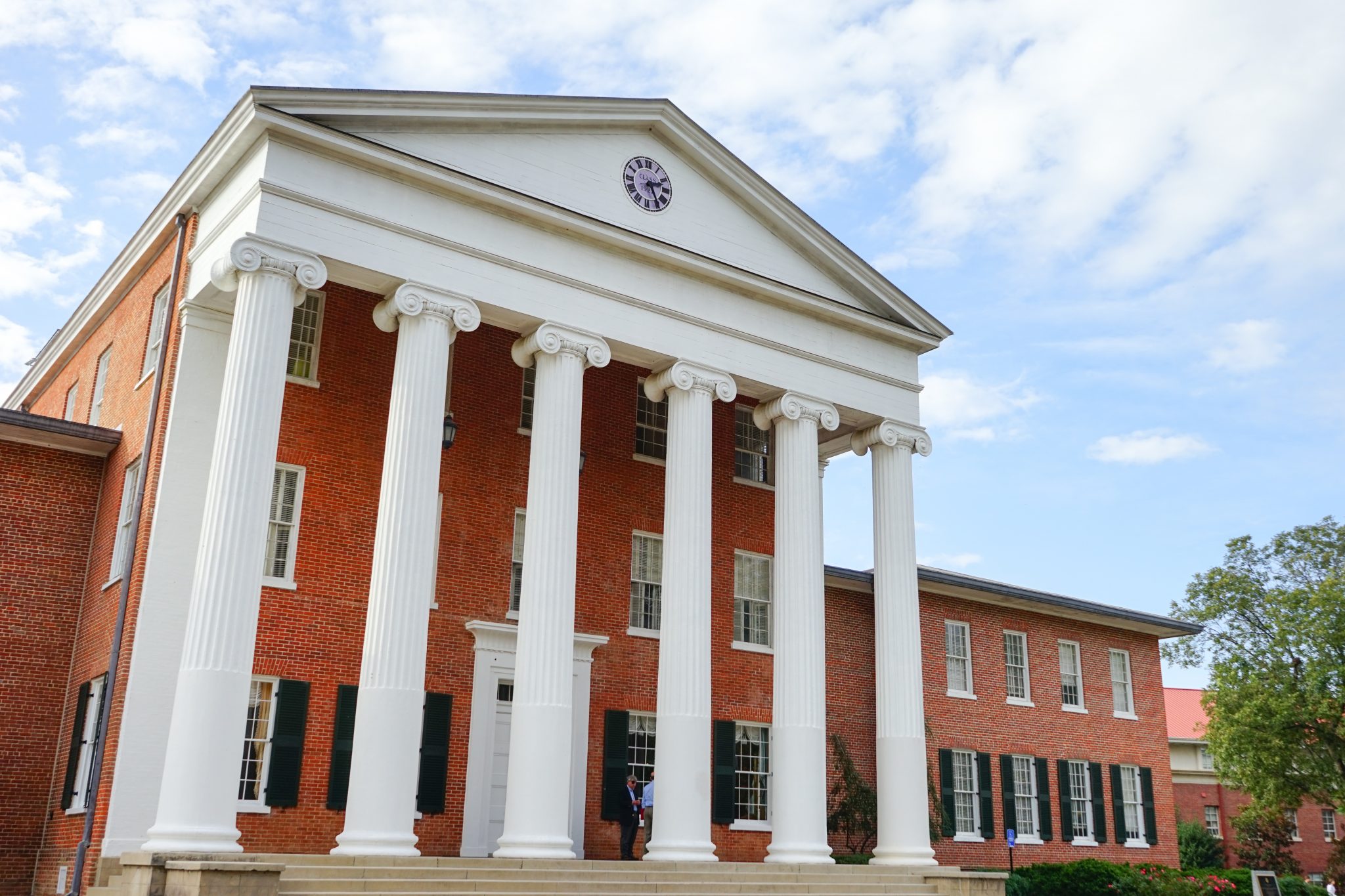 In Title 39, Chapter 9 of the Mississippi Code is found a prohibition on strikes by teachers:

(3) No certified teacher, group of certified teachers or teacher organization shall promote, encourage or participate in any strike against a public school district, the State of Mississippi or any agency thereof.

That same Mississippi statute provides that the state’s chancery courts must hear any complaints about teachers striking, and in the event it is found that a teacher has gone on strike the courts are required to terminate that teacher’s employment.

The University of Mississippi employs a sociology professor named James Thomas, a diehard leftist who two years ago echoed Rep. Maxine Waters’ admonition to Democrats to verbally abuse Republican senators in public. “Don’t just interrupt a Senator’s meal, y’all,” he tweeted. “Put your whole damn fingers in their salads. Take their apps and distribute them to the other diners. Bring boxes and take their food home with you on your way out. They don’t deserve your civility.”

Last year, Thomas went even further. “MAGA teens are modern day Hitlerjugend,” he tweeted. “Got a uniform and everything.”

And last weekend, he tweeted, “[h]e doesn’t care if you die,” in response to news that Mississippi’s Republican Gov. Tate Reeves was planning a Christmas party or two at the governor’s mansion amid the COVID threat.

So that’s who James Thomas is.

And in September, James Thomas went on strike.

The event in question was dubbed “Scholar Strike For Racial Justice,” and it was a two-day walkout by a smattering of higher education faculty taking place on September 8-9 as a Black Lives Matter–allied action.

Scholar Strike is an action inspired by the NBA, WNBA, Colin Kaepernick and other athletes, to underscore the urgent importance of addressing racism and injustice in the United States. Conceived via a tweet by Anthea Butler, this is designed to call awareness to the racial climate in America, and the rash of police shootings and racialized violence.

Scholar Strike is both an action, and a teach-in. Some of us will, for two days, refrain from our many duties and participate in actions designed to raise awareness of and prompt action against racism, policing, mass incarceration and other symptoms of racism’s toll in America.

Scholar Strike is open to everyone to participate in on college and university campuses- faculty, staff, grad students, and administrators who are committed to anti-racism, and advocating for racial justice for BIPOC in all areas of society.

Thomas made no secret of the fact that he was going on strike, he encouraged others to join him, he refused to teach three classes scheduled during those two days, he refused to respond to emails and other communication from students during that time, and he informed them in advance he would not be available.

Mississippi’s State Auditor Shad White is charged with policing the spending of state funds, and as you might imagine his portfolio includes stepping in when those state funds are spent illegally.

The University of Mississippi paying striking professors would be a textbook example of such illegality. Consequently, White launched an investigation into Thomas. He sent investigators from his office to Oxford to interview Thomas, to review documents, and to write a report.

Due to that report, White is calling for Thomas to be fired and for him to repay the University of Mississippi for the two days’ pay he took illegally when he went on strike in direct violation of Mississippi law, plus the cost of the investigation — just under $2,000.

This isn’t a complicated case. It’s extremely simple. If you’re a teacher employed by a public education body in Mississippi, you are prevented from going on strike. Thomas, who was given tenure at the University of Mississippi, had to have known this to be true, as Mississippi is not a particular outlier in having such a prohibition on the books, and yet he went on strike.

The thing about civil disobedience is that if it’s properly executed, those employing it accept that what they’re doing is against the law and they willingly bear the consequences. Meaning that if James Thomas was sincere in wanting to do something for “racial justice” in America, he wouldn’t fight efforts to remove him from his job as per Mississippi law.

But James Thomas is no Thoreau; neither is he a Martin Luther King.

Instead, Thomas, who not only has tenure at the University of Mississippi but last year was elected the chair of the Chancellor’s Committee on “Academic Freedom and Faculty Responsibility,” has ginned up a sizable controversy in the Magnolia State over his own minor role at Ole Miss.

First came the lawyer. Thomas hired attorney Rob McDuff, who immediately launched into a denial that a strike is a strike:

“If the auditor wants to pay (Thomas) extra for the personal days he has not used, the weekends and holidays he has worked over the years, including those he worked preparing the lesson plan that week, then maybe we can talk about whether he should pay any money because of his participation in the Scholar Strike,” McDuff said in a statement.

McDuff has argued Thomas, who has tenure, did not halt work to receive better work conditions or pay, which is how state law defines a strike. Instead, Thomas was protesting racism and injustice.

State law in Mississippi defines a strike as a work stoppage “for the purpose of inducing, influencing or coercing a change in the conditions, compensation, rights, privileges or obligations of public employment.” How does the pursuit of “racial justice” not include such a change? If Thomas’ position is that “racial justice” has been achieved at the University of Mississippi, then why would he feel the need to participate in the Scholar Strike?

Seeing that the entire public-policy purpose of the Mississippi ban on public-employee teacher strikes is to safeguard the delivery of education to the public that taxpayers pay for, exactly what does McDuff think the difference is between Thomas striking for an extra grand a year and his striking for “racial justice”?

And yet at the University of Mississippi, this patent dishonesty is rewarded with high-sounding admonitions against White for his attacks on “academic freedom”:

The state auditor demanded nearly $2,000 from a tenured professor who took part in a two-day “scholar strike” to bring attention to racism and injustice.

Essentially, you’re to believe that “academic freedom,” which University of Mississippi Chancellor Glenn Boyce says is the most important principle on that campus, includes the freedom to defraud taxpayers and break the law.

This in a society that is busily canceling people for questioning the integrity of an election while some 20 state attorneys general have joined a suit in front of the Supreme Court on that very subject. And the same people who are lambasting Shad White under the guise of “academic freedom” are unperturbed by Big Tech censoring and otherwise imposing consequences for discourse they don’t like.

Meaning that YouTube’s terms of service are more just and consequential than duly-passed state laws. Because of “academic freedom,” you see.

This is an excellent opportunity for the state of Mississippi to impose the same kinds of consequences the Left is gleefully imposing on those who dissent from its worldview. The University of Mississippi is, after all, a monolithically leftist campus now, conservative professors having been hounded from its halls years ago under cries of “racism” and “bigotry.” If things have become so bad there that willful lawbreaking is an expression of “academic freedom,” then one is entitled to question whether that university is so corrupt as to do more harm than good to its students.

Here’s hoping Shad White is successful in his attempts to get James Thomas fired. And if that creates such a stir that it turns every eye in Mississippi toward what a leadership vacuum and outright intellectual farce is being perpetrated at Ole Miss, so much the better.