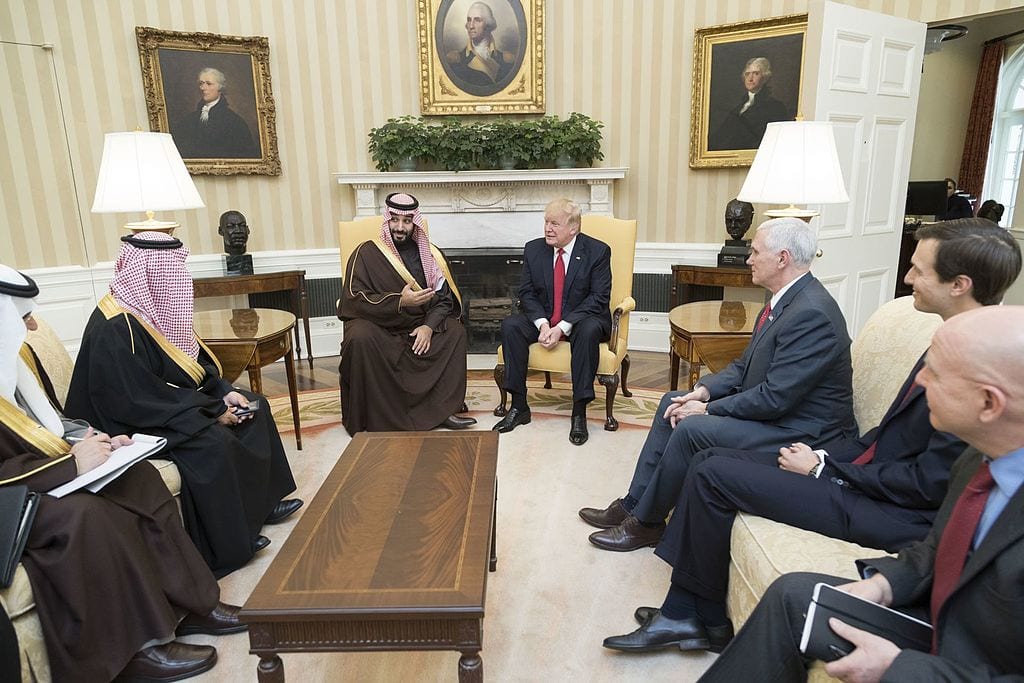 In March, Saudi Crown Prince Mohammed bin Salman told 60 Minutes that “Saudi Arabia does not want to acquire any nuclear bomb. But without a doubt, if Iran developed a nuclear bomb, we will follow suit as soon as possible.”

Prince bin Salman (“MBS”) is now leading the negotiations with the U.S. Department of Energy to purchase the designs for nuclear power plants to be built in his nation. Shortly after his statement on 60 Minutes, his energy minister insisted that Saudi Arabia would enrich its own nuclear fuel.

There’s a huge obstacle in these negotiations: the apparent responsibility of MBS for the murder of Washington Post journalist Jamal Khashoggi in the Saudi consulate in Istanbul on October 2.

Since soon after Khashoggi disappeared into the consulate, President Trump has been prodded by the press to speculate on the impact of the event if Khashoggi were kidnapped to Saudi Arabia or murdered by the Saudis. Trump repeatedly did.

Trump’s comments painted himself into a corner. His initial statement was that it was a “terrible precedent” and “we’re being very tough.” He later said that if MBS were responsible, “we would be very upset and angry if that were the case.”

The CIA concluded that it had “high confidence” in its conclusion that MBS was responsible for Khashoggi’s murder. The CIA’s conclusion was leaked either by the CIA to pressure President Trump to act against MBS or by Trump or his staff to pressure MBS.

Trump’s November 20 statement, which came after the leak of the CIA’s conclusion, was neither angry nor tough: Trump disagreed with the CIA, saying that maybe MBS knew about the murder and maybe he didn’t.

It’s impossible to believe that Khashoggi’s murder was done without MBS’s knowledge. He either ordered the murder or acquiesced in it. The president and Secretary of State Mike Pompeo have both placed the Khashoggi murder lower on the scale of importance than our relationship with Saudi Arabia. That’s a choice. But the matter doesn’t end there.

Four European nations — Germany, Denmark, Finland, and the Netherlands — have signed an embargo against arms sales to Saudi Arabia as a sanction over the Yemen war. That embargo has been approved by the EU parliament and by Austria, Norway, Belgium, and Switzerland.

That won’t be the end of the matter either, because our alliance with Saudi Arabia is directly threatened by the Khashoggi murder.

Our relationship with the Saudis is strategic. It exists despite — not because of — our differing cultures and values.

The Saudis are Wahhabis, a form of radical Islam going back to the 19th century. They spend tens of billions of dollars on Islamic madrassas in the U.S. and around the world spreading that form of Islam wherever they can.

We can never be allies of Saudi Arabia in the same sense as we are with the UK, Japan, or South Korea. Their religion — as with the other Islamist nations — cannot separate church from state. Their nation does not follow what we understand to be the rule of law. Their “rule of law” is that of Islamic religious law. It doesn’t respect, far less ensure to Saudi citizens, any of the Constitutional rights Americans enjoy. Saudi Arabia has more in common with Pakistan than it has with us.

Our tolerance of the Saudis’ conduct has already gone too far. Thanks to Wikileaks publishing classified State Department emails, we know that some members of the Saudi royal family were — as late as 2009 — the principal funding source for al-Qaeda. It’s a safe bet that some of the Saudi royals — there are hundreds — still help bankroll al-Qaeda and a host of other terrorist groups.

That tolerance was the choice of both presidents Bush and Obama. Both chose to tolerate Saudi sponsorship of terrorism over attempting to punish the hyper-sensitive Saudis for it. Trump, with his shrug at the Khashoggi murder, has reaffirmed that choice.

Trump’s shrug is understandable because he has bet too much on MBS and Saudi Arabia. They are supposed to be the key to his Middle East peace plan encompassing Israel and the Palestinians. They have helped keep the price of oil depressed, which damages not only Iran but Russia as well.

Saudi Arabia is one of Iran’s most powerful adversaries in the Middle East, but its power isn’t evident in its war against Iranian-backed Houthis in Yemen. It’s something between a stalemate and a disaster and MBS is evidently responsible for that.

In response to the Khashoggi murder, Trump has ordered sanctions against several Saudis believed to be involved in the killing and the cessation of air-refueling support of the Saudi war in Yemen. Congress and the media will demand more actions to punish the Saudis.

Thirty-three-year-old MBS has become a liability to the alliance because of the failing war in Yemen and the Khashoggi murder. Fortunately, he is entirely disposable. It’s not at all certain that he will become king on his father’s death. We should be quietly telling King Salman and other senior Saudis that it would be far better if he didn’t. Whether he is replaced as crown prince by his father or disposed of as was Khashoggi matters not at all to us.

The New York Times wrote a report on these events a few days ago entitled, “Saudis Want a U.S. Nuclear Deal. Can They Be Trusted Not to Build a Bomb?”

Of course they can’t. But that doesn’t mean we should deny them a deal to build nuclear power plants. Several compelling reasons obtain.

First and foremost is that if we deny Saudi ambitions to build nuclear power plants, other nations will quickly line up to compete for the opportunity. Russia, China, France, and possibly Pakistan will all seek to fill the gap, and one — or more — will succeed.

If the Saudis turned to Russia, China, or France to build their nuclear power plants, it would signal a realignment away from their alliance with us and from our influence over their actions. It would be very easy for the Saudis to cancel their purchases of U.S. weapons and substitute Russian or Chinese arms.

Some will argue — incorrectly — that a third reason for us to help build Saudi nuclear power plants is that they are a counterweight against Iran. That idea is premised on the thought that the Saudis’ interests against Iran coincide with ours, which is only partially true.

Iran is Saudi Arabia’s enemy because the former is a Shiite nation and the latter is Sunni. The Shiite-Sunni war has gone on since the death of Islam’s founder, Mohammed, in 632 AD. Because each sect believes the other to be apostate, they can never peacefully co-exist.

That means if one has nuclear weapons, the other must as well to create an Islamic version of “mutually-assured destruction.”

It’s unlikely that the Saudis are as sanguine about Iran’s nuclear pursuits as are our European allies. The UK, France, and Germany are doing everything they can to revive the Obama nuclear weapons deal with Iran. The European Union has enacted a “blocking statute” to prevent European companies from complying with U.S. sanctions against Iran and are trying to create a banking system operating in Euros and Rials to evade U.S. financial sanctions.

The Saudis understand that the Obama deal’s inspections regime is a joke, preventing inspection of the most suspicious sites and enabling Iran to self-inspect others. They know Iran has partnered with North Korea in developing nuclear weapons and the missiles capable of delivering them.

In all probability, Iran will within the next year or less — if it hasn’t already — obtain nuclear weapons by developing its own or purchasing them from North Korea.

With or without MBS, that will mean Saudi Arabia will build or buy its own nukes. There have been unsubstantiated rumors for at least five years that Pakistan was selling nuclear weapons to the Saudis. They probably haven’t done so yet, but there is no reason for them not to do so.

Through the latter half of the 20th century the nuclear opponents — America, Russia, China, Britain and France — were divided by ideology and political ambitions. Although they came close to nuclear war several times, they managed to avoid it.

In the 21st century, with the Saudi-Sunnis opposing the Iranian-Shiites, the added element of irreconcilable religious conflict may not allow them to avoid a nuclear conflict.