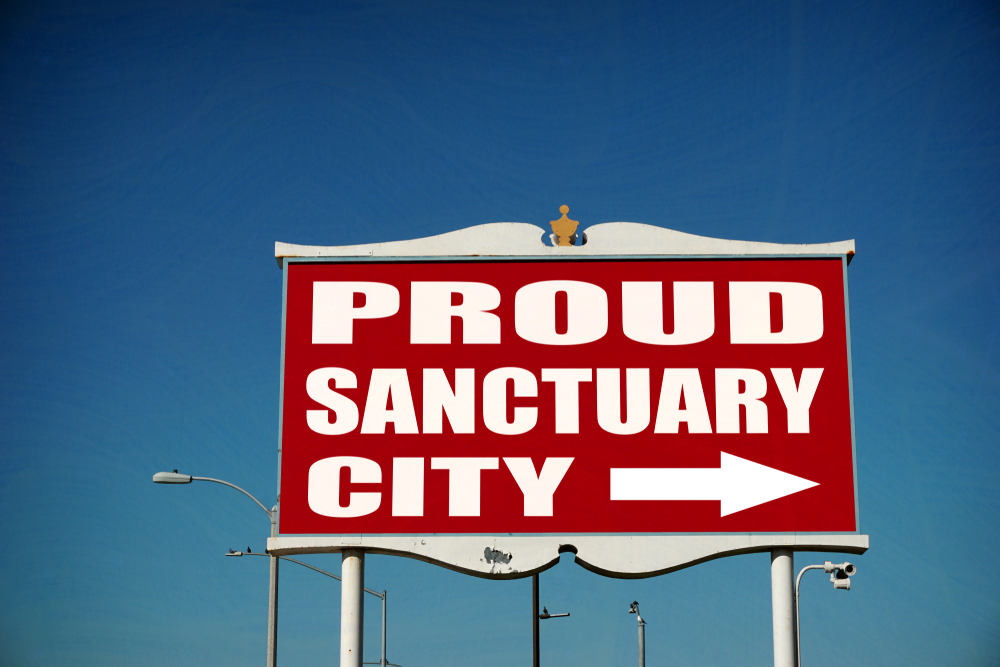 More on those cases later. In the Democratic fairy tale, sanctuary policies signal to victims of crime who are in the country illegally that they can work with police without fear of deportation — improving public safety. Sanctuary cities, goes the story, are safe cities.

This would be funny — if sanctuary policies haven’t gotten innocent people hurt (or worse), that is. (One of the more egregious examples is discussed here.)

In many sanctuary cities, the list of which includes New York, Philadelphia, Chicago, Los Angeles, and San Francisco, local jails are instructed to not provide advance notice of a deportable alien’s release date to federal immigration officials.

Sanctuary policies, in other words, shield criminal illegal immigrants — individuals who, with no right to be here in the first place, often have reentered the U.S. after a previous removal, engage in criminal activity (which is how they find themselves in local jails).

For years, sanctuary cities were having their cake and eating it too, by getting federal Byrne Program law enforcement grants while stymying federal immigration enforcement activities. Donald Trump’s Justice Department sought to end this.

For 2017 Byrne Grant applicants, the DOJ required applicants to have policies ensuring that jails will respond as early as practicable to a request from the Department of Homeland Security (DHS) for notice of an alien’s release date (the notice condition), and that DHS officials will be allowed into jails to conduct voluntary interviews with removable aliens (the access condition).

Grantees also had to certify compliance with 8 U.S.C. §1373, which bars state and local governments from prohibiting the sharing of certain immigration information between local officials and immigration authorities.

Now let’s jump to 2020. The Ninth Circuit Court of Appeals, in City and County of San Francisco v. Barr (incorporating by reference much of the legal analysis in its City of Los Angeles v. Barr decision), opined that the administration lacked the legal authority to impose the conditions — affirming a lower-court ruling from 2018 siding with San Francisco and California, who had sued over them.

In November, the Trump administration petitioned the Supreme Court to review the Ninth Circuit ruling — which petition is one of the cases now dismissed by Joe Biden’s DOJ.

The odds strongly favored the high court taking the case, and not just because of its obvious importance; there is also a federal-court split.

Those petitioners, in turn, asked the Supreme Court to review the Second Circuit ruling — the other petition now dismissed by agreement of all parties (a separate petition filed by New York City has also been dismissed).

Had Biden not been elected, the federal government would have won this sanctuary city fight. Simply put, the notice and access conditions are authorized by Congress.

The attorney general is empowered to “issue rules to carry out” the grant program’s provisions (34 U.S.C. §10155).

Congress also requires grant applicants to “maintain and report such data, records, and information (programmatic and financial) as the attorney general may reasonably require” (34 U.S.C. 10153(a)(4)); and certify, “in a form acceptable to the Attorney General,” that “there has been appropriate coordination with affected agencies,” (34 U.S.C. 10153(a)(5)(C)).

That’s only a portion of the legal authority for DOJ’s 2017 conditions. There’s no space to overview the legal arguments. Suffice to say that the Ninth Circuit read limitations into the statute not put there by Congress.

This includes construing the requirement that “there has been appropriate coordination with affected agencies” as requiring coordination only with those agencies funded by Byrne Grants.

Under this narrow reading, DHS, which is certainly affected by local law enforcement actions relative to aliens, doesn’t count, as it’s not Byrne-funded. Congress could have specified such a limitation. It didn’t.

The Ninth Circuit panel also construed (make that misconstrued) the appropriate coordination obligation as ending once a jurisdiction has filed its Byrne Grant application. The reason? The phrase “there has been” is past tense.

As the Second Circuit observed in New York v. U.S. Department of Justice, “what makes that coordination ‘appropriate’ is that it will establish the parties’ relationship and the sequence of their conduct throughout the grant period,” (emphasis added).

It is remarkable how Chevron deference — the doctrine whereby courts defer to any reasonable statutory interpretation put forth by a federal agency — disappeared when Donald Trump’s DOJ tried to disincentivize highly destructive, but politically correct, sanctuary city policies.

In any case, the Second Circuit got it right. In agreeing to dismiss the Supreme Court petitions, the Biden administration has snatched defeat from the jaws of victory.

But the administration doesn’t want to defeat sanctuary cities. Like the many congressional Democrats appearing as amici in the above litigation to support sanctuary cities, including former California Sen. Kamala Harris, it agrees with them.

For Americans concerned about public safety, as well as the federal government’s basic obligation to remove criminal aliens, this may be as disturbing as the Biden-made crises unfolding at the southern border.