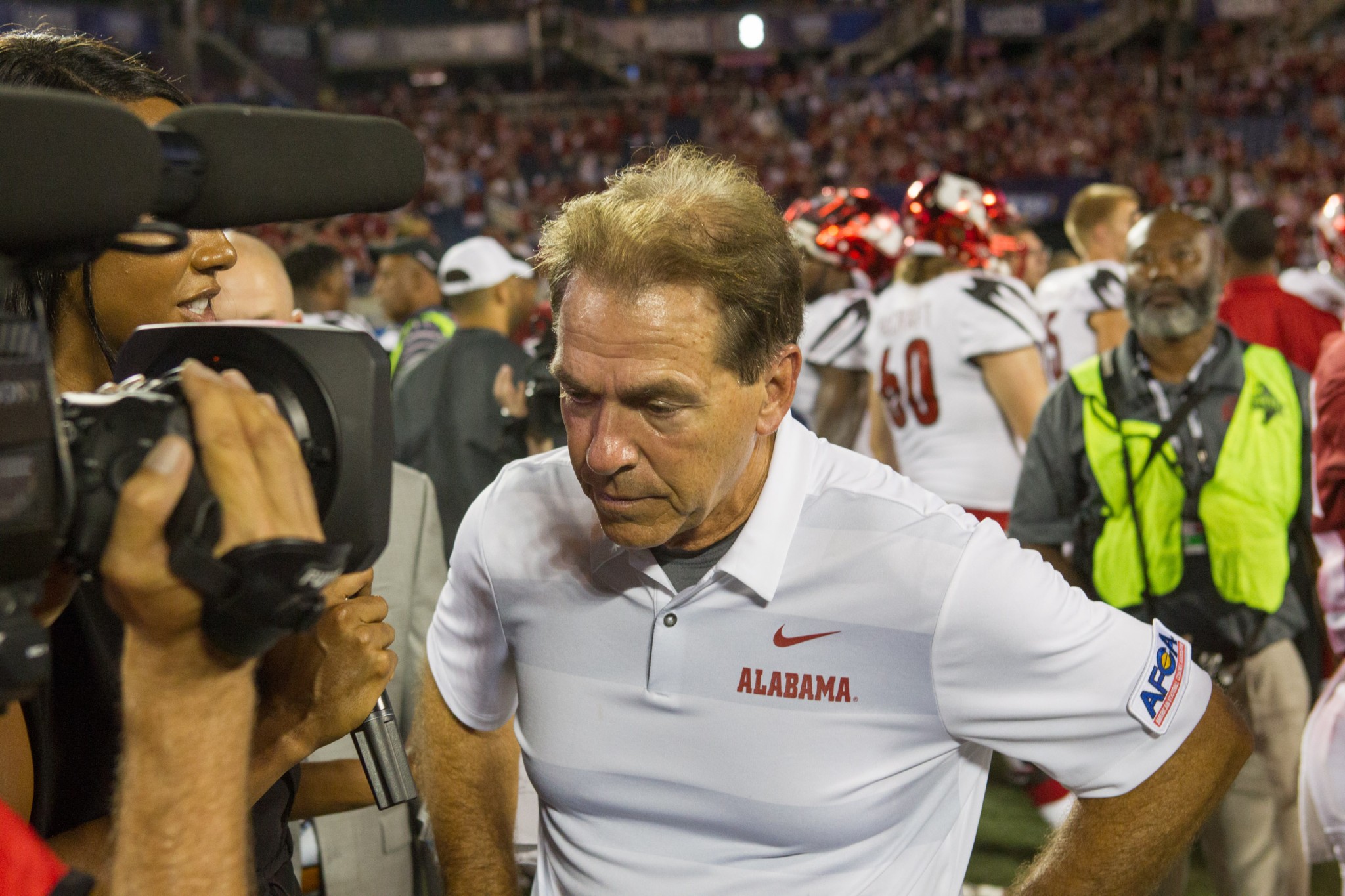 Nick Saban, coach at Alabama, the winningest program in the last two decades — by a long shot — said this about SEC rival Texas A&M, coached by one of his former assistants, Jimbo Fisher: “A&M bought every player on their team. Made a deal for name, image and likeness. We didn’t buy one player.”

The sports commentariat, predictably, is freaking out. Members of the college football coaching fraternity, especially those cashing paychecks with seven-digit numbers, simply do not throw down on each other about recruiting practices like pro wrestlers talking trash in a post-match interview room.

Even so grizzled a veteran of the airwaves as Paul Finebaum, who has been bantering with good-ole boys about SEC football on the radio for thirty years — and has heard everything — said he was “shocked” by such incendiary comments coming from a man not known to run his mouth. “The college football world, on a late May day,” said the Mouth of the South, “is upside down.”

Fisher, as you would expect, returned fire the next day. He denied everything — the Aggies “never bought anybody. No rules were broken.” He called Saban’s remarks “despicable” and Saban himself a “narcissist,” or, alternately, “God,” and invited curious parties to look into the seven-time national championship coach’s background if they wanted to find bona fide shenanigans.

Go dig into how God did his deal. You may find out … a lot of things you don’t want to know. We build him up to be the czar of football. Go dig into his past. Or anybody that’s ever coached with him. You can find out anything you want to find out. What he does and how he does it. And it’s despicable.

A day later, Saban said he really didn’t say what everybody was saying he said — he wasn’t saying A&M did anything illegal. His gripe was with the system. But the SEC commissioner had heard enough. He warned the two verbal pugilists to cool it — their spat “creates a distraction from seeking solutions for the issues facing college athletics today,” he said.

One of those “issues” is what Saban was complaining about. The NCAA, last summer, seeing the Supreme Court strike a blow against its monopoly in college athletics, went into damage-control mode and said college jocks could make money for their “name, image, or likeness” (NIL). But, apart from a few quite general dictates — no direct “pay for play,” no use of NIL as a recruiting enticement, no direct contact of jocks by boosters, athletes would have to do something for the deals to be legit — the governing body pretty much let things ride and threw the ball into Congress’s court to resolve. Which it hasn’t. (Did I have to add that?)

The result has been a lot of college athletes making money for doing commercials, hosting camps, signing autographs, plumping products on social media, and so forth. But another result of the new legislation has been a recruiting free-for-all.

Although colleges aren’t supposed to use NIL deals as recruiting enticements, I’ve got a beach-front lot just outside Lubbock to sell you cheap if you think they aren’t. The big schools — 37 of the 65 schools in the Power Five conferences, and 11 of the 14 SEC schools — have established “collectives.” These are companies, not associated with the school, organized by usually well-heeled boosters who pool money and direct it toward athletes through endorsement deals.

A coach cannot offer a high school recruit an endorsement deal straight up, but he can boast about the wad that has accumulated in an associated collective, available to athletes. That seems like a recruiting enticement to me.

Which was Saban’s larger point. Saban has come out in favor of NIL, and has bragged that 25 of his players netted over $3 million in endorsement deals this past year. But they did so “the right way,” he said. “I told our players that we’re gonna have a collective, but everybody’s gonna get the same amount of money from that collective. Now you can go earn however much you want, and I tell the recruits the same thing,” Saban said on Wednesday. “Because our job is not to buy you to come to school here.”

There may be more to Saban’s outburst, however. The college football landscape, pre-NIL, was a level playing field, at least on paper. All schools abided by the same rules — they had equal numbers of scholarships and could bestow on athletes the same health-care and academic-aid packages.

In that world, Alabama held a considerable recruiting advantage. It had a great coach, who needed two hands to display all his national championship rings — one at LSU and six at Alabama. His Alabama teams have been ranked first in the country at some point in each of the past 14 seasons. Every year, it seems, before playing a single snap, the Tide is penciled into the college football playoff field. They provide a pipeline to the NFL; 90 have been drafted in the past 10 years, 30 of those in the first round. Wave that résumé in a recruit’s face, and more times than not you’ll get a signature on his letter of intent.

NIL threatens that, because it adds outside money to the process. Now that capitalism has shown up in big-time college sports, and recruits are allowed to shop their talents to all bidders, the schools with the most millionaire boosters will have a leg up.

The trigger for Saban’s remarks, after all, was last February’s recruiting race. Texas A&M reeled in the nation’s No. 1 class, snagging four of the top eight players in the country, and 10 of the top 50, according to reports. It was the first time since 2010 that any school not named Alabama or Georgia had won the recruiting sweepstakes, and this year’s class has been called the best in college football history.

Saban’s recruiting class came in at No. 2. That defeat, coupled with a loss to Fisher on the field last fall, 41–38 — the first time one of his many former assistants had defeated him as a head coach — has turned him into a worry wart.

For, if it comes down to a millionaire booster contest, Texas, Texas A&M, USC, and any number of other schools beat Alabama hands down. Alabama, as a state, is not in the same financial stratum as Texas, a state burgeoning with new population and awash in petrodollars. The fan base for the Crimson Tide might equal that of the Texas schools in intensity, but the pockets in the Lone Star State are a lot deeper.

Saban v. Fisher, round 2, will be must-watch TV. Be sure to mark October 8 on your calendar. No dueling press conferences that day — A&M and Alabama will decide it on the field.