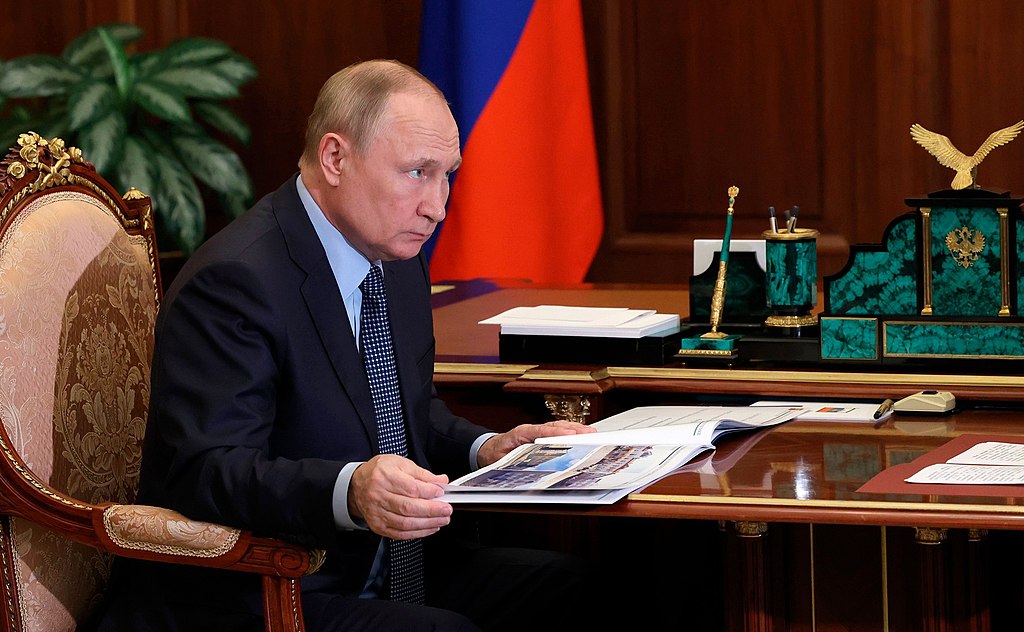 Pope Francis has walked on eggshells to avoid the wrath of Vladimir Putin and, likewise, of the Russian Orthodox Church, which has long presented an altogether intractable if not impossible set of challenges for the Roman Catholic Church, recently rearing its ugly head yet again in the Ukraine war (that’s a separate column altogether). Francis has repeatedly and delicately prayed for the people of Ukraine and of Russia, each step of the way carefully avoiding poking a stick at the bear in the living room: Vladimir Putin.

That appears to have changed.

Francis seems to have incited Putin in a major interview with his fellow left-wing Jesuits at America Magazine. For an idea of how far left America is, in July 2019 it ran a jaw dropper, “The Catholic Case for Communism,” adorned with a photo of Bolivian crackpot Evo Morales handing a “communist crucifix” to a grinning Francis. That bizarre piece, which could’ve once led to the literal excommunication of the America editorial staff in better days (namely, Pope Pius XII’s 1949 “Decree Against Communism”), surely left even Putin bewildered.

And hence the irony that it took the Jesuit pope and his fellow Jesuit liberals at America to team up to finally set off Putin and the Russkies. To wit, here was what Francis was asked by America’s Gerard O’Connell:

Many in the United States have been confused by your seeming unwillingness to directly criticize Russia for its aggression against Ukraine, preferring instead to speak more generally of the need for an end to war, an end to mercenary activity rather than Russian attacks, and to the traffic in arms. How would you explain your position on this war to Ukrainians, or Americans and others who support Ukraine?

Kudos to O’Connell. Many indeed have been confused by that. Actually, many have been confused and downright outraged by Francis’ silence on China and Nicaragua. We actually understand his reticence on Russian aggression. He doesn’t want to rattle the cage of Mad Dog Putin. But this time, Francis did just that. Here is the entirety of his response to O’Connell:

When I speak about Ukraine, I speak of a people who are martyred. If you have a martyred people, you have someone who martyrs them. When I speak about Ukraine, I speak about the cruelty because I have much information about the cruelty of the troops that come in. Generally, the cruelest are perhaps those who are of Russia but are not of the Russian tradition, such as the Chechens, the Buryati and so on. Certainly, the one who invades is the Russian state. This is very clear. Sometimes I try not to specify so as not to offend and rather condemn in general, although it is well known whom I am condemning. It is not necessary that I put a name and surname.

On the second day of the war, I went to the Russian embassy [to the Holy See], an unusual gesture because the pope never goes to an embassy. And there I said to the ambassador to tell [Vladimir] Putin that I was willing to travel on condition that he allowed me a tiny window to negotiate. [Sergey] Lavrov, the foreign minister at a high level, replied with a very nice letter from which I understood that for the time being it was not necessary.

I spoke to President [Volodymyr] Zelensky three times by phone. And I work in general with receiving lists of prisoners, both civilian prisoners and military prisoners, and I have these sent to the Russian government, and the response has always been very positive.

I also thought of traveling, but I made the decision: If I travel, I go to Moscow and to Kyiv, to both, not to one place only. And I never gave the impression that I was covering up the aggression. I received here in this hall, three or four times, a delegation from the Ukrainian government. And we work together.

Why do I not name Putin? Because it is not necessary; it is already known. However, sometimes people latch onto a detail. Everyone knows my stance, with Putin or without Putin, without naming him.

Effectively, Francis finally named Putin, or at least come as close as possible without putting a name and surname.

In response, Vlad’s Kremlin had a collective cow. Dictators tend not to take criticism well. And Mad Dog let his growling displeasure known through the organs of Russian state power, beginning with the longtime preeminent mouthpiece of Soviet-communist propaganda, TASS. In a Nov. 29 piece headlined “Russian senator fires back at Pope Francis’ race-baiting remark,” where Konstantin Kosachev (a major Russian politician) played the role of Putin spokes-puppet, the Russian news agency reported:

Deputy Speaker of Russia’s Federation Council (upper house) Konstantin Kosachev has fired back at Pope Francis’s racially charged remark about the supposed ‘cruelty’ of Chechen and Buryat troops in the zone of Russia’s special military operation in Ukraine as completely unacceptable, when ushering in a historical and documentary exhibition dedicated to the Great Patriotic War.

Pope Francis earlier said in an interview with the US media that “the cruelest are perhaps those who are of Russia but are not of the Russian tradition, such as the Chechens, the Buryats and so on.”

“From my point of view, the statement is completely unacceptable both in form and content. As for its form, it’s not for the leader of the Roman Catholic Church to comment on a situation that neither the state (the Vatican) nor the Roman Catholic Church has anything to do with, I would like to make it clear,” Kosachev said, when asked to comment on the pontiff’s statement.

As for content, Pope Francis’s remarks are “completely false” and “it’s surprising that they came from one of the leaders of Christianity,” the Federation Council deputy speaker said.

According to Kosachev, the pontiff’s statement draws “a dividing line between peoples and religions.” “It is totally unacceptable in today’s world and I can only regret that Pope Francis made an enormous mistake in this case, which can only have a negative impact on the conflict and will in no way help the parties find common ground and a way out of the crisis through reconciliation,” Kosachev emphasized.

This is fascinating and revealing at several levels.

For starters, it yet again shows how the Russians cunningly co-opt the language of the American Left in dishing their propaganda. Our left-wingers have taught the Russkies that the best way to curry favor with the “depraved” West (as Putin has rightly called it) is to race-bait. Note that from the start of the Russian invasion into Ukraine last February, Mad Dog barked about “fascists” and “Nazis” and springtime for Hitler in Kyiv. Vlad knew which buttons to push to trigger our snowflakes. Unfortunately for him, his progressive language was in vain, because tinfoil-hat Democrats were predisposed to hate him because they convinced themselves that Mad Dog in 2016 had conspired with Orange Man Bad to steal an election from their beloved Hillary. These liberal election-deniers were also predisposed to loathe Putin because he opposes same-sex marriage, drag queen story hour, and other high-agenda items of Joe Biden and the Democrats.

And so, in the case of Francis, here are Putin and pals again taking a page from the Democrats’ playbook, accusing the pontiff of “race-baiting” in his interview with America Magazine. (Fr. James Martin might need to drop by America’s offices to host a few sensitivity-training sessions.)

But look more closely at the charges against Francis in the TASS piece, because they’re a big deal coming from Russia:

Francis’ statement is deemed “completely unacceptable.” Francis is solemnly lectured that this matter of war and peace is something that the leader of the Roman Catholic Church should have nothing to do with nor even comment on. The pope is framed as bearing false witness — “completely false” — and this is “surprising” behavior coming from “one of the leaders of Christianity.” What Francis has done is judged an “enormous mistake,” “totally unacceptable in today’s world,” in “no way help[ing] the parties find common ground and a way out of the crisis through reconciliation.”

And as we know, of course, Vlad the Impaler (as our Dan Flynn dubbed him) has worked damned hard at reconciliation with those belligerent Ukrainian aggressors.

Moreover, the pontiff’s statement is also a cardinal sin against diversity. It draws “a dividing line between peoples and religions.” Again, more of the “bigotry”-bunkum language borrowed from the Left, which the Russians seem to relish having fun with (can’t blame them there).

The TASS statement is just one example I’ve highlighted here. As I write, the Russians are issuing more chest-pounding protests along these lines, at TASS, at the website of the Foreign Ministry, and more (click here and here, among others).

The bigger picture is that this represents a sudden personalization and escalation in the Russian leadership’s strained relations with the Vatican and this pope. And by “leadership,” I mean religious as well as political. Make no doubt that Pope Francis feels it. And make no doubt that it signals further rocky times ahead with Vladmir Putin, Russia, and the war against Ukraine.