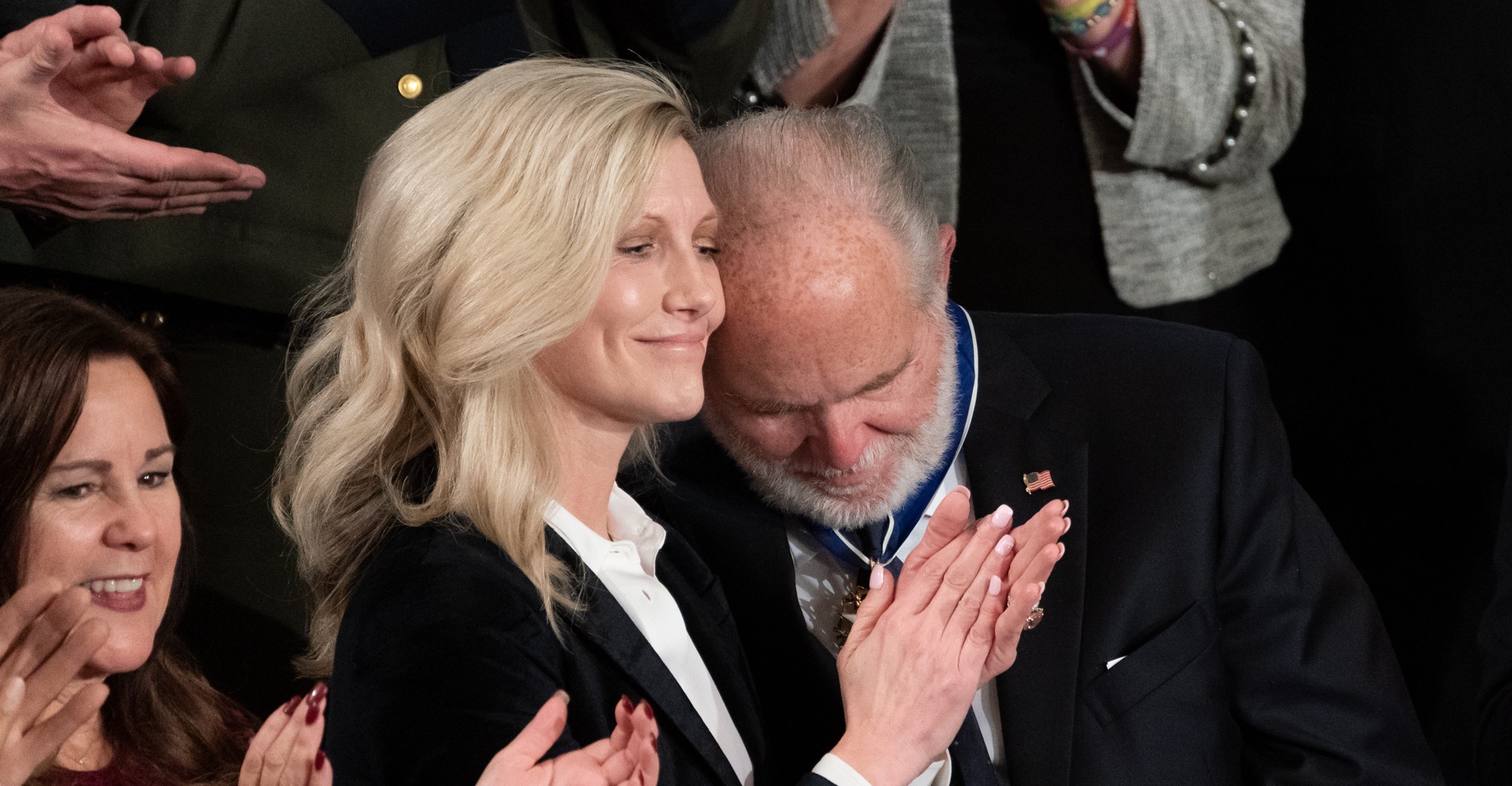 Leave it to Rush.

Even as death approached, there was Rush Limbaugh planning his next project. Sadly, it would be his last, and he wouldn’t be able to present it himself. But his beloved wife, Kathryn, will not let the project fade, and in doing so Kathryn ensures that Rush’s legacy will live on, continuing to shine as an example of Rush’s eternal faith in America and the American dream.

The just-announced project is called the “Great American Business Award.” You can learn all about it at — where else — Rush’s still quite active website, found here.

Right on the first page is this message from Kathryn:

Rush firmly believed that you, the American people, make the country work! Our great nation is filled with extraordinary individuals who work tirelessly to create small businesses, produce products, and generate the economy.

We hear stories every day about members of this audience who were inspired by Rush to pursue their dreams in any number of ways, including starting their own business.

Over the course of the next weeks and months, we will be recognizing listeners with the Rush Limbaugh – Great American Business Award. If you would like to be considered for this honor or know of someone deserving to be nominated, please send us your story below. Please also include how Rush impacted you over the years, both personally and professionally.

Our best days are ahead.

Recall the unreal words of then-President Obama? He told Americans who built small businesses this, as headlined in the day at Fox News:

Obama to business owners: ‘You didn’t build that’

“If you were successful, somebody along the line gave you some help. There was a great teacher somewhere in your life. Somebody helped to create this unbelievable American system that we have that allowed you to thrive. Somebody invested in roads and bridges. If you’ve got a business, you didn’t build that. Somebody else made that happen,” he said. “The Internet didn’t get invented on its own. Government research created the Internet so that all the companies could make money off the Internet.”

Of course other people contribute to the success of a business. But the primary driver always is and always will be the person with the dream and the relentless persistence to make that dream a reality. Not to put too fine a point on this, but just who paid for all those “roads and bridges”? Who paid for the “government research” that created the internet? Take a walk around Washington, D.C., with its mammoth government office buildings stuffed with tens of thousands of well-paid bureaucrats and know with certainty that the bill for all of that is being paid by American taxpayers, including the builders of small business.

Rush’s award is all about cheering on and putting the spotlight on Americans who not only make their own dream business come true but in doing so really do make America great.

No one was a better example of making a dream a business reality than Rush Limbaugh himself. The millions of Rush fans in his audience are well versed on the story of the boy from Cape Girardeau, Missouri, who set out with his teenage love of radio to make his own radio dream come true.

To his father’s dismay — his father being part of a considerable family of lawyers — Rush made an unenthusiastic and decidedly brief stay in college and set out to pursue his radio dream.

There was his first away-from-home gig at WIXZ radio, a top 40 station in McKeesport, Pennsylvania, just outside Pittsburgh. A mere 18 months later Rush was fired for, goes the tale, a “personality conflict” with the program director. Next up, a night-time slot on Pittsburgh’s KQV. (It took me awhile to realize that he succeeded Pittsburgh’s great Jim Quin, whose show, which he co-hosts with Rose Tennent, I have been on many times over the years.)

Then came for Rush the next stage in American business success: a sense of failure. The dream isn’t working, so goes the frustrated thought. For Rush, he said this stage for him was a sense of “moderate failure” as he spun rock and roll into the night as a DJ named “Jeff Christie.” Thus it was that in 1979 he left the Dream to be part of the sales force for a baseball team in his home state — the Kansas City Royals.

But wait! Along the way now there were business trips outside of the United States, giving Rush a chance to personally see with his always-observant eyes a close-up of various countries that clearly had a lower standard of living than America. His conservative mind was at work, observing, learning. What made America work?

Now a known commodity in Kansas City media circles, he took the next step in building a business — reenergizing his dream, taking a deep breath, and in his case going back to radio, this time in Kansas City. In doing so he said goodbye to his “Jeff Christie” pseudonym. Now, at last and again, forever more, he would be “Rush Limbaugh” — himself. And once more — he was fired.

This time around there was no more giving up on the dream. Weeks later he was offered a radio hosting job at KFBK in Sacramento, California. Now the dream — the building of what would become Rush’s very own small business — finally kicked in. It was October 1984. Rush had by now spent hundreds of hours on the air. He had been fired more than once. To the casual eye — not to mention, on occasion, his own, Rush had failed.

But, in fact, Rush had not failed. What he was doing all those years was doing exactly what a small business builder and owner must do — get first-hand experience. Learn the business you are building. Learn it from the ground up. Strike out with this, fail with that. But always, always adjust, learn — and keep going. Keep pursuing the dream.

Rush was now a success in radio. And it was noticed.

In July 1988, Rush left Sacramento with an invitation to host his show in the biggest radio arena in America — New York City. The station was WABC. As I can attest, having my extended family scattered around eastern Long Island, you could go nowhere without hearing WABC, particularly in those summers at the beach. It was the radio station of the day in the vast New York audience. And Rush was there. Rush’s dream was now reality — and would become one of the biggest successful small-business dreams in America.

All of Rush’s fans know the rest of the story. Rush’s radio dream now took off like wildfire. He literally invented serious talk radio, saved the vanishing beacon of AM radio, and was a founding father of what is now the vast web of “conservative media.”

By the time of his death, Rush’s radio show was carried by hundreds and hundreds of radio stations across America — and they stuck with him for the over 30 years of his national show. Rush Limbaugh was at the very center of America’s political debates. In creating his business and making his dream come spectacularly true, over time Rush would be awash in honors. He would be named to Forbes Magazine’s list of 50 Most Powerful Celebrities in the United States, receive the William F. Buckley Jr. Award for media excellence, be invited by President George H. W. Bush to spend the night at the White House in the historic Lincoln Bedroom, and receive the Conservative Political Action Conference — CPAC — “Defender of the Constitution Award.”

And, memorably at the end, Rush was awarded the very well-deserved Medal of Freedom by the president of the United States during President Trump’s State of the Union. With Rush and Kathryn watching from the First Family section of the House gallery, the president said this — clearly stunning Rush.

Almost every American family knows the pain when a loved one is diagnosed with a serious illness. Here tonight is a special man, someone beloved by millions of Americans who just received a Stage 4 advanced cancer diagnosis. This is not good news, but what is good news is that he is the greatest fighter and winner that you will ever meet. Rush Limbaugh: Thank you for your decades of tireless devotion to our country. Rush, in recognition of all that you have done for our Nation, the millions of people a day that you speak to and inspire, and all of the incredible work that you have done for charity, I am proud to announce tonight that you will be receiving our country’s highest civilian honor, the Presidential Medal of Freedom. I will now ask the First Lady of the United States to please stand and present you with the honor. Rush, Kathryn, congratulations!

In the end, Rush’s story is the story of every American out there who has an idea, a dream, for their own business. They will start out. They will have failures and setbacks. But they persist, and when things look bleak, they adjust, learn — and keep persisting.

This is exactly what the Rush Limbaugh Great American Business Award is all about. It is a recognition of the heart and soul of what makes America great — the ability to take a dream and make it a great business reality. And it’s presented in the name of Rush Limbaugh — who started from scratch and made his dream business real.

Our great nation is filled with extraordinary individuals who work tirelessly to create small businesses, produce products, and generate the economy.

Now, thanks to Kathryn, Rush’s last dream, embodied in his idea of a Great American Business Award, is coming to fruition. The idea is as simple as it is needed in an era of woke socialism. Rush’s award is all about cheering on and putting the spotlight on Americans who not only make their own dream business come true but in doing so really do make America great.

So again: here’s the link at Rush Limbaugh’s site where Kathryn Limbaugh has arranged for Americans to nominate the business they believe exemplifies a Great American Business. (And that can include your own business!)

And one last time: Thank you, Rush, for your example and inspiration.