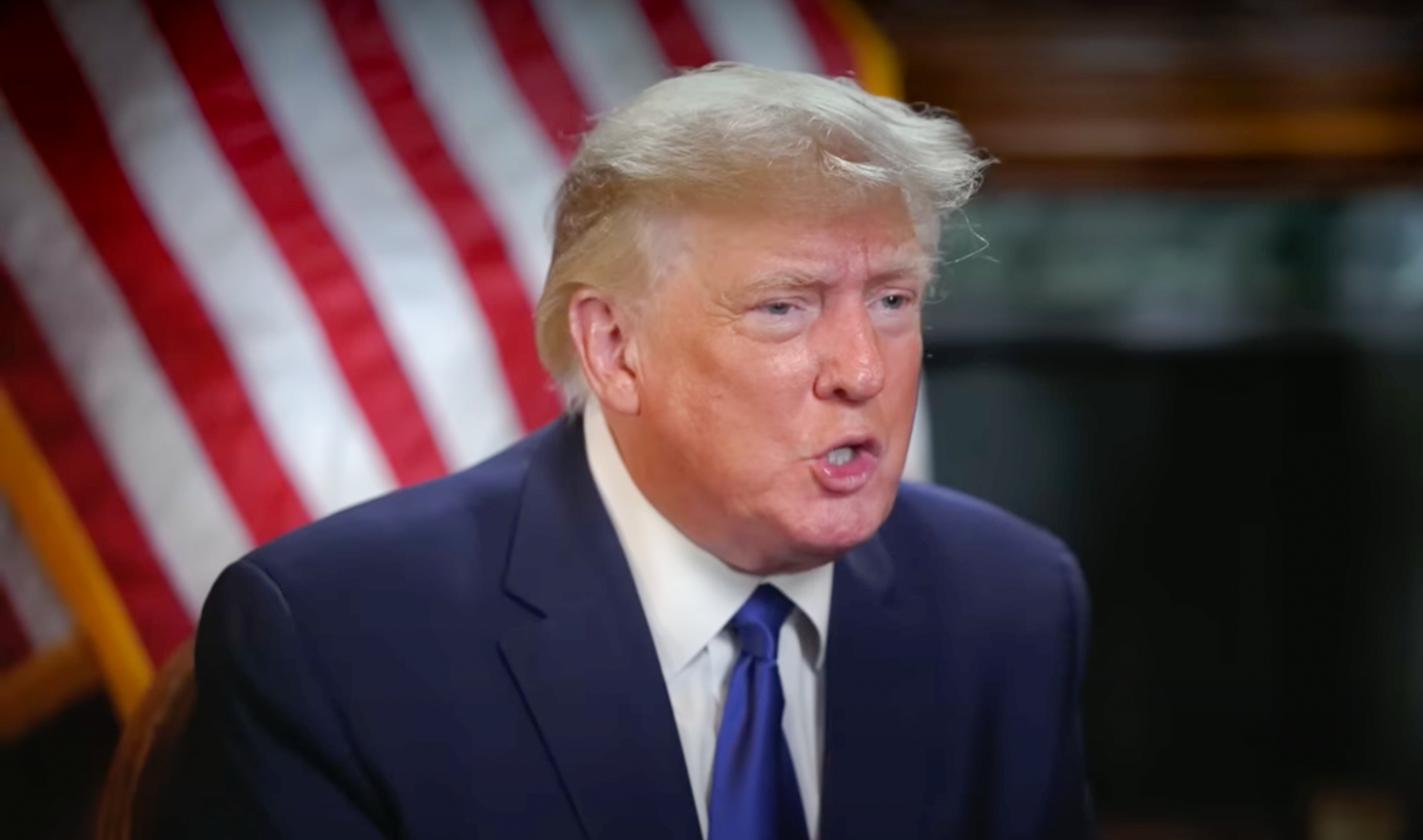 Without a doubt, former President Donald Trump has not so quietly been hinting that, yes indeed, he will in fact run in 2024 and win back his old job. In fact, in Ohio on Monday night, he said this: “I’m going to be making a very big announcement on Tuesday, Nov. 15 at Mar-a-Lago.”

As evidenced by his seriously enthusiastic supporters who attended his various fall rallies around the country in Florida or Pennsylvania or Wisconsin or Ohio or elsewhere, the former president stands a very serious chance of winning.

The return of Donald Trump to the presidency would mark him as the only president other than Grover Cleveland to serve two nonconsecutive terms in the White House (1884–1888 and 1892–1896). There is a new, admiring biography out on the man who served as both America’s 22nd and 24th president. A Man of Iron: The Turbulent Life and Improbable Presidency of Grover Cleveland is authored by Troy Senik, a former White House speechwriter for President George W. Bush as well as former House Speaker Newt Gingrich.

In the book, Senik uses the legendary social critic H.L. Mencken’s description of Cleveland in a fashion that decidedly describes Trump as well. Mencken argued that Cleveland was a president “whose fundamental character was solider and more admirable…. [He] came into office his own man and he went out without yielding any of that character for an instant.”

Senik also says this of Cleveland, a description that fits Trump as well:

Grover Cleveland was precisely the kind of self-made, scrupulously honest man that Americans often say they want as their president….

In over 230 years of the American presidency there’s never been another figure quite like him: thoroughly unimpressed by the pretensions of politics, unwilling to jettison his core beliefs even when expediency or prudence may have counseled otherwise, unmoved by hate or scorn as long as he believed he was keeping faith with his principles.

His was one of the most improbable journeys in American political history.

Interestingly, Trump has another similarity with Cleveland. Two years after Cleveland left the White House, the country run by his Republican successor, William Henry Harrison, was so bad that Cleveland’s Democratic Party had a sweeping success in the midterm elections of 1890. As this is written, Trump’s Republican Party is poised for a similar blowout in reaction to the policies of President Joe Biden.

Eerily, as with Trump and the surge of support for Republicans that is expected in the 2022 midterms, the issue driving the surge in support for Cleveland’s party was the economic policy of his successor, President William Henry Harrison. Specifically — yes, indeed, then as now — it was soaring inflation.

As the economic policies of his successor became more and more of an issue, inflicting increasing economic pain on average Americans, Cleveland wrote a former aide in a sentiment that could just as easily have come from Trump today: “I feel badly and sad to see the result of so much hard labor undone…. And yet I sometimes think that God has ordered it all for the enlightenment and awakening of our people.”

And an enlightenment and awakening were exactly what happened in those midterm elections that followed two years after Cleveland was forced to leave the White House. As biographer Senik observes, “the results in the House were a bloodbath.”

The Harrison Republican Congress went from 179 seats to a mere 86. Senik notes that the midterm election results from that 1890 midterm election remain to this day “the third largest loss any party has suffered in the lower chamber.”

One can only believe that if Tuesday’s projected GOP wins take place, Trump will see them, understandably and rightly, as vindication. The pro-Biden forces — ranging from far-left progressives to his embittered “Republican” enemies in places like the Lincoln Project and the Republican Accountability Project — got their way in 2020. Joe Biden has been in the White House and Democrats have had an iron-fisted control of Congress.

And exactly as Trump predicted, disaster has followed. Gas prices and the cost of everyday groceries have soared, thanks to Biden’s massive spending policies. The border is open, with tens of thousands of illegals swarming it every day. Crime is out of control. And, in a blink, taking the measure of the doddering, confused, and weak American president, Russia’s Vladimir Putin has invaded Ukraine, mercilessly subjecting its citizens to a World War II–style epidemic of mass murder. Not to mention that China is eyeing the same fate for Taiwan. In addition, the Associated Press reported that North Korea has “issued a veiled threat Tuesday to use nuclear weapons to get the U.S. and South Korea to ‘pay the most horrible price in history’ for defending South Korea’s independence.

Those are just some of the reasons that the thousands who crowd into those Trump rallies around the country are there to cheer him on.

And, taken together, there is no mistake. Millions of Americans want the former president to run again, just as all those Americans of the late 19th century wanted Grover Cleveland to return to the White House. Interestingly, in a twist of fate, while he was president, Donald Trump proposed a “National Garden of American Heroes” that would include 17 presidents — including Grover Cleveland. Typically, in yet another way to degrade American history, Senik notes the plans for the garden were canceled by Joe Biden.

The simple fact is that Donald Trump, in just one year from 2015–2016, was elevated to the presidency out of his private-sector life because millions of Americans had had it with the elites who run the American establishment — in politics and elsewhere.

As the late Boston University professor emeritus Angelo Codevilla noted in his 2010 bestseller, The Ruling Class: How They Corrupted America and What We Can Do About It (excerpts of which first appeared here in the pages of The American Spectator), America has become divided between a “Ruling Class” whose “chief pretension is its intellectual superiority” and who thinks that most Americans — which Codevilla called the “Country Class” — “are unfit to run their own lives.” Moreover, most Americans have noticed that “the Ruling Class has lost every war it has fought, run up an unplayable national debt, and generally made life worse.” In amazing fashion, five years after that book appeared, it was New York billionaire Donald Trump who rode that Trump Tower escalator into history as the champion of “the Country Class.”

By chance, back in 2016 after Trump’s victory, Senik took to the pages of the City Journal to note that Trump’s “victory was a blow for non-elites.”

There was a reason that, on the night of his 2016 victory, Trump pledged that “the forgotten men and women of our country will be forgotten no longer.”

Now, as Americans have learned the hard way, turning to Joe Biden and his far-left ideology has caused disaster to ensue, a disaster that they are literally paying for every time they fill up the gas tank, buy groceries, or do virtually anything else.

Make no mistake. Former President Trump has been out there campaigning for Republicans — with great success. And, along the way, to thunderous applause from his rally audiences, he has said that he will “very, very, very probably do it again.” (READ MORE FROM JEFFREY LORD: What Will Happen to America If Trump Wins Again?)

So. Yes, this has caused the all-too-predictable head-shaking from GOP establishment elite types and others who are, simply put, terrified of a Trump return. As they should be.

Dick Morris, the longtime political strategist and bestselling author of The Return: Trump’s Big 2024 Comeback, gets to exactly the importance behind a Trump 2024 run. Morris writes: “The stakes of the next elections could not be higher. The Democrats won the election of 2020-sort of-and the disastrous consequences are already upon us.”

Like Grover Cleveland over a century ago, a vindicated former President Donald Trump is poised to begin the battle for a return to the White House and a second term.

And, by all signs, it appears that, also like Grover Cleveland, Trump will succeed.

Which is exactly why his enemies are so terrified.

And exactly why so many millions of Americans are cheering him on.

Jeffrey Lord
Follow Their Stories:
View More
Jeffrey Lord, a contributing editor to The American Spectator, is a former aide to Ronald Reagan and Jack Kemp. An author and former CNN commentator, he writes from Pennsylvania at jlpa1@aol.com. His new book, Swamp Wars: Donald Trump and The New American Populism vs. The Old Order, is now out from Bombardier Books.
Most Popular
1
The Current Crisis
Shocker: Americans Think Democrats Are ‘Strange’
by R. Emmett Tyrrell, Jr.