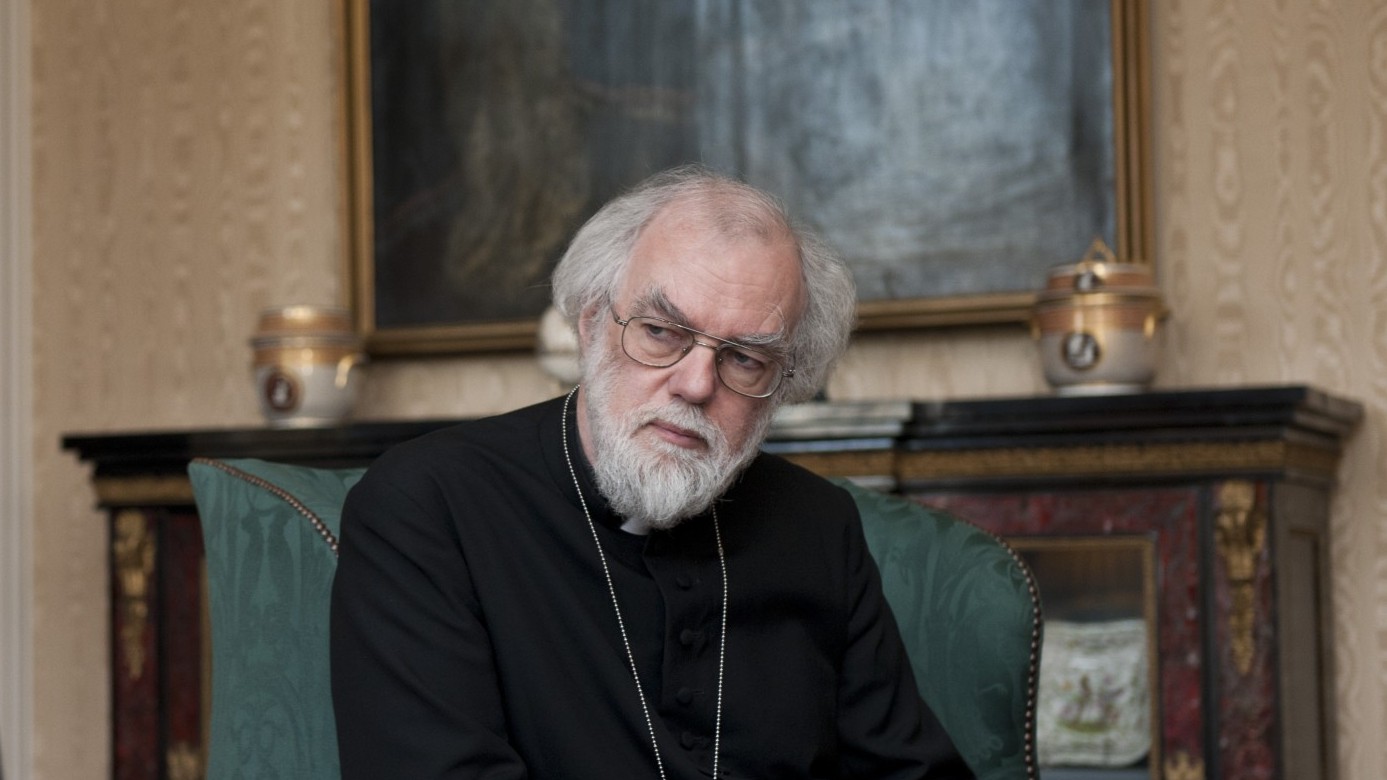 If you look up Rowan Williams on Wikipedia, you’ll find out that he’s actually Rowan Douglas Williams, Baron Williams of Oystermouth, PC (member of the British Privy Council), FBA (Fellow of the British Academy), FRSL (Fellow of the Royal Society of Literature), FLSW (Fellow of the Learned Society of Wales). He was Archbishop of Canterbury, i.e., head of the Anglican Communion, including the Episcopal Church in the United States, from 2002-2012. Before that, he was pretty much a standard issue lefty clergyman of the ‘68 generation. He supported unilateral nuclear disarmament in 1980s and after witnessing the 9/11 attacks in New York personally, wrote of Al-Qaeda that it had “serious moral goals” and that calling it evil was not useful.

After being named Archbishop of Canterbury, to be sure, Williams morphed, politician-like (which was not surprising, because he’d always been an obvious careerist), into more of a moderate, although on the Islam issue he stuck to his guns, as he supported the advance of sharia law in the U.K.

Williams is one of the reasons why, many years ago, I moonwalked away from the Anglican Communion, in which I had been baptized and in which, for many years, I was extremely active. But I haven’t seen his name in a while. So it was interesting to run across a July 28 article reporting that Williams is now singing the praises of Greta Thunberg. After “a Bible study on the Old Testament prophet Jeremiah,” Williams was asked a question about “modern examples of prophetic living,” wrote George Conger at Anglican.ink. In response, Williams said that “a very good example of a prophetic voice” along the lines of Jeremiah is Greta Thunberg. “God has raised up a prophet in Greta Thunberg in a way that no one could predict,” Williams said. “She has said things that no one else could have said. Thank God for her!”

According to tradition, Jeremiah was stoned to death. No comment.

Anyway, somehow it seemed perfectly natural that Williams should make such an over-the-top statement about Sweden’s own whiny little Cassandra — sorry, Jeremiah — at precisely the cultural moment when her star seems finally, thankfully to be beginning to fade. What made the news of his fatuous remarks even more meaningful to me, moreover, was that he made them at the Korsvei Festival in Seljord, Norway. (Korsvei means both “crossroads” and “Way of the Cross.”) Seljord, with a population of under 3,000 souls, is a one-horse burg high up in the mountains of Telemark an hour or so from where I live. It has one hotel, a surprisingly good Chinese restaurant, and a psychiatric hospital, and not much else. I’ve been in Seljord several times to visit a loved one while he was confined in the psychiatric hospital. Reading Williams’s remarks, I wish someone had thought to drop him off there, too.

Not that his nutty view of Greta makes him an outlier in the Anglican ranks. As Anglican.ink noted, Williams’s enthusiasm for Thunberg “is in line with the findings earlier this summer of the Civitas think tank which found ‘radical progressive activism’ had taken hold of the Church of England,” as exemplified by a “wholesale acceptance of the notions of ‘systemic racism,’ ‘unconscious biases,’ and an unfolding ‘climate emergency’ doctrine.” In the foreword to a Civitas report on the matter, quoted by Conger, Tom Harris observed that a “complete departure from the Church’s central purpose risks making it unrecognisable to the grassroots members who support it.”

Well, this “complete departure” was underway long before the libertarian-oriented Civitas noted it. Still, I can’t help but cheer Harris’s charge that Anglican prelates like Williams nowadays exhibit “a laziness in objecting to questionable claims and narratives, often to appease relentless and large-scale agitators.” Yes! Laziness! Bingo! This is a key insight. Williams and other church leaders of his ilk routinely posture, in their insufferable way, as deeply learned, thoughtful men who, combining profound biblical knowledge with worldly wisdom, strive to provide us clueless laymen with enlightened Christian guidance as to how to confront contemporary challenges.

Horsefeathers. Operators like Williams, notwithstanding his long white professorial (or prophet-like?) beard, are intellectual lazy, cynically career-obsessed cowards who are always following the path of least resistance. As the Civitas report put it, “institutions like the Church are increasingly taking on the mantras of ultra-progressivism, such as the notion of ‘systemic racism’ or alarmist calls for a ‘climate emergency.’” And they’re doing so for the least noble — and least Christian — of reasons. Of course Williams praises Thunberg, who’s the most overly praised person of our time. How many more truly admirable young people might Williams have known about, if only he’d made a little effort? If only, that is, he weren’t a phony celebrity eager to massage the egos of even bigger phony celebrities?

I can testify that right there in Seljord, at that psychiatric hospital up the hill from the main road, there are several nurses who labor day and night, underpaid and utterly unappreciated, whose lives provide estimable examples of selfless service that are fully deserving of citation by a preacher in a sermon (or a bishop in a Q&A). They make no headlines. They ask for none. But they’re the sort of people whom truly serious churchmen should know and care about — and exalt. But Rowan Williams, the very model of that modern breed of churchman who moves in illustrious circles and has long since learned how to play the game, seems to have utterly forgotten Matthew 20:16: “the last shall be first.”