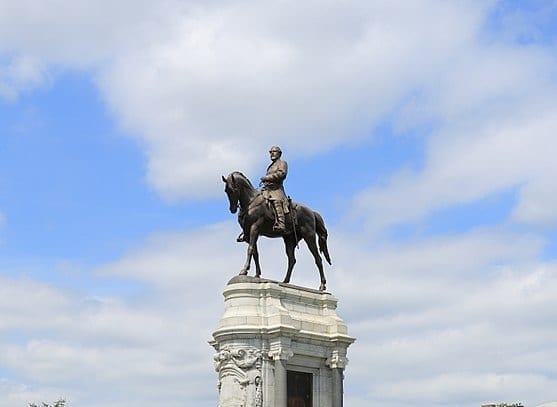 On Thursday, Virginia Gov. Ralph Northam announced that plans are underway to remove the large statue of Robert E. Lee from its prominent position on Richmond’s Monument Avenue, where it has stood for well over a century. The governor’s decision to store the statue follows protests earlier in the week, during which demonstrators congregated around the statue and defaced it with graffiti “BLM”s and assorted profanities. The statue’s defacement is but one in a sequence of such vandalisms that have swept the South in the last week and a half.

The statue was sculpted by the French artist Marius Jean Antonin Mercié and was displayed for the first time in 1890. Built both as a memorial to the South’s Lost Cause and as a monument to the man it represents, the statue’s unveiling was met with great excitement — 150,000 attended its unveiling. Amidst racial tensions in recent years, calls for its removal have increased among some Virginians but are by no means unanimous. By ordering the removal of the statue, Gov. Northam has effectively put an end to the present controversy.

Northam declared, “We put things on pedestals when we want people to look up,” and he encouraged the public to “think about the message this sends to people coming from around the world to visit the capital city.”

Robert E. Lee was a racist and a slaveholder. He joined with his state in rebelling from the Union and fought to defend the Confederacy and the institution of slavery. His leadership in the Army of Northern Virginia caused the Civil War to last as long as it did, costing thousands of American lives. After his death, Lee became a symbol behind which some racist Southerners could rally and revel in their glorious “Lost Cause.”

The person of Robert E. Lee is neither black nor white but is, like the Confederacy he defended, gray.

This latter detail is often forgotten in the heat of protest and civil strife, but it is nonetheless true. Lee graduated from the Military Academy and served the United States admirably in the Mexican–American War. He demonstrated courage and moderation throughout his personal and public life, a true Southern gentleman.

Despite his later portrayal as one of the great symbols of the Confederacy, Lee was never adamant for the Confederate cause. He did not think the secessionists’ actions were constitutional, nor did he think their cause was sufficiently justified. Lee turned down Abraham Lincoln’s offer of a position in the Union army and accepted one in the Confederacy not because he loved the United States less, but because he loved Virginia more. Lee’s civic virtue, his loyalty to his state, is perhaps a thing many today could learn from.

During the course of the war, Lee commanded the Army of Northern Virginia. His skill and tactics as a general continue to prove an inspiration for aspiring military officers. The fact that a much-outmatched Confederacy was able to wage such a lengthy war against a well-resourced Union could, in large part, be credited to Lee’s military expertise and strategic brilliance. A general with enough skill to fight off better-equipped forces is already uncommon, but for such a general to fight so nobly as to win the admiration of even his opponents is rare indeed.

When the Confederacy’s resources were exhausted, and it became certain that the victory was within the Union’s grasp, Lee did not fight “to the bitter end” as many in his loyal army would have been glad to do. He surrendered at Appomattox and secured lenient terms for the vanquished. After the war, Lee spoke nothing of the South’s “Lost Cause” but advised his fellow Confederates to lay down their weapons and be reconciled to the Union. Lee put away the memory of the Confederacy and accepted a position as president of Washington College, a role he retained until his death, educating the next generation of Virginians to become dutiful Americans.

So then, was Lee a racist slave-owner who rebelled against the United States to prolong slavery? Yes. Was Lee a valiant general, an exemplar of peaceful reconciliation, and a paragon of civic virtue? Yes. The person of Robert E. Lee is neither black nor white but is, like the Confederacy he defended, gray.