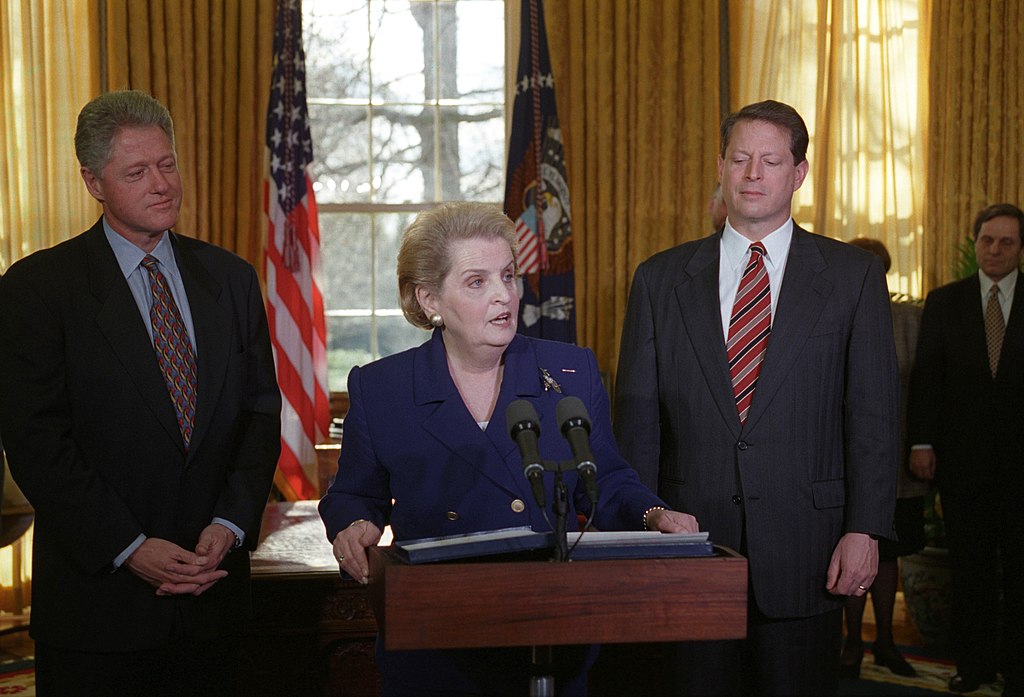 Madeleine Albright is being celebrated in death for many reasons, including being a pathbreaker as the first woman secretary of state and one of the triumphs of America’s immigration story. These positive parts of her story warrant praise from friends and foes alike.

However, she was a terrible foreign policy advocate, diplomat, and secretary of state. After leaving office she became a reliable “big name,” wheeled out whenever a reliable and venerable hawk was required to bless a new report or initiative promoting intervention and war. She could be trusted to treat every controversy as another opportunity for American military action.

Indeed, it is difficult to imagine someone who better represents the Blob, the U.S. foreign policy establishment, than Albright. Who else was so locked in the past — “my mindset is Munich,” she once declared, a unique, never repeated moment decades before. Who else had supped more fully of Washington’s mindset of arrogant righteousness and hubristic sanctimony than Albright? Who else was more ready to kill and send others off to kill (and die) than Albright?

She should never have been allowed near power. However, one comment of hers will always stand out. The U.S. sanctioned Saddam Hussein’s Iraq, which manifestly impoverished the country but not Hussein. It is impossible to know the full human toll, but it was high. That did not bother Albright, however. After all, she thought Blob members were anointed from on high to decide who got to live and die around the world.

Even worse was her 1997 question to Gen. Hugh Shelton, then-JSC chairman: “Hugh … what we really need in order to go in and take out Saddam is a precipitous event.…Could you have one of our U-2s fly low enough — and slow enough — so as to guarantee that Saddam could shoot it down?”

In 1996 she was asked about sanctions against Iraq, which had killed a half million babies. Some disputed the accuracy of that estimate, but not Albright. Her response: “I think this is a very hard choice, but the price — we think the price is worth it.” She did not define who “we” were. Presumably she was not speaking in the royal we, but rather meant Blob members, who had been selected and ordained for the foreign policy priesthood.

When Americans wonder why “they hate us,” it is because of such comments, and the policies which naturally followed. Albright later admitted of her statement: “I never should have made it. It was stupid.” It was enormously bad PR, which hurt America around the world and especially in the Mideast. However, it accurately reflected her philosophy.

The foundation of the latter was overweening hubris. In 1998 Secretary of State Albright claimed that “If we have to use force, it is because we are America: we are the indispensable nation. We stand tall and we see further than other countries into the future, and we see the danger here to all of us.”

It is a claim that even then was utter, bloviating nonsense. Today it should set off gales of laughter. The Cold War was messy enough. Blundering into the Korean War. Seemingly encouraging and then remaining aloof from the Hungarian Revolution. Refusing to talk with the People’s Republic of China for years. Backing a gaggle of ugly dictatorships around the world, some of which turned disastrously bad, such as Iran.

Getting involved in Vietnam. Fulfilling the classic definition of insanity by imposing, reinforcing, and then reinforcing again economic sanctions on Cuba, while expecting a different outcome. American diplomats, representing the quasi-empire that Washington seemed to represent, performed no better than real imperial viceroys from Britain, France, Portugal, and Spain. Washington demonstrated no special foresight or perspicacity when it made a multitude of awful decisions around the world.

Even worse is the record since then. Albright’s specialty, the Balkans, has turned out badly. The U.S.-European peace diktat for Bosnia is breaking down as ethnic Serbs threaten to declare independence. Kosovo remains a problematic state, buffeted politically at home, recognized by only about half the world’s nations, and barred from the United Nations. American diplomats had called members of the Kosovo Liberation Army “terrorists,” but the Clinton Administration intervened on their side. That delivered victory. Later on her watch ethnic Albanian Kosovars “cleansed” ethnic Serbs, Jews, Roma, and others after taking control.

Ironically, she showed contempt for America’s nominal allies. At the 1999 Rambouillet conference that was supposed to promote a negotiated settlement for Yugoslavia, Albright demanded that Yugoslavia accept treatment as a defeated and occupied territory, allowing NATO forces to move freely throughout the entire country.

This could only yield rejection — the U.S. would never accept such a foreign demand. However, the Kosovo Liberation Army, which was fighting for full independence, refused to sign. Newsweek reported that Albright was angry. An unnamed aide complained: “Here is the greatest nation on earth pleading with some nothingballs to do something entirely in their own interest — which is to say yes to an interim agreement — and they stiff us.” Another, “a close associate,” said: “She is so stung by what happened. She’s angry at everyone — the Serbs, the Albanians and NATO.” Obviously, Albright believed that the agreement was all about her, not those on both sides willing to put their lives on the line.

Then there was the war against Serbia. The U.S. bombed for 78 days, killing thousands of Serbian civilians. The allies’ other main impact was to trigger massive ethnic cleansing in Kosovo, as Belgrade retaliated by expelling ethnic Albanians. After her policy had multiplied the hardship of those it was supposed to help, Albright was forced to deny the obvious: “I think that it is just simply an upside-down argument to think that NATO or we have made this get worse.”

Taking a page from Yugoslav dictator Slobodan Milosevic, Albright simply flouted the truth: “To say that this has now backfired is just dead wrong.” Observed the late columnist Mike Kelly, “To hear a secretary of state mouth such patent nonsense is embarrassing, and frightening. Do these people have any idea what they are doing beyond bombing their way through another day? Did they really start a war without a strategy for coping with the most obvious consequences?”

In subsequent years promiscuous U.S. military intervention bore obvious ill fruit. Imposing authoritarian regimes, backing domestic oppression and occupation, interfering politically, and droning, bombing, invading, and garrisoning other nations had the same result that such practices would have if practiced against Americans. Foreigners hated Washington. Lacking aircraft carriers, armored divisions, air wings, and ICBMs, many in other lands turned to terrorism. Such attacks against civilians weren’t justified, but they were predictable.

For instance, until Iraq the most prolific suicide bombers were Sri Lankan Tamils fighting against the Sinhalese-dominated central government. Then came America’s invasion of Iraq: the invasion attracted militants who had never been engaged in terrorism, spawned al-Qaeda-in-Iraq, and multiplied suicide terrorism. Al-Qaeda morphed into the Islamic State, which wreaked a new round of havoc in Iraq, as well as Syria.

Most of Washington’s attempts at social engineering turned out badly. Some turned out disastrously. Washington spent two decades trying to bring democracy to Afghanistan. The U.S. spectacularly blew up Iraq, killing hundreds of thousands and displacing millions of civilians, while wrecking Iraqi society, driving out Christians, Yazidis, and other religious minorities, and empowering Iran. Washington also disastrously intervened in the Libyan and Yemeni civil wars.

Such counterproductive interventions were possible only because the U.S. has a globe-spanning military. Its members, like my father, mother, uncle, brother-in-law, and nephew, typically serve to defend the United States. Alas, Albright viewed them as gambit pawns for use by Blob members. In 1992, frustrated by the reluctance of then-Chairman of the Joint Chiefs of Staff Colin Powell to support promiscuous military intervention around the world, Albright asked him: “What’s the use of having this superb military you’re always talking about if we can’t use it?”

In his autobiography he related: “I thought I would have an aneurysm. American GIs were not toy soldiers to be moved around on some sort of global game board.” Albright later observed: “what I thought was that we had — we were in a kind of a mode of thinking that we were never going to be able to use our military effectively again.” The problem, however, was not effective use, but use for what? She appeared to view war as just another policy option, like a foreign aid grant or diplomatic demarche.

Even worse was her 1997 question to Gen. Hugh Shelton, another then-JSC chairman: “Hugh, I know I shouldn’t even be asking you this, but what we really need in order to go in and take out Saddam is a precipitous event — something that would make us look good in the eyes of the world. Could you have one of our U-2s fly low enough — and slow enough — so as to guarantee that Saddam could shoot it down?” He said yes, as soon as she qualified to fly the plane. Maybe she was not entirely serious. However, it is impossible to assume that she was not.

Celebrate Albright’s notable role as a symbol of women being fully integrated into America’s political and policy-making process. But not the policies that she advocated. After all, they left several nations in ruins and hundreds of thousands of people dead.