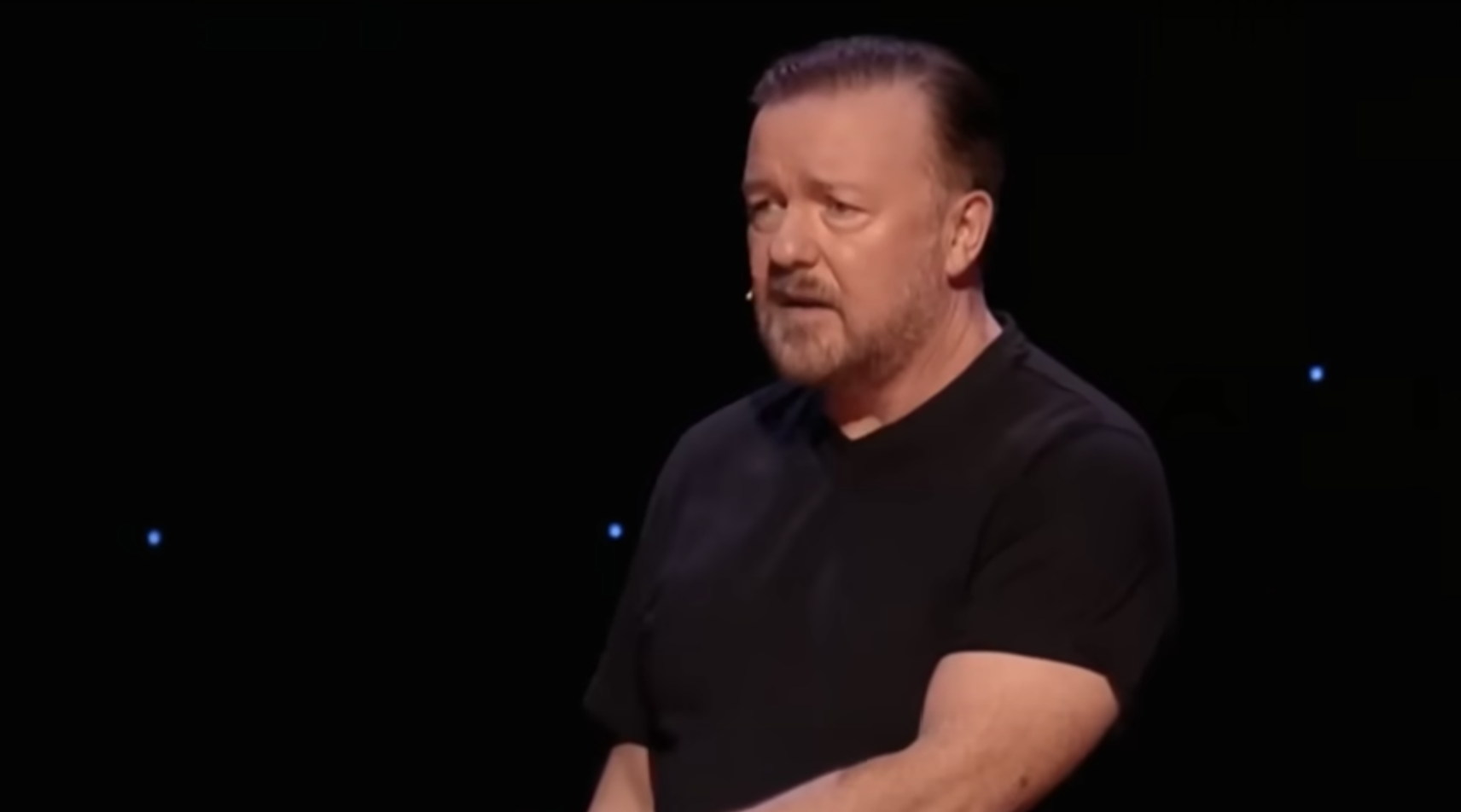 I’ve never watched either the U.K. or U.S. version of the sitcom The Office, so my immense respect for its creator, the English stand-up comic Ricky Gervais, is based almost entirely on the monologues he delivered at five Golden Globes ceremonies between 2010 and 2020. Acting consistently as anti-host, he mocked the program’s preposterous pretensions, roasted the celebrity-packed audience for its political correctness and hypocrisy, and rejected altogether the implicit premise of all such occasions — namely, that Hollywood is a mecca both of great art and high principle, and that movie stars, in addition to being America’s answer to royalty, are also quite often the voice of America’s conscience.

“We were going to do an in memoriam this year,” Gervais quipped, beer in hand, in his 2020 Globes monologue, “but when I saw the list of people that had died, it wasn’t diverse enough.” When the audience groaned at a Jeffrey Epstein gag, he twisted the knife: “Shut up, I know he’s your friend. But I don’t care.” He described Birdbox as “a movie where people survive by acting like they don’t see a thing. Sort of like working for Harvey Weinstein.” More groans, then this: “You did it! I didn’t! Shut the f**k up!” Then there was this choice bit about Apple (and with CEO Tim Cook in the audience, no less): the computer giant, Gervais noted, had “roared into the TV game with The Morning Show, a superb drama about the importance of dignity and doing the right thing — made by a company that runs sweatshops in China.” Yet more groans. Gervais doubled down:

Well, you say you’re woke, but the companies that you work for? I mean, unbelievable! Apple! Amazon! Disney! If ISIS started a streaming service, you’d call your agent, wouldn’t you? So if you do win an award tonight, don’t use it as a platform to make a political speech. You’re in no position to lecture the public about anything. You know nothing about the real world. Most of you spent less time in school than Greta Thunberg.

Terrific stuff. And post-Globes, to his credit, Gervais has stayed the course. He’s one of a very small number of top-level entertainers who refuse to toe the woke line — and who are big enough to weather cancel culture. Now, in the wake of Dave Chappelle’s Netflix stand-up special The Closer — which outraged the woke crowd while giving sane viewers reason to hope for eventual liberation from the crazy new road rules — comes another burst of sanity, also courtesy of Netflix, and also in the form of a stand-up special: Gervais’s SuperNature.

Here, as on the Globes, Gervais establishes from the outset that he’s not about to bow to PC. He refers to “old-fashioned women — the ones with wombs.” Apropos of Boris Johnson’s widely condemned remark that a woman in a burka looks like a letterbox, Gervais says: “It’s not up to Boris what a Muslim woman wears on her face — it’s up to her husband.” Amid the drollery, moreover, Gervais serves up observations that aren’t meant to be funny and that won’t be news to the non-woke, but that are nonetheless refreshing to hear a mainstream figure utter out loud — for example, that “people nowadays want you to think that words are actual violence” and that “nothing is considered mental” anymore, up to and including “identify[ing] as a pram.”

When it comes to transgenderism, to be sure, Gervais, like Chappelle, feels compelled to soften the blow. Chappelle closed The Closer with a long personal anecdote intended to prove his pro-trans sympathies; Gervais, for his part, assures us at the end of SuperNature that if he tells trans jokes, it’s because he wants to be inclusive — no group of people should be off-limits: “I support all human rights, and trans rights are human rights. Live your best life. Use your preferred pronouns. Be the gender that you feel you are.” Alas, just as Chappelle’s concluding anecdote didn’t prevent trans lunatics from calling for his head — and one wack job from tackling him onstage at the Hollywood Bowl earlier this month — Gervais’s curtain speech hasn’t kept him from being savaged for his trans material.

Take GLAAD, the organization of queer media police (which, by the way, no longer uses its original full name, the Gay and Lesbian Alliance Against Defamation, since these days it’s all transgenderism, all the time). Issuing the predictable complaint that SuperNature is “full of graphic, dangerous, anti-trans rants masquerading as jokes,” GLAAD maintained that Netflix, by airing the special, had violated its own policy against content “designed to incite hate or violence.” (GLAAD neglected to mention that Gervais’ witticisms will doubtless also cause plenty of suicides.) Denouncing Gervais’s gibe about the “old-fashioned women” with wombs, the British website PinkNews instructed readers that “[t]here are many reasons why a cis woman might not have a womb. About one in 5,000 women are [sic] born without a uterus because of a condition known as Mayer-Rokitansky-Küster-Hauser[;] others have them removed for various medical reasons.” And transgender podcaster Ian Thomas Malone, while ridiculing the idea that there’s such a thing as cancel culture (and referring to sex-change surgery, incidentally, as “mainstream medical care for trans children”), accused Gervais of “recycl[ing] tired grievance nonsense” and said SuperNature was “a Trump rally disguised as a comedy special.”

The criticism didn’t just come from the professional trans cops. At least two pieces in Variety clobbered Gervais as “anti-trans”: William Earl chided him for, among other things, denying that a woman can have a penis, while Daniel D’Addario deplored the purported insensitivity of Gervais’s suggestion that non-op trans women “lose the cock.” (“It’d be easy to call this [joke] shocking,” wrote D’Addario. No, what should be regarded as shocking is that in the year 2022, mainstream publications embrace as an unquestioned orthodoxy the proposition that a woman can have male genitalia.) Finally, at the Decider website, one Sean L. McCarthy, who advertises himself as “work[ing] the comedy beat,” plainly felt that in order to demolish SuperNature all he had to do was show that much of Gervais’ humor is based on odious stereotypes (such as the notion that many straight men are uneasy about male homosexuality but turned on by lesbians). Out of curiosity, I looked up McCarthy’s take on Hannah Gadsby, the Tasmanian lesbian who’s the woke world’s favorite comic because of her politically motivated refusal to do anything onstage that might, by conventional standards, be recognizable as comedy. Surprise! McCarthy loves her.

In the end, what’s most striking about the reception of SuperNature is that Gervais, in his special, actually jests at least as much about pro-lifers and Christians — and religion generally — as he does about transgenderism or any other left-wing sacred cows. GLAAD excoriated his riff on AIDS as anti-gay; in fact, the whole purpose of that portion of his act is to scoff at religious people who describe AIDS as divine punishment for homosexuality. Indeed, as Gervais explains in the show’s opening moments, the reason he titled it SuperNature is that he doesn’t believe in the supernatural and thinks that nature, all by itself, is super enough. But have Christians protested the show in any great numbers or with any degree of fervor? If so, I haven’t seen a single mention of it.