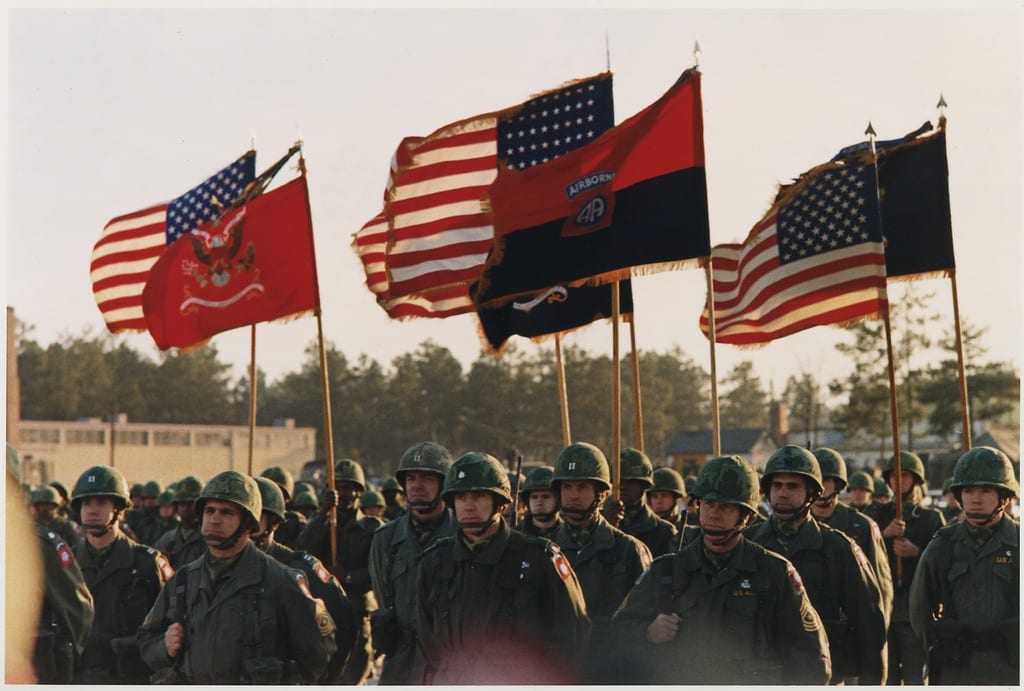 Alfred Lord Tennyson was right: We are not now that strength which in old days moved earth and heaven. Sadly, we do not have the consolation of being able to claim that we are “one equal temper of heroic hearts,” either.

The Marine Corps, long the most countercultural branch of the U.S. military, just banned even the informal use of the battle flag it used to wink at. Widespread emotional and sometimes felonious response to recent actions of a rogue police officer makes it perilous to tag preface that observation with an introductory clause like “For good or for ill,” so revisionist history proceeds not just unchecked, but actually endorsed (there’s no other way to explain awarding a Pulitzer Prize to the 1619 Project).

Oddly for a man who wants to throw most Confederates under the proverbial bus, Petraeus also says that he does not propose to “erase” Robert E. Lee’s large role in the history of West Point.

Riding the same whirlwind, the Army now considers renaming Fort Bragg and nine other installations named for Confederate commanders. Conversations of this kind only ever seem to have one outcome, but publications like the Atlantic are taking no chances, so editors there posted an op-ed by retired Gen. David Petraeus to explain why Confederate history now weighs heavily even on decorated soldiers like him.

Mindful (maybe) of a similar essay by Gen. Stanley McChrystal in the same publication just two years ago, Petraeus took the high road. Rather than simp as McChrystal had about how it took decades of soul-searching before he could throw out a portrait of Robert E. Lee that had been a gift to him from his wife, Petraeus looked at the Confederate record on slavery. He then concluded (reasonably), that “We do not live in a country to which Braxton Bragg, Henry L. Benning, or Robert E. Lee can serve as an inspiration.” Perhaps justice delayed is no longer justice denied.

But people with whom we do not agree can still be remembered as cautionary examples, at least until the book-burning phase of revolution grows popular. Oddly for a man who wants to throw most Confederates under the proverbial bus, Petraeus also says that he does not propose to “erase” Robert E. Lee’s large role in the history of West Point. Unlike President Trump, Petraeus doesn’t seem to realize that progressives don’t do nuance, and his logic won’t spare “Marse Robert.”

Petraeus also banks too much on education: Your average Civil War re-enactor understands more of American history than community organizers, congressional staffers, or members of the New York Times editorial board, all of whom exercise disproportionate influence over federal policy.

Would it be impolite to mention that every damn one of the Confederate commanders whom Petraeus wants to toss in the dustbin of history was a Democrat? And is it also out of line to note that a memorial to the 54th Massachusetts Regiment (an all-black unit that fought bravely for the Union in the Civil War) was recently vandalized by rioters claiming solidarity with Black Lives Matter? Neither public education nor progressive ideology recognizes irony.

Changing names that have been used for generations presents the military with a branding problem, as even the Obama administration once admitted. Retired Gen. Dan McNeill, a former Fort Bragg commander, reminded WRAL News (Raleigh, North Carolina) on June 9 that the base is known around the world — not for its Confederate roots, but as “a symbol of strength and freedom.” People who can’t find Fayetteville on a map have nevertheless heard of Fort Bragg, home to both the 82nd Airborne Division and Special Operations Command.

In his essay, Petraeus observes that with the exception of Robert E. Lee, “most of the Confederate generals for whom our bases were named were undistinguished, if not incompetent, battlefield commanders.”

That’s true but irrelevant. If army base names emphasized competence rather than political patronage, Fort Bragg might have been called Fort James Longstreet or Fort Stand Watie, because both of those men were better Confederate generals. Yet what’s the point of wishcasting? We might want to think that merit matters more for memorial purposes than it once did, but we’d be wrong. The U.S. Navy has an Arleigh Burke–class destroyer (DDG-56) named for John McCain (not just the father-and-son admirals, as you might expect, but also the late Arizona senator, whom the Navy compassionately added as a namesake for the ship in 2018).

Confederate motivation was misguided and un-Christian. Any perusal of primary documents like the Confederate States Constitution confirms that yet there’s something good to say for being magnanimous in victory. Too many generals seem to have forgotten important lessons taught by heroes like Ulysses S. Grant and Joshua Lawrence Chamberlain.

In his book April 1865: The Month That Saved America, historian Jay Winik writes evocatively about the surrender of Lee’s Army of Northern Virginia to Grant’s Army of the Potomac at Appomattox Court House. Grant was generous in victory. He ordered federal bands and artillerymen to stop their raucous celebrations because, he said, “The Confederates were now our prisoners, and we did not want to exult over their downfall.”

At the formal surrender ceremony, Joshua L. Chamberlain was moved by what he called the “proud humiliation” of the men he’d help to defeat. Winik paints the scene and quotes Chamberlain:

Without having planned it — and without any official sanction — Chamberlain suddenly gave the order for Union soldiers to “carry arms” as a sign of their deepest mark of military respect. A bugle call instantly rang out. All along the road, Union soldiers raised their muskets to their shoulders, the salute of honor. “At the sound of the machine-like snap of arms,” Chamberlain recalled, “[Confederate General Joseph] Gordon started … then wheeled his horse, facing me, touching him gently with the spur so that the animal slightly reared, and, as he wheeled, horse and rider made one motion, the horse’s head swung down with a graceful bow, and General Gordon dropped his sword-point to his toe in salutation.” And as he did, the veterans in blue gave a soldierly shout to those “vanquished heroes” — a “token of respect from Americans to Americans.”

Patrick O’Hannigan is a writer in North Carolina.