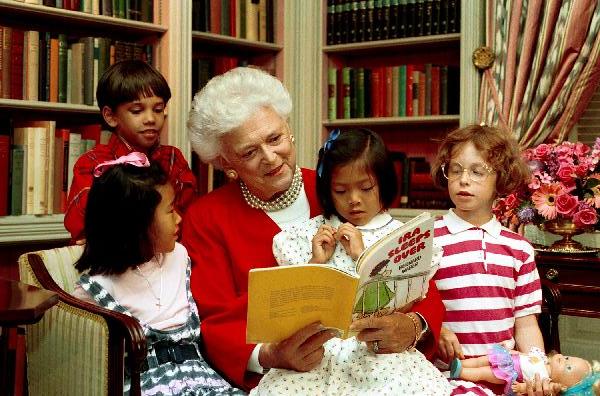 Barbara Bush will be remembered as simple and unpretentious, especially following Nancy Reagan as first lady. Mrs. Reagan was known for fancy clothes and fancy friends, as part of the Hollywood set. Mrs. Bush was known for being more homespun, more Texas, even though she was raised a blueblood with much fancier trappings than Nancy. She followed Nancy in many ways, including in death, as Nancy passed away in March 2016.

Still, Barbara humbly accepted the role of the older-looking and less-glamorous first lady. Her husband jokingly called her “The Silver Fox,” and she graciously smiled and accepted the ribbing. She was more Mamie Eisenhower than Jackie Kennedy.

We’ll hear all sorts of things about Mrs. Bush in the next few days. But there’s one story about her that I learned when researching and writing a biography of her oldest son — a story I think is well worth remembering. It’s probably the most human thing about this very human lady.

It was the fall of 1953. George W. Bush was seven years old. His parents’ green Oldsmobile pulled in front of Sam Houston Elementary School in Midland, Texas. George happened to be strolling down an outdoor corridor with his friend, carrying a Victrola record player to the principal’s office. The moment that he saw the car, he set down the phonograph and sprinted ahead to his teacher. “My mom, dad, and sister are home,” he shouted. “Can I go see them?”

The little sister was Robin. To this day, George W. Bush swears he saw her. He says he caught her small head barely rising above the backseat. His parents had been in New York, where they were tending to George’s little sister. He knew Robin was sick, but had no idea howsick. The three-year-old was dying from leukemia.

George’s parents returned with an empty back seat and emptier news. “I run over to the car,” said Bush almost half a century later, “and there’s no Robin.” She was not coming home. “I was sad, and stunned. I knew Robin had been sick, but death was hard for me to imagine. Minutes before, I had had a little sister, and now, suddenly, I did not.” Bush says that those minutes remain the “starkest memory” of his childhood. When asked about the incident in an interview, his eyes welled with tears. He stammered his response.

Pauline Robinson “Robin” Bush started to show symptoms in February 1953, just after the birth of her baby brother Jeb. She simply wanted to lie down all day. Mysterious bruises began appearing on her body. The Bushes took her to Dr. Dorothy Wyvell, renowned in West Texas pediatrics. Wyvell was shocked by the test results. She told the Bushes that the child’s white blood cell count was the highest she had ever seen, and the cancer was already too advanced. She recommended they simply take Robin home and allow nature to take its course, sparing all of them the agony of futile treatments.

The Bushes couldn’t do that. George H.W. Bush had an uncle in New York who was president of Memorial Sloan-Kettering cancer center. They agreed to do everything they could in the hope of some breakthrough.

As for Barbara Bush, she was constantly at Robin’s side during the hospital stay. Her husband shuttled between New York and Midland. Each morning of Robin’s New York stay, her father dropped by the family’s Midland church at 6:30 a.m. to hold his own private prayer vigil. Only the custodian was there, and he let him in. One morning, Pastor Matthew Lynn joined him. They never talked; they just prayed.

Barbara was the strong one throughout the affair. When Robin received blood transfusions at the cancer center, her mother held her hand. Her father had to leave the room.

Robin never had a chance. Eventually, the medicine that labored to try to control the evil metastasizing in her frail frame quickly caused its own set of problems, and George H. W. was summoned from Texas immediately. He flew all night to get there, but by the time he arrived Robin had slipped into a coma. She died peacefully.

“One minute she was there, and the next she was gone,” remembered her mother. “I truly felt her soul go out of that beautiful little body. For one last time I combed her hair, and we held our precious little girl. I never felt the presence of God more strongly than at that moment.”

It all happened so fast. By October, Robin was dead, only weeks from her fourth birthday.

“We awakened night after night in great physical pain — it hurt that much,” Barbara recalled.

Alas, it is said that this was the reason Barbara Bush turned prematurely gray. There was a story — quite a story — behind that trademark hair of Barbara Bush. The story’s name was Robin.

May Barbara Bush rest in peace, reunited at long last with that little girl.