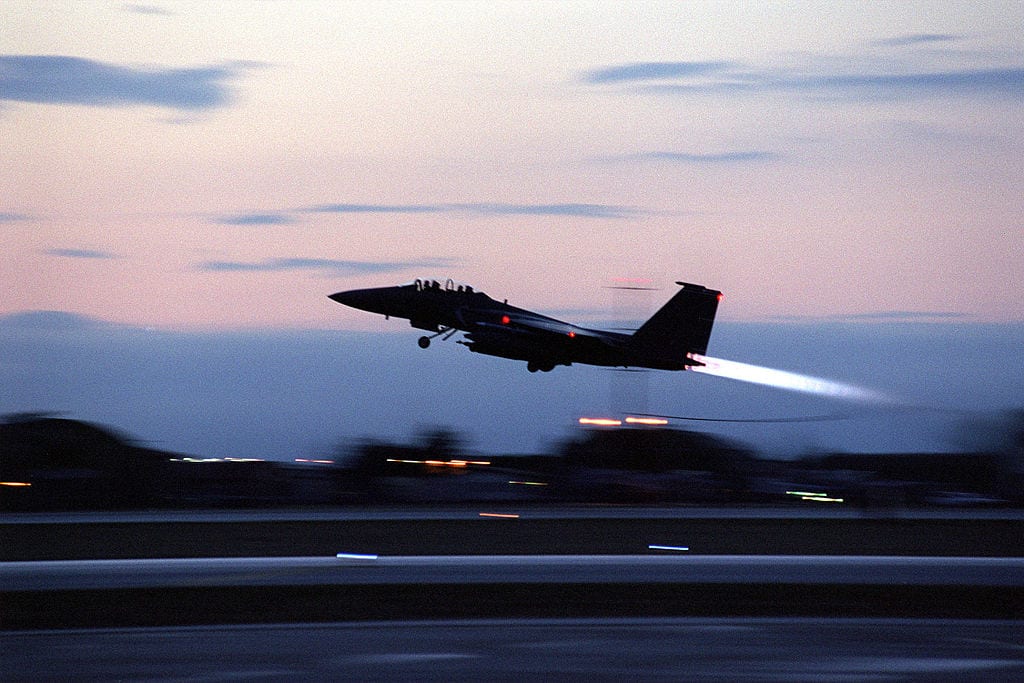 It seems an easy enough case to make.

Patrick Shanahan, acting secretary of defense, came to the Pentagon from Boeing, where he worked on commercial planes, military helicopters and missile defense systems. President Trump is said to favor him in part because he understands defense procurement.

Boeing sells F-15EX fighter jets, but the Pentagon hasn’t bought any since 2001. In the 2020 proposed budget President Trump submitted last month, there is a request for $1 billion to buy eight F-15EXs.

Chatterers are claiming that Shanahan talked up his former employer and trashed Lockheed, which sells the F-35. These same chatterers stoked unfounded fears that renewed interest in the F-15EX will mean fewer F-35s purchased just when the company had begun to iron out its persistent problems. The Air Force values diversity in its fleet and wants to procure both of these fighter jets.

They’ve complained to Citizens for Responsibility and Ethics in Washington, a venerable left-leaning watchdog group, which complained to the Pentagon’s inspector general who has opened an investigation into whether Shanahan unduly put his thumb on the scales in favor of his former employer.

Shanahan said through a spokesman he has “at all times remained committed to complying with his Ethics Agreement,” which called for him to divest his financial interests in Boeing, establish screening mechanisms in his calendar to limit exposure to related matters and recuse himself from all matters concerning his former employer.

Speculation such a complaint would emerge began in January when a Politico story accused him of “boosting his former employer” and “trashing competitors such as Lockheed Martin” in “private remarks during his 18 months at the Pentagon.” That same story became the basis for the CREW complaint. Coincidence?

One could make that case, but one also could make the case the Air Force should be purchasing F-15EXs, even if meant purchasing fewer F-35s. But no one, including Shanahan, is making that case. The Air Force has been clear it wants to add 80 F-15EXs over the next few years, but not at the expense of the F-35. The Air Force fleet is aging and depleted — its average plane is 28 years old, and we have the fewest planes of any time since World War I — and both the F-35 and the F-15 have roles in addressing these shortcomings.

But it must be recalled that the F-35 is a study in Pentagon Acquisition Gone Wild. The program began in 1996 as an effort to save money by building one fighter jet for all the services. It would have 80 percent of its parts in common and could be shared with allies to ensure there were parts and partners all over the world.

But problems began right away. The Air Force needed a stealthy plane without weapons bays. The Marines wanted short-takeoff-and-landing features and a bulkier, heavier body that could carry bombs. The Navy needed a plane that could land on ships.

On top of that, the Pentagon attempted to produce planes before it had completed ground and flight testing — despite its engines, flight control systems, software and autonomic logistic systems being quite early in their development. Production went forward. Problems were identified. Fixes were made to planes in production but had to be retrofitted onto planes already in use — a mistake the Government Accountability Office priced at $1.7 billion.

By 2011, the Marine general in charge of the program had been removed, critical problems had been identified in the wings of the aircraft and the Air Force and Marines had agreed to accept less — smaller fuel tanks and thus reduced range on the Air Force plane and a longer takeoff run for the Marines plane.

All in all, by 2012, the Pentagon had spent $320 billion on F-35s — making it the most expensive defense acquisition in U.S. history and 43 percent above budget. Sold as a cost-cutting way to stay at the top, it lagged technologically, and its operating costs were 79 percent higher than the planes it replaced.

Meanwhile, the F-15EX has been redesigned from the ground up. It delivers hypersonic weapons and carries three times the payload of an F-35. It has a 20,000-hour airframe and the latest in improved radars, sensors, high-tech cockpit and data links that, among other things, enable it to resist and degrade efforts to jam or spoof onboard systems, as well as the most recent electronic warfare systems and weapons.

Changing out F-15s with newer model F-15s would make more sense than imposing F-35s on crews, repair operations and hangars not designed for them. It is immediately available — already in full production — as well as affordable and sustainable with no additional retraining required.

So yes, there is a Boeing man in charge for now at the Pentagon, and yes, Boeing has benefited from a recent procurement decision. But that doesn’t mean he put his thumb on the scale, and it certainly doesn’t mean purchasing the new F-15 is a bad idea. In fact, it seems the opposite.