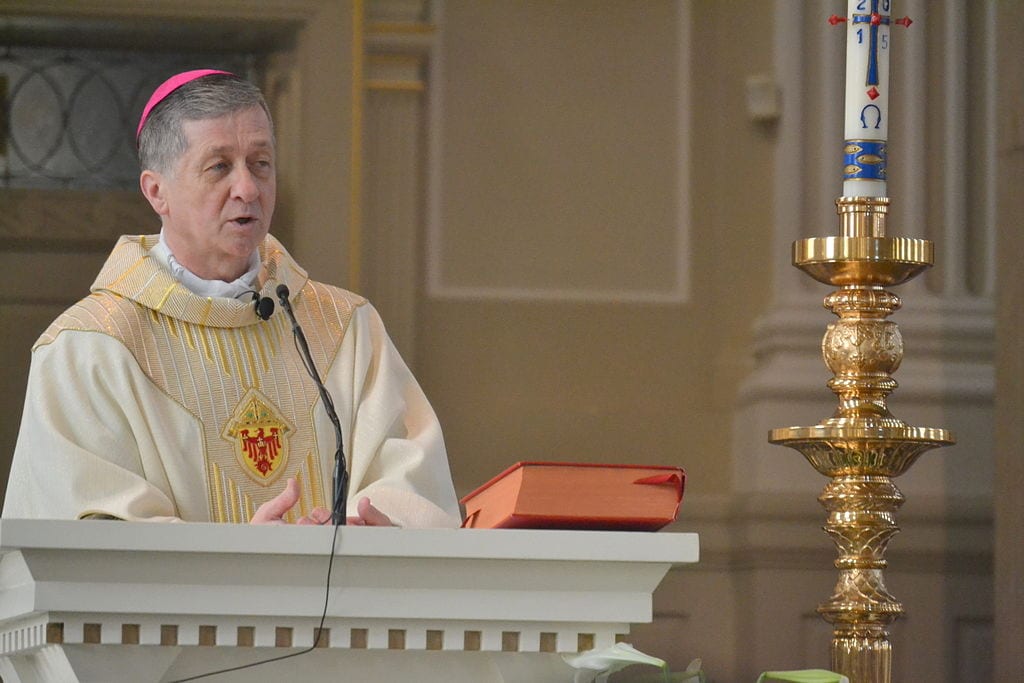 As I walked outside the hotel in Baltimore where the bishops gathered last week for their annual Fall conference, I noticed a couple of bishops taking a smoke break. One was puffing a cigar, the other a cigarette. I overheard one say to the other: “What do you think of the conference so far?” The other responded: “Long and tiresome.”

Inside, the opinion wasn’t much better. As I sat at the café near the lobby, I overheard an adviser to one of the bishops fume: “There is nothing to show for this conference!” He was furious that even the toothless motion at the end of the conference — which merely asked Pope Francis to release McCarrick-related documents as soon as possible — failed. Cardinal Donald Wuerl, who stands to lose the most in credibility from the release of those documents, had dispatched proxies to kill the motion, such as Bishop George Murry of Ohio.

Wuerl served as a puppetmaster at the conference, yanking on this or that string attached to the backs of bishops who owe their elevations to his influence on the Congregation for Bishops. After the conference concluded, I saw Cardinal Daniel DiNardo, the ostensible head of the United States Conference of Catholic Bishops (USCCB), sitting alone on a couch in the lobby waiting for his ride to the airport. I asked him why Wuerl and Cardinal Blasé Cupich, both of whom sit on the Congregation for Bishops, the body which officially ordered DiNardo to block any USCCB votes on the abuse scandal, left him in the dark concerning the Vatican’s intentions. Unconvincingly, he claimed they hadn’t. He said they didn’t learn about it until he informed them of the Vatican’s directive on the eve of the conference. How, then, did Cupich have a statement prepared in mere moments after DiNardo reported the Vatican’s directive to the bishops? DiNardo turned dyspeptic at that question. “I am not giving interviews,” he suddenly said and petulantly mused on my motives.

DiNardo’s claim that none of the bishops knew the pope would put the kibosh on any abuse-related votes looks even less plausible in light of the news reported by the Catholic News Agency that Wuerl and Cupich had hatched a plan weeks ago to ensure that future investigations of depraved bishops remain firmly in the hands of other bishops. It is obvious that Wuerl and Cupich have a direct line to Pope Francis and his inner circle and knew exactly what would transpire at the conference. Cupich’s body language was telling; he strode the conference as the Big Man on Campus, with a smile as shiny as his cuff links. He is feeling his oats. But one source connected to prelates not in the Wuerl-Cupich loop said he is hearing from “livid” bishops who feel increasingly “alienated” by Francis. “They don’t know who to believe anymore.” he said. “This is going to catch up with Wuerl and Cupich.”

It appears that the influence of American cardinals under Pope Francis is in direct proportion to their guilt. The guiltiest call the shots while the least guilty dither in the dark. At times the USCCB conference in Baltimore resembled an Old-Timers’ Day for derelict bishops. Even Cardinal Roger Mahony, whose shuffling of pedophiles and pederasts has cost Catholics hundreds of millions of dollars in settlements, got his turn at the microphone. Roger the Dodger is back in business under Francis (the pope is dispatching him to ceremonial events). Mahony had gushed at the beginning of this pontificate, “So long Papal ermine, and fancy lace!”

But plenty of lace is still in evidence at the parties of the Gay Mafia, whose members feel emboldened by this LGBT-friendly pontificate. I continue to receive credible leads about double-living bishops and cardinals from concerned Catholics. One East Coast bishop has been carrying on with one of his former vocations directors; another is said to be a date rapist; and so on.

I wrote a week or so ago about Fr. Patrick Ryan, who left his parish in the New Jersey Diocese of Paterson for “health reasons.” I was told by a well-placed source that the real reason is that Ryan has been embezzling money from the second collection at his parish and using the dough to sustain his gay lifestyle. When I saw Paterson Bishop Arthur Serratelli in the lobby of the Baltimore Marriott, I asked him about Fr. Ryan. Is he under state investigation for embezzlement? “I won’t answer that question,” he said before scuttling away.

Such scandals are legion in the Church. Yet Cardinal William Levada maintained to me with a straight face as he waited for a cab that it is only Archbishop Viganò’s “opinion” that a homosexual network of priests and bishops exists in the Church. “I don’t know that it exists,” he said. I pointed out to him that a gay pederast was his associate pastor at St. Mary’s Cathedral during his tenure as archbishop of San Francisco. That got his attention. “After Dallas, I told him that he had to leave,” he said weakly, referring to the charter adopted by the bishops in 2002.

Levada’s denialism is typical of most of the bishops, though not all. I met outside the hotel Bishop Joseph Strickland of Tyler, Texas. He acknowledged the Gay Mafia crisis in the Church. “Viganò has evidence for what he is saying,” he said simply.