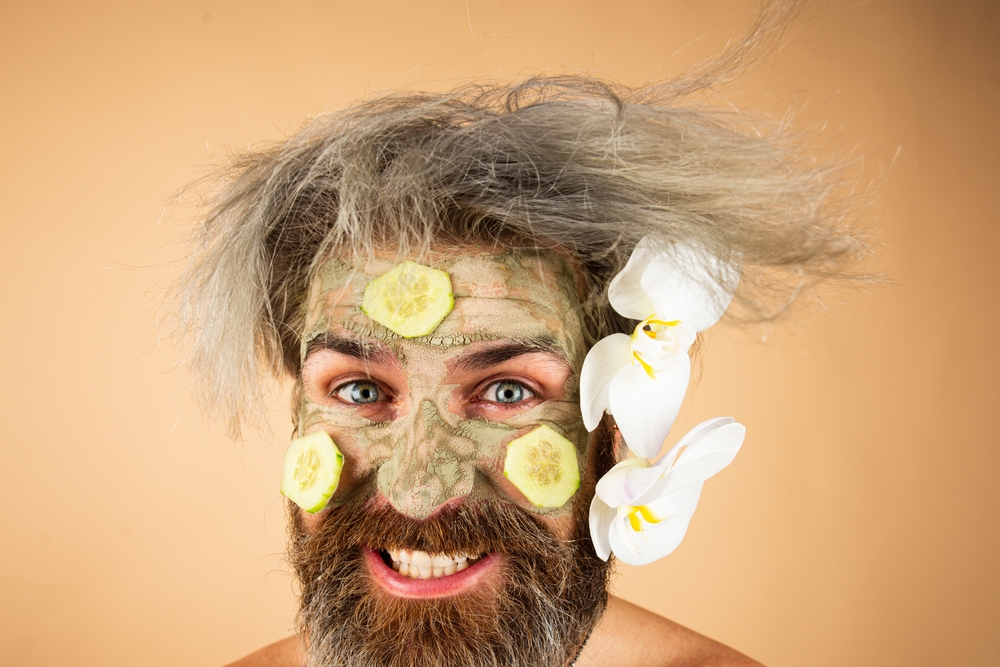 Up until now, one of the advantages of being a man is that your toiletry bag could fit in a pack of cigarettes. These days you need a suitcase to carry it all. In one of my attempts to be accepted by the prevailing modernity, I have attempted to test them all and observe the effects they have on the battered body of a man in the midst of a midlife crisis. The thing that sets this crisis apart from all the previous ones is that you have the feeling that you should take the opportunity to do all the silly things you didn’t do when you were 13, including riding in a hot air balloon, falling in love with a top model, having toast and absinthe for breakfast, and smearing crap on your face.

I’ve always used one of those minty liquids as aftershave. After massaging it in the first time you feel effervescent, and by the end of the second massage you’re completely drunk. In my journey towards modernity, I bought an extra gentle aftershave lotion. It says on the package that it absorbs quickly, leaves no residue, is alcohol-free, doesn’t sting, and doesn’t leave your face greasy. It’s a white cream with a dubiously masculine scent. I massaged my face with it for 10 minutes, hoping my skin would absorb it. To no avail. In the end I stepped out into the street hoping that the wind would dry my face. Whilst walking along the beach, a gust of sand-filled wind and behold, my face looked like a damn chicken nugget. Even after scrubbing with acetone and a bristly brush, my skin is still oily, and every time I touch my chin absentmindedly with my fingers, my cell phone slips out of my hands.

If there is one thing that worries men, it is hair loss. The pharmacist recommended the latest trend in hair lotion. It is to be applied every night for a month. It is paid in installments over 30 years. I still can’t say if it is effective. But what is certain is that, when I apply it before going to sleep, I end up with a pillow and a face full of cream, and now I’m starting to notice suspiciously bushy eyebrows, and my eyelashes have become so strong that I can hang my car’s spare tire on them.

This same pharmacist told me that the exfoliating shower gel for men will change my life. It feels like a normal gel with little crystals. When you lather up, the gel acts as a gel, and the crystals act like crystals, so my skin is torn into red strips, as if I’d been fighting a devil cat possessed by Satan himself.

I have also been given a moisturizer for real men. The pharmacist and I had an argument over this one. My reasoning: If I’ve been hydrating with Scotch on the rocks for 40 years, why the hell should I now replace it with a cream that smells like baby wipes? In the end I sprayed it only on my hands, and that cost me another scolding. Apparently, this one’s for the body. There is another one for hands, but it is even more expensive. Some days it is better not to get out of bed.

The star product is an anti-aging cream. The sales clerk tells me that, even though I’m pretty as a daffodil, those little wrinkles are starting to appear and they need to be stopped. I had planned to try it today, but with so many new bottles in my bathroom, I mistook the anti-aging cream for toothpaste, and now I have milk teeth again. One drops out every half hour, and I have had to order baby food. You can imagine how the toothpaste feels: icey-itchy-Arctic-explosion-total-and-absolute-freshness-on-the-face. It stings like getting into a bed with a hundred drunken porcupines.

The pharmacist gave me a free tester for something to get rid of dark rings under the eyes. A word of advice: Don’t use it if you are allergic to pollen. I was tracing the dark rings under my eyes when I suddenly felt a huge sneeze coming on, and now instead of two eyes I have one eye and a stick of dark ring remover poking out where the other one used to be.

The girl at the pharmacy told me that I need a special men-with-beer-belly slimming cream. I find all this humiliating. But as a journalist, I have an obligation to try it and tell you about it. The slimming cream sucks. I slathered it on the bread in my roasted pork and cheese sandwich, hoping it would reduce how fattening it is. I was admitted two hours later to the hospital, where I was told that, more than a stomach pumping, I needed to change the entire chassis.

Finally, I was advised to use a cleansing face mask for men before bed. The sum of all humiliations is seeing yourself in the mirror in your pajamas with a face full of hardened mud and two damn cucumber slices over your eyes. I fell asleep and the stuff went rock hard, and I had to lie on my back, motionless as Tutankhamun. Today I was unable to remove it even with hot water, and I had to go down to the pharmacy, where they managed to break it off with a pick and a shovel. I also got a broken nasal septum after a failed hammer blow. Apparently, I should have removed it with warm water after a few minutes.

In conclusion, during these times when the whole world is conspiring against men and masculinity, I consider postmodern male cosmetics to be just a euphemism for chemical warfare against guys. If you can, resist. We will prevail. Bear in mind that on my aftershave lotion, just under the logo, it says “Since 1940, B.C.”