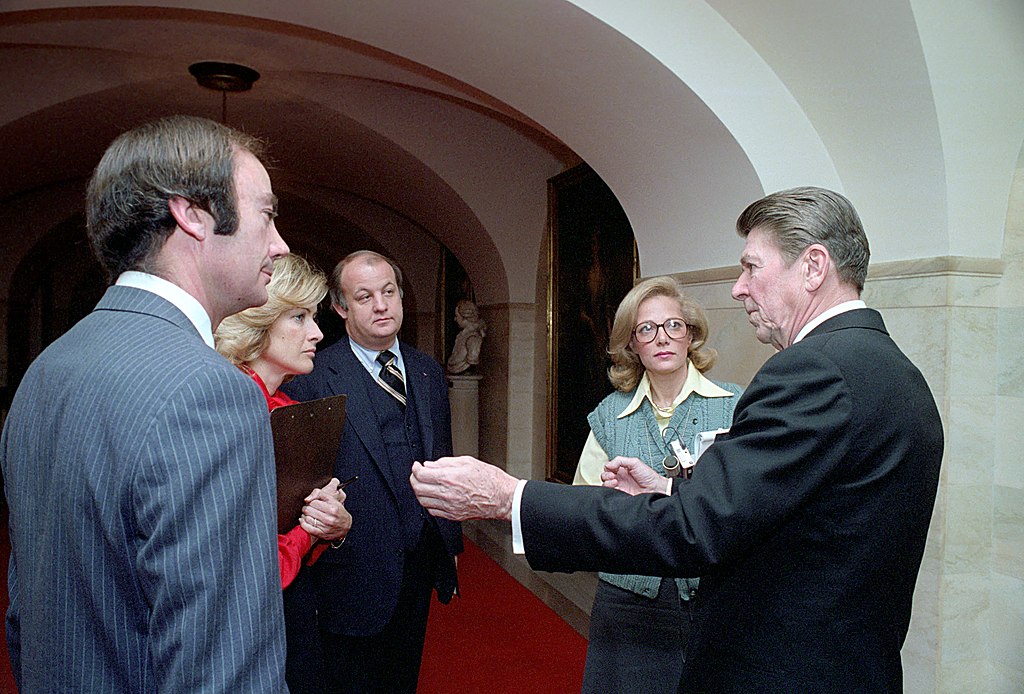 It was a mere nine days after President Ronald Reagan’s inauguration as president, and this day would bring his first presidential press conference.

Safe to say what Reagan said shocked the assembled media of the day. In today’s world of all times, it is important to recall what he said.

The presser began benignly, with Reagan opening in a fashion typical of presidents:

How do you do? I have a brief opening statement here before I take your questions.

From there the new president launched into a standard laundry list of his actions and requests to Congress, all primarily directed to the main issue that had elected him — the state of the economy.

Quickly enough, in a bow to traditional protocol for presidential press conferences, he turned to the senior reporter covering the White House, the UPI’s Helen Thomas, to open the questions. It took five questions before — but of course — ABC’s Sam Donaldson, who would go out of his way to set himself up as a never-ending Reagan critic (the Jim Acosta of 1981!), asked this question:

Sam Donaldson: Mr. President, what do you see as the long-range intentions of the Soviet Union? Do you think, for instance, the Kremlin is bent on world domination that might lead to a continuation of the Cold War, or do you think that under other circumstances détente is possible?

For those who came in late, it needs to be reminded that Reagan was, in the day, famous (infamous to liberals and GOP Establishment types) for his decades-long outspoken anti-communism. Reagan as movie star had emerged as a staunch opponent to the presence and activities of communists in Hollywood in the late 1940s and early 1950s, when he served as president of the Screen Actors Guild. He was such a vocal opponent, including in testimony to the then-controversial House Committee on Un-American Activities, that he once received an anonymous phone call warning him that if he didn’t shut up he would have acid thrown in his face. This being a presumed threat to end his film career, which, as was frequently true in Hollywood then and now, depended in part on his boyish good looks. The threat only stiffened his opposition to the thug-style behavior of communists.

But as time when on and he became more of a political presence, Reagan’s open opposition to communism became even more vigorous, eventually backed with his presence as California governor and a serious potential GOP presidential candidate. This came to a head of sorts in his 1976 challenge to incumbent GOP President Gerald Ford, with a sharp difference over the issue of “détente” — the go-along-to-get along view of both the Establishment GOP and many liberal Democrats when it came to dealing with the Soviet Union.

Reagan would have none of this. The real underlying meaning behind Donaldson’s question in this opening press conference was in reality this: “Mr. President, you are president now, not a candidate or private citizen. Isn’t it time for you to be presidential and go along with détente? Shouldn’t we try to get along with the communists?”

Reagan never hesitated. His answer, verbatim, was this, bold print for emphasis supplied:

The president: Well, so far détente’s been a one-way street that the Soviet Union has used to pursue its own aims. I don’t have to think of an answer as to what I think their intentions are; they have repeated it. I know of no leader of the Soviet Union since the revolution, and including the present leadership, that has not more than once repeated in the various communist congresses they hold their determination that their goal must be the promotion of world revolution and a one-world socialist or communist state, whichever word you want to use.

Now, as long as they do that and as long as they, at the same time, have openly and publicly declared that the only morality they recognize is what will further their cause, meaning they reserve unto themselves the right to commit any crime, to lie, to cheat, in order to attain that, and that is moral, not immoral, and we operate on a different set of standards, I think when you do business with them, even at a détente, you keep that in mind.

There was an audible gasp in the room full of reporters. They had never heard a president of the United States speak this bluntly about the communists running the Soviet Union. It … just … wasn’t … done.

What Reagan’s remarks in fact did was make crystal clear to one and all that the new president had not changed his views of dealing with communists one whit — and that in fact as president he would use his office to deal accordingly with his longtime adversary. Or, as he was said to have once remarked when asked his view of how to deal with the Cold War: “We win, they lose.”

Move ahead to moments like these. Here’s the headline from National Review:

Chinese Doctor Disappears after Blowing the Whistle on Coronavirus Threat

Wuhan doctor Ai Fen, who expressed early concerns about the coronavirus to the media, has disappeared and is believed detained by Chinese authorities.

Fen, the head of emergency at Wuhan Central Hospital, was given a warning after she disseminated information about the coronavirus to several other doctors. She recounted the reprimand in an essay titled, “The one who supplied the whistle,” which was published in China’s People (Renwu) magazine. The article has since been removed.

The reprimand from her boss came after Fen took a photo of a patient’s positive test results and circled the words ‘SARS coronavirus’ in red.

She brought several cases of coronavirus to the attention of her colleagues, eight of whom were later called in by police for revealing information about the respiratory illness, according to Radio Free Asia. One, opthalmologist Li Wenliang, warned fellow med school grads to wear protective clothing, an early warning that was condemned by authorities as “rumormongering.” Wenliang eventually died from the virus himself.

Then there is the Time magazine headline of a story that is now everywhere:

That story says, in part, this:

(WASHINGTON) — U.S. officials believe China covered up the extent of the coronavirus outbreak — and how contagious the disease is — to stock up on medical supplies needed to respond to it, intelligence documents show.

Chinese leaders “intentionally concealed the severity” of the pandemic from the world in early January, according to a four-page Department of Homeland Security intelligence report dated May 1 and obtained by The Associated Press. The revelation comes as the Trump administration has intensified its criticism of China, with Secretary of State Mike Pompeo saying Sunday that that country was responsible for the spread of disease and must be held accountable.…

Not classified but marked “for official use only,” the DHS analysis states that, while downplaying the severity of the coronavirus, China increased imports and decreased exports of medical supplies. It attempted to cover up doing so by “denying there were export restrictions and obfuscating and delaying provision of its trade data,” the analysis states.

The report also says China held off informing the World Health Organization that the coronavirus “was a contagion” for much of January so it could order medical supplies from abroad — and that its imports of face masks and surgical gowns and gloves increased sharply.

Now the obvious point. The Chinese people do not run China, any more than the Russian people ran the Soviet Union.

unto themselves the right to commit any crime, to lie, to cheat, in order to attain that, and that is moral, not immoral, and we operate on a different set of standards, I think when you do business with them, even at a detente, you keep that in mind.

Hence, as documented, to warn the public of the disease if you are a Chinese doctor — instead of being listened to and taken seriously, you are “disappeared,” silenced, lucky if you are allowed to live. All courtesy of the ruling Communist Party government.

Clearly, President Trump has this problem with communists exactly on his mind as he deals with China. It is Trump who made China’s trade policies with the United States an issue in the 2016 campaign. It is Trump who, as with Reagan and the Russian communists, had the willingness to confront the head of the CCP over trade issues and more. And it is Trump who is now calling out the CCP leadership on the virus.

They allowed this to go into our country, other countries. This should never have happened. This virus should not have spread all over the world.

The problem now where U.S. China policy and China policy for the rest of the world goes from here. The first — and second and third and more — responses is and will continue to be to get the virus under control. To do the necessaries to win back our freedoms and maintain the public health with an eventual vaccine to make this virus a very treatable problem.

But once in hand, the question will still be there. What to do with China? The most obvious thought, well-discussed elsewhere, is bringing back the control of, as Fox News says, “everything from painkillers, to antibiotics, and even aspirin” that are currently made in China. Indeed the very idea that so much of American manufacturing and more has been outsourced to China has to be reexamined if not halted altogether.

There is no point in going out of our way to make China a hostile enemy in a fashion that initiates some unneeded military conflict. Reagan never got into a shooting war with Russia. But to believe as former Vice President Joe Biden believed when he said, barely a year ago, that the Chinese communists are “not bad folks, folks…. [T]hey’re not competition for us” is not merely foolish; it can be lethal.

Without doubt, President Trump gets it.

And America is better off for it.