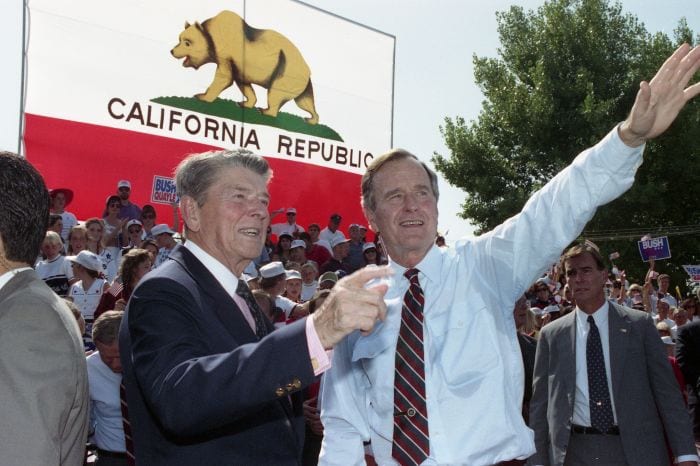 When I moved to Orange County in the mid-1990s, it was still the most Republican county, in raw numbers, in the United States. Virtually anyone with serious political ambition there ran as a Republican, although changes were starting to appear. Democrat Loretta Sanchez eked out a victory over GOP firebrand “B-1 Bob” Dornan in the 1996 congressional election — something Dornan blamed on invalid votes, but others knew was a sign of things to come.

I met Rep. Dornan at a conservative organizing event in Des Moines as he tried to drum up support for his presidential bid. The GOP congressman spent time in Iowa when he could have been campaigning in and around Garden Grove. Sanchez’s victory was a shock at the time, but the county GOP remained strong outside the highly urbanized, ethnically diverse areas of the central county. It was business as usual.

I used to laugh about the GOP’s big election night parties, usually at a posh hotel near John Wayne Airport. Not only would one find virtually every Republican elected official at the festivities, but you’d often find Democratic officials there, too. If you wanted to be near the center of power, you had to attend an event sponsored by the party. The biggest tussles were between conservatives and the RINOs (Republican in Name Only). Democrats were an afterthought.

Orange County wasn’t just Republican, but it was the Republican Mecca. Ronald Reagan was propelled into politics by OC activists and donors. Richard Nixon, originally from Yorba Linda, had his Western White House in San Clemente. But as the county’s defense-based economy and demographics changed, so did its politics. I recall when Republicans dismissed the chances of an upstart Democratic Assembly candidate, Lou Correa, who not only won the 1998 election but now is a member of Congress.

Republicans struggled for years to overthrow a prominent liberal Democratic mayor in Irvine, and they finally accomplished that task a few years ago. But it’s just a footnote now. The county government released its latest voter-registration figures, and Reagan Country is a memory. Democrats have grabbed a slight registration advantage over Republicans. The small lead is mostly about bragging rights, but it’s the final psychological blow to a county party that’s long been collapsing.

Orange County Republicans had been operating as if nothing had changed, but in 2016 Hillary Clinton received more votes than Donald Trump. The biggest setback came in the midterms. Democrats took every OC congressional race and made serious gains in state legislative seats, too. These days, the county GOP would be more than happy to have lawmakers who were Republican at all, whether in name only or not.

This has enormous ramifications for the state as a whole. California Republicans counted on Orange County’s overwhelmingly GOP vote totals to overcome its disadvantage elsewhere in statewide races. Now that its most Republican large county is pretty evenly split, where will Republican votes come from to help balance Democratic strongholds elsewhere? Placer County, in the foothills east of Sacramento, remains strongly Republican, but it has fewer than 400,000 residents. No wonder Republicans are no longer competitive in any statewide races.

The recriminations are pointless. Some Republicans blame the president for pushing wealthy and diverse suburban counties into the blue column, while others blame immigration for the ultimate changes in voting patterns. Republican-minded voters have been fleeing the state for years, which hasn’t helped, either. Others blame the party’s leadership. Whatever the case, the GOP needs to face up to reality and come up with new strategies to stay relevant, or the death spiral will continue.

There’s opportunity in those numbers. It’s not as if California voters are in love with the Democrats, either. There are plenty of issues that Republicans can tap — road congestion, a housing crisis, service cutbacks, crime hikes, poverty rates, growing pension liabilities — but the party’s poor leadership and outdated thinking have gotten it nowhere.

At the state level, Republicans always get obliterated now. The two non-liberals who came closest to winning in the last election cycle both lacked the GOP label. Former Republican Steve Poizner ran for insurance commissioner as No Party Preference and lost by nearly 6 percentage points to Democrat Ricardo Lara. Pro-charter-school candidate Marshall Tuck came within 2 percentage points of teachers’ union ally Tony Thurmond in the nonpartisan race for superintendent of public instruction. Compare that to the governor’s race, in which Democrat Gavin Newsom beat Republican John Cox by 24 percentage points.

There’s probably no realistic hope for Republicans or any sense of political competition, and we just have to live with the political consequences. These trends have been in the works for two decades, but OC’s final flip from red to blue adds a punctuation point to California Republican decline. Perhaps the GOP can be heartened by an old Reagan quotation: “The future doesn’t belong to the fainthearted; it belongs to the brave.”