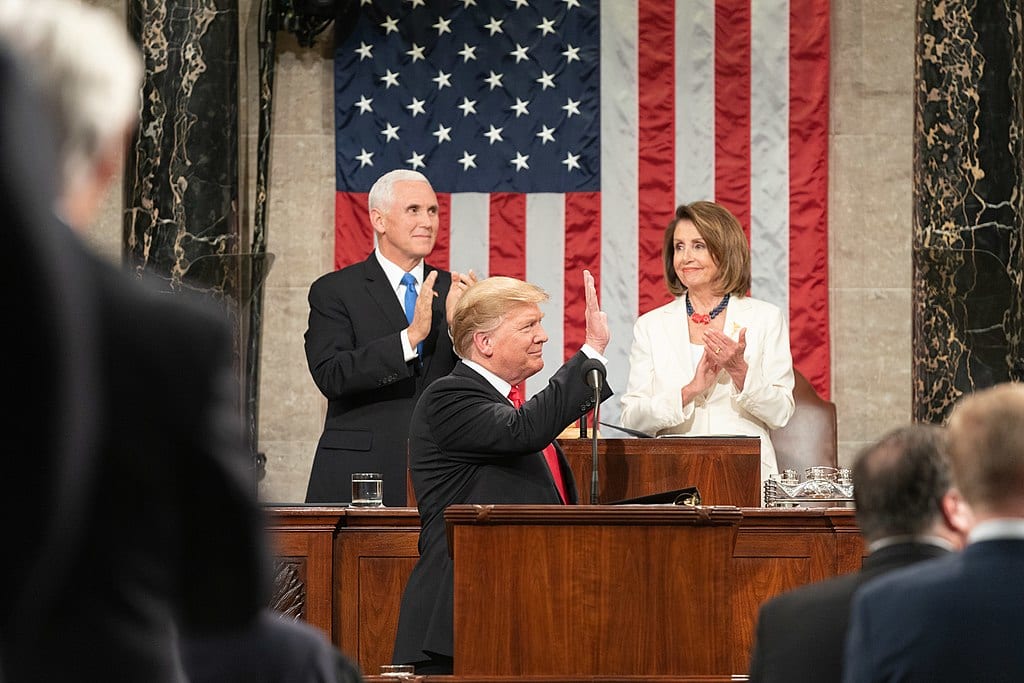 Since politics in 2019 is the art of making the other party look worse, President Donald Trump’s State of the Union address was a partisan home run.

It was a solid speech that showed Trump reaching across the aisle by proposing policies such as paid family leave that should be wildly popular with Democrats.

But it also showed his playful side. In his third address to a joint session of Congress, Trump was downright jovial; when he disagreed, he wasn’t personal.

Which left Democrats looking like the obstinate and petulant party.

Start with the suffragette white worn by female Democratic House members. Former Democratic San Francisco supervisor Angela Alioto wrote on Facebook, that “if you HAVE to dress alike,” pick red “for power and fearlessness.” As it was, “they looked like a group of nurses.”

I would add, nurses who work in an institution that smells like disinfectant.

When Trump touted the good news on unemployment for people with disabilities, C-SPAN turned its lens on House members. I saw more ladies in white scratching their heads than clapping. Ditto for when Trump talked about doubling the child tax credit.

The left rightly can deride Trump for being obstinate and petulant. Tuesday night, Trump was in good humor and Democrats came across like Trump on an angry morning Twitter tear.

Many — I am one — have criticized Trump for constantly playing to his base and not reaching out to the middle.

In his State of the Union address, however, Trump talked about wanting legal immigrants to come into the country “in the largest numbers ever, but they have to come in legally.” Crickets in the white wing.

At a meeting with regional reporters Wednesday, Trump confirmed it was a new policy because he said the country needs workers in “factories and plants and companies that are coming back in.”

Don’t hold your breath waiting for the Democratic leadership to push for more legal immigration, however, just as they did not seize on Trump’s offer to extend legal status to some undocumented immigrants in exchange for funding for his border wall.

A cynic would say Democrats prefer to keep “Dreamers” — undocumented immigrants brought into the United States as children — on the hook so they can use the issue at the ballot. President Barack Obama didn’t get it done when Democrats controlled the House and Senate.

Trump also found a clever way to show how extreme Democrats have become.

He brought up his administration’s recognition of Juan Guaido as interim president of Venezuela — a departure from Trump’s “America First” focus and a coup for human rights. This time, most Democrats’ applause seemed genuine, not perfunctory.

Then Trump condemned “the brutality of the Maduro regime, whose socialist policies have turned that nation from being the wealthiest in South America into a state of abject poverty and despair.” Bernie Sanders, the Democratic-caucusing senator from Vermont, sat stone-faced.

When Trump later added, “Tonight we renew our resolve that America will never be a socialist country,” Senate Minority Leader Chuck Schumer wisely stood up and applauded. House Speaker Nancy Pelosi stayed seated, smiled slightly and clapped dutifully — like it was a chore to be on the record opposing socialism.