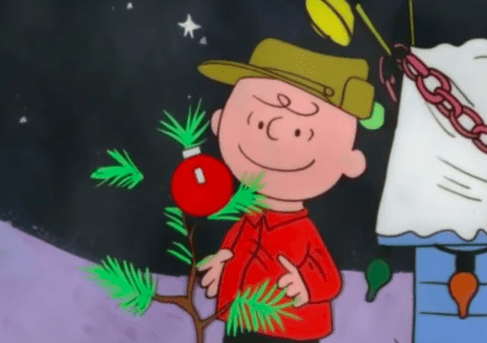 President Donald Trump added a radical twist to the annual National Christmas Tree Lighting ceremony last Friday by invoking the divinity of Jesus Christ. You would think revering the season’s central figure would be expected, but you’d be wrong. Although his predecessor, Barack Obama, mentioned the Nativity in general terms as “the story of a child born far from home … who’d ultimately spread a message that has endured for more than 2,000 years,” the more direct Trump went right to the sacred heart of the matter.

“As the Bible tells us, when the wise men had come into the house, they saw the young child with Mary, his mother, and fell down and worshipped him. Christians give thanks that the Son of God came down to save humanity,” Trump said. In fulfilling his promise to renormalize the greeting “Merry Christmas” away from the deliberately vague “happy holidays,” Trump venerated the Yuletide’s raison d’être. Hollywood didn’t get the memo, though. That’s no surprise; the industry has long had a problem with religiosity.

Last week, ABC re-broadcast the perennial classic, A Charlie Brown Christmas, on its 54th network run. By now almost everybody has seen the Peanuts holiday special, along with its show-stopping climax. Right after Charlie Brown, depressed by the commerciality of his Christmas, cries, “Isn’t there anyone who knows what Christmas is all about?,” Linus calmly responds, “Sure, Charlie Brown, I can tell you what Christmas is all about.” He climbs onto the school stage, gets spotlighted, and proclaims the Gospel according to Luke, King James Version, verbatim on national television:

And there were, in the same country, shepherds abiding in the field, keeping watch over their flock by night. And, lo, the angel of the Lord came upon them. The glory of the Lord shone round about them, and they were sore afraid. And the angel said unto them, “Fear not, for behold I bring you tidings of great joy, which shall be to all people. For unto you is born this day in the city of David a Savior, which is Christ the Lord. And this shall be a sign unto you; ye shall find the babe wrapped in swaddling clothes, lying in a manger.” And suddenly there were with the angel a multitude of Heavenly hosts praising God and saying, “Glory to God in the highest, and on Earth peace and goodwill toward men.”

This scene would be anathema to any contemporary Hollywood production, and it was controversial even in 1965. Rookie animation producer Lee Mendelson and director Bill Melendez actually argued against it, afraid it would kill their big break. They were already on thin ice for two revolutionary decisions on a kids’ show: the adult jazz score by little-known composer Vince Guaraldi, and having child non-actors voice the dialogue. A literal deus ex machina ending was suicidal, they thought. “There’s never been any animation that I know of from the Bible,” said Mendelson. “It’s kind of risky.” But the third man on the team disagreed and demanded they use it — Charles Schulz, the Peanuts creator. “If we’re going to do a Christmas special, we’ve really got to do it the right way and talk about what Christmas is all about,” said Schulz, a Sunday school teacher. “If we don’t do it, who will?”

When CBS executives saw the finished product, they balked. “You can’t read from the Bible on network television,” one of them declared. But they had an unbreakable commitment to the show’s sponsor, Coca-Cola, so the special aired on schedule, December 9, 1965. That night, A Charlie Brown Christmas drew 15 million viewers and a 45 percent share, coming in second for the week behind Bonanza. It has been an annual ratings winner every year since, and its overt Christian message has been welcomed the world over. I remember sitting in fifth grade at Little Flower Catholic School outside of Washington, D.C., the day after one showing, when old Sister Gabriel gushed about the Luke reading to my class. We kids accepted the Linus recitation as perfectly normal. Yet to the Hollywood powers that be, it remains an unfathomable enigma.

As late as 1977, the same CBS network ran one of the greatest films ever made, Ben Hur, minus its brilliant, beautiful pre-credits sequence — a depiction of the Nativity story. It starts with Joseph and Mary’s passage into Bethlehem, followed by a series of masterful painting-like shots. To a glorious score by Miklós Rózsa, we see a star-filled night sky, with one bright star traveling the screen left to right. It moves over Bethlehem, watched silently by villagers, by the three eastern kings on their camels, and then by shepherds in the field. The star flies past the city, stops, and shines a beam of light on a simple stable. More villagers stand, curious, outside the stable looking in, and they make room for the three kings bearing gifts. The royals kneel down in adoration before the inauspicious Joseph and Mary and her baby. One of the villagers steps back from the rest and blows a horn, signaling the occurrence of something momentous. Then the credits roll — which is where the CBS broadcast began. This must have been an easy decision for the network suits, deeming the sequence too time-wasting. Why should they have cared that the full title of the original book — the bestselling American novel of the 19th century — is Ben Hur: A Tale of the Christ?

I just reread an even older novel, the most famous Christmas-themed fictional work of all time, A Christmas Carol by Charles Dickens. The timeless tale of a bitter misanthrope’s Yuletide-prompted redemption avoids overt religiosity while stressing the unique goodness of Christmas. It has non-clerical charity workers and spirits rather than angels. Yet Christianity permeates the work. Early in it, the accursed Marley’s ghost moans, “Why did I walk through crowds of fellow beings with my eyes turned down, and never raise them to that Star which led the Wise Men to a poor abode?” A little later, Scrooge’s poor clerk Bob Cratchit desperately praises his invalid son, Tiny Tim: “He told me, coming home, that he hoped the people saw him in the church, because he was a cripple, and it might be pleasant to them to remember, upon Christmas Day, who made lame beggars walk and blind men see.” But it is Tiny Tim himself, and Dickens, who speak for all during this wonderful holy season, clear enough for even Hollywood to hear, “God bless us, every one!”