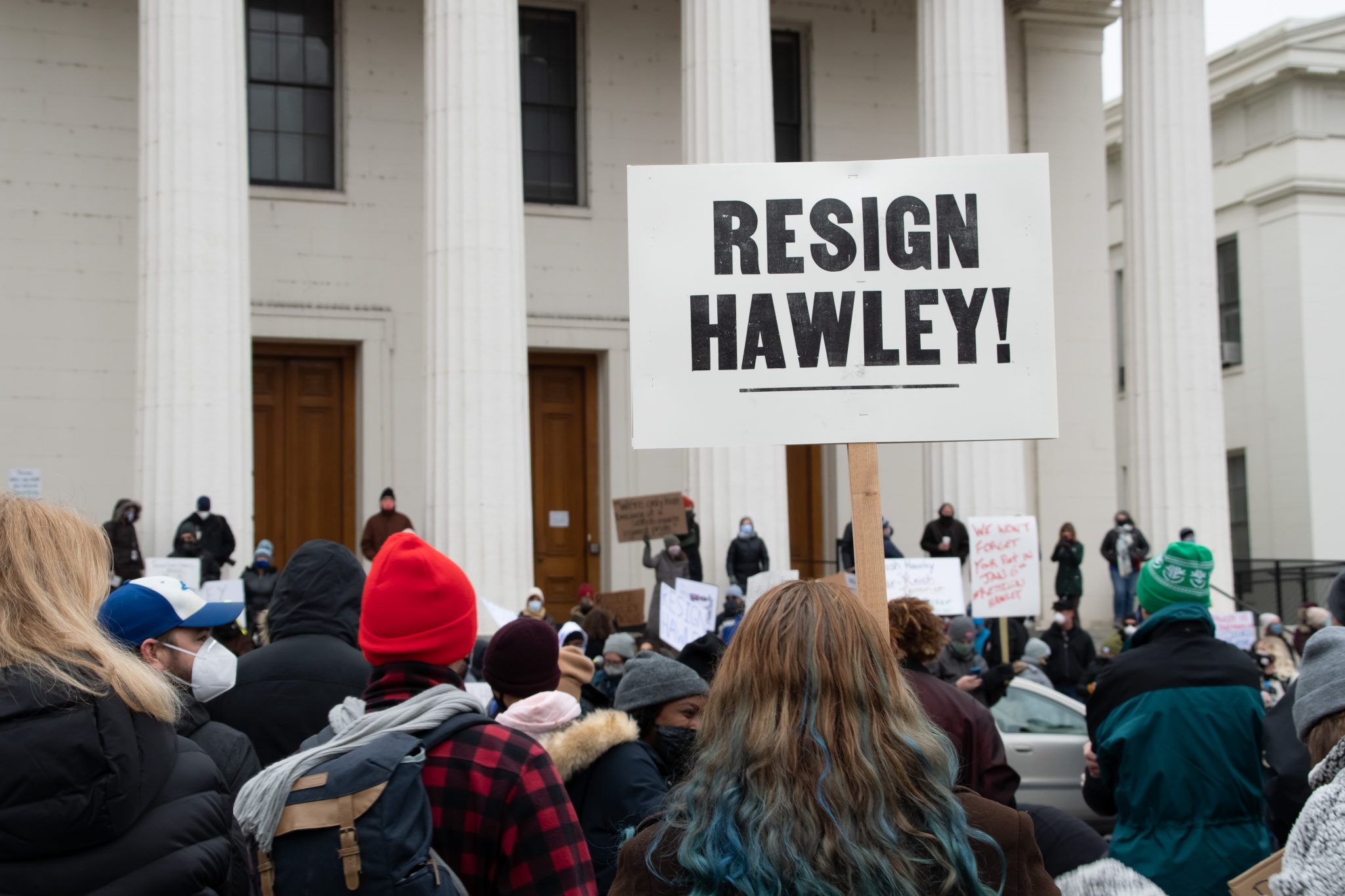 Wrote the future president of courage:

A man does what he must — in spite of personal consequences, in spite of obstacles and dangers and pressures — and that is the basis of all human morality.

His book also said of the eight Senators:

All these men disregarded dreadful consequences to their public and private lives to do the one thing that seemed right in itself….

Both have fearlessly risen on the Senate floor to make plain that under no circumstances would they go along with certifying a presidential election overflowing with voter fraud and law breaking. They were not about to be intimidated by the Washington Establishment and media mob.

And for having that courage they have been repeatedly, relentlessly, and mercilessly assailed by critics — all too frequently, one suspects, critics themselves intimidated by the anti-Trump media mob and the Washington Establishment.

Senator Hawley specifically assailed the violence that was taking place outside the Capital. He could not have been clearer. For those who have concerns about the integrity of the election, he said, the floor of the United States Senate was exactly the lawful place to discuss what happened, to debate, and hopefully resolve the issue.

The Senator zeroed in on the results in my home state of Pennsylvania, focusing — quite correctly — on the state constitution and the fact that it does not provide for mail-in ballots. When the issue was taken to the Pennsylvania Supreme Court — run by hyper-partisan Democrats — the lawyers were dismissed on procedural grounds. Thus the merits of the case have never been heard. The Senator also called for an investigation into voter fraud and election irregularities, and a way to move forward together to resolve this so that Americans can have confidence in the integrity of the election system.

And for saying all of that, here are a sample of the headlines that resulted.

Former Missouri Senator John Danforth: “Supporting Josh Hawley … was the worst decision I’ve ever made in my life. He has consciously appealed to the worst. He has attempted to drive us apart and he has undermined public belief in our democracy. And that’s great damage.”

Nebraska Republican Senator Ben Sasse: “Sen. Hawley was doing something that was really dumb-ass. This was a stunt. It was a terrible, terrible idea. And you don’t lie to the American people, and that’s what’s been going on.”

The Kansas City Star: “Assault on democracy: Sen. Josh Hawley has blood on his hands in Capitol coup attempt.”

And, famously — infamously — Simon and Schuster reneged on its agreement to publish Hawley’s book The Tyranny of Big Tech. Said the publisher’s representative in one of the most Orwellian statements out there:

We did not come to this decision lightly. As a publisher, it will always be our mission to amplify a variety of voices and viewpoints. At the same time we take seriously our larger public responsibility as citizens, and cannot support Senator Hawley after his role in what became a dangerous threat.

Got that? Standing on the floor defending the Constitution and the integrity of the American election system is now a “dangerous threat.” And therefore Hawley must be silenced.

There was an endless amount of garbage like this.

The real, unintended take-away message? Sitting United States Senators and others not only don’t have Hawley’s guts in standing up for the law, the Constitution, and protecting the integrity of the American election system. They are more than willing to pander to the media mob that is lying repeatedly to the American people about what happened in this election.

Then there is Texas Senator Ted Cruz. Senator Cruz has a long and distinguished record of standing up for the Constitution. And his defense of election integrity was crystal clear. Said the Senator in his statement:

We are gathered at a time when democracy is in crisis. Recent polling shows that 39 percent of Americans believe the election that occurred “was rigged.”

Even if you do not share that conviction, it is the responsibility, I believe, of this office, to acknowledge that is a profound threat to this country and the legitimacy of any administrations that will come in the future.

What I would urge of this body is that we do the same (as was done in the disputed 1876 election) — that we appoint an electoral commission to conduct a 10-day emergency audit. Consider the evidence and relive the claims.

Terrible, horrifying stuff, yes? Ted Cruz stood up to support the legitimacy of the American election system and have an electoral commission conduct an emergency audit of the results. And yes, he flatly condemned the violence. Of course he did. But for standing up for the Constitution and an honest election, for this Cruz was just torched. As these examples will illustrate:

Forbes: “‘I Don’t Know How You Can Live With Yourself’: Hawley, Cruz Increasingly Shunned After Capitol Attack”

Again, there was more of this… oh so much more. For standing up for the Constitution and the integrity of the American election system, these two United States Senators have been pilloried, lied about, with clear attempts made by some colleagues to intimidate them into resignation and silence.

Go back to that headline in Forbes. The story that followed also said this:

At least three of their Democratic colleagues in the Senate are outright calling on Cruz and Hawley to resign: Sens. Ron Wyden (D-Ore.), Chris Coons (D-Del.) and Patty Murray (D-Wash.), the No. 3 Democrat in the chamber, who alleged the two senators have “broken their oath of office.”

“There’s no way they cannot be complicit in this,” Sen. Joe Manchin (D-W.Va.), a conservative Democrat who typically eschews the fiery rhetoric of his more liberal colleagues, told Politico, adding, “That they think they can walk away and say ‘I just exercised my right as a senator’.… I don’t know how you can live with yourself right now knowing that people lost their lives.”

And there was this:

Missouri’s two largest newspapers, the St. Louis Dispatch and the Kansas City Star, have called on Hawley to resign, with the Houston Chronicle calling on Cruz to resign and the San Antonio Express-News calling for Cruz to be expelled after initially demanding his resignation.

All of these people are effectively saying that a United States Senator who stands on the floor of the Senate and defends the Constitution and the integrity of the American election system is responsible for mob violence.

In fact, it is crystal clear that the Hawley-Cruz critics are themselves cowering before mob violence, terrified of standing up for the Constitution and honest elections lest they be targeted by the mob that is effectively the Washington/Big Media/Big Tech Establishment.

The wall of shame in this moment, to recount, bears the names of those Hawley/Cruz critics above and so many others who have shirked their duty as Senators, Members of Congress, and the media.

Again, the quote from John F. Kennedy for what makes a Senator a profile in courage was this:

A man does what he must — in spite of personal consequences, in spite of obstacles and dangers and pressures — and that is the basis of all human morality.

Senator Ted Cruz and Senator Josh Hawley did exactly that.

They are exactly the embodiment of a profile in courage.

Texas and Missouri are lucky to be represented by two men of such moral clarity — and courage.

And their critics should bow their heads in shame.