by Paul Kengor
Supreme Court in 1973 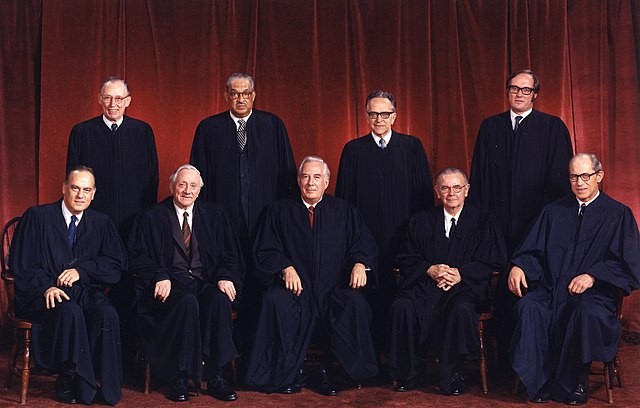 The angry children of the Roe generation — those who have been born — spill into the streets for their summer 2022 Days of Rage. They lash out at Justices Samuel Alito, Clarence Thomas, Amy Coney Barrett, Neil Gorsuch, and Brett Kavanaugh. They also seethe with hatred at the Orange Man with hidden horns who appointed the troika that made possible the overturn of the ridiculous Roe v. Wade and even sillier Planned Parenthood v. Casey.

Their rage, however, is misplaced. They ought to be fulminating at one Harry Blackmun, author of the decision that legalized abortion on January 22, 1973. It was a ludicrous decision, inventing a “constitutional right” to abortion out of nothing actually in the U.S. Constitution, hence ultimately making the Dobbs decision inevitable. Their buddy Harry set them up. He doomed them from the outset. Their ultimate failure, finally rendered on June 24, 2022, via Dobbs, was a fait accompli, thanks to Harry. Their great apostle of abortion long ago betrayed them with a kiss.

Who was Harry Blackmun and how did this happen?

Born in Nashville, Illinois, in November 1908, Blackmun was raised in St. Paul, Minnesota, where his father owned a small store. He was raised a Methodist, the denomination to which he would remain committed the rest of his life, and which would accompany him (and another famous left-wing Methodist, Hillary Clinton) in championing “abortion rights.” In fact, Blackmun did research and writing on the Roe decision inside the United Methodist Church building that sits next to the U.S. Supreme Court. They were proud to host him for his grand opinion.

In 1970, Blackmun was appointed to the Supreme Court by President Richard Nixon, one of a number of terrible appointments by Republican presidents, from Earl Warren under Dwight Eisenhower to Anthony Kennedy under Ronald Reagan to David Souter under George H. W. Bush.

In 1972, Blackmun spent much time toiling over what would become his majority opinion in Roe v. Wade. He was a notoriously slow writer of opinions, and quite simply not the sharpest tool in the shed. Slow and dimwitted, Blackmun frustrated the court’s liberals who hounded and pressured him to create out of thin air a “constitutional right” to abortion. The abortion radicals who pushed Harry were Justices William O. Douglas, William Brennan, Thurgood Marshall, and Potter Stewart. Douglas and Brennan especially were hell-bent on abortion.

As noted by Clarke Forsythe in his superb book, Abuse of Discretion: The Inside Story of Roe v. Wade, these justices badgered Blackmun to speed up his fabrication and find a way to expand it far deeper into pregnancy and much further across the entirety of the country. So successful was this cabal, notes Forsythe, longtime senior counsel at Americans United for Life, that “the outcome in Roe surprised even abortion activists.” The scope of the decision was way broader than anyone expected. Even pro-abortion forces were shocked.

The decision imposed a one-size-fits-all abortion fiat on every single state in the nation in one fell swoop. Forsythe quotes Professor Laurence Tribe, who noted that both Roe v. Wade and (forgotten) Doe v. Bolton had imposed “limits on permissible abortion legislation so severe that no abortion law in the United States remained valid.” Forsythe also quotes Lawrence Friedman, who noted that “in one bold, cataclysmic move, the Court undid about a century of legislative action. It swept away every abortion law in the country.”

Just like that. Blackmun and the boys — seven men in black robes — imposed their will on an entire population in an exercise of sheer, brazen, raw judicial power.

Harry Blackmun cobbled together an outrageous hunk of juridical gobbledygook that came to be known as Roe v. Wade. His decision had no basis whatsoever in the U.S. Constitution. It would have been laughable if not for such truly tragic consequences — i.e., over 60 million abortions of unborn babies. Harry preposterously produced a “right” to an abortion extended from a so-called “penumbra” or “shadow” of a “right to privacy” mysteriously heretofore hidden somewhere in the arcane recesses of the Constitution. Of course, neither abortion nor even the word “privacy” are mentioned in the Constitution — no, not once (look it up). Ironically, the rights and protection of “life” are mentioned three times in the Constitution, in the Fifth and Fourteenth Amendments. Of course, when mentioning life, the framers weren’t thinking about abortion. Nonetheless, at least a pro-lifer can appeal to the word “life” in the document. A pro-abortion person has nothing to cling to.

But Harry and his buddies floated them a flimsy raft. It was a raft that would slowly deflate over time, ready to unplug the instant that the high court had a majority of jurists not poisoned by left-wing ideology.

Hence, Justice Samuel Alito in Dobbs was left with no other rational option but to decide what he did when confronted with the absurdity that was Roe. As he wrote in his majority opinion: “Roe was on a collision course with the Constitution from the day it was decided.” He added: “Casey perpetuated its errors, and those errors do not concern some arcane corner of the law of little importance to the American people. Rather, wielding nothing but ‘raw judicial power’ … the Court usurped the power to address a question of profound moral and social importance that the Constitution unequivocally leaves for the people.”

That’s what Harry Blackmun did. Pro-choice progressives ran with it, despite their ramblings about being great proponents of “democracy.” What Blackmun did was not democratic at all; it was dictatorial. He and six other men invented and thrust on an entire country their own distorted preferences. And even more undemocratically, they dictated their ideological notions to the people of all 50 states.

They had no precedent for their action, even as their progressive apostles would forever thereafter scream about stare decisis in order to protect their beloved Roe.

“Roe found that the Constitution implicitly conferred a right to obtain an abortion, but it failed to ground its decision in text, history, or precedent,” observed Alito.

It relied on an erroneous historical narrative; it devoted great attention to and presumably relied on matters that have no bearing on the meaning of the Constitution … it concocted an elaborate set of rules, with different restrictions for each trimester of pregnancy, but it did not explain how this veritable code could be teased out of anything in the Constitution, the history of abortion laws, prior precedent, or any other cited source.” Moreover, “its most important rule (that States cannot protect fetal life prior to ‘viability’) was never raised by any Opinion of the Court party and has never been plausibly explained.

Precisely, which is why Harry and Roe set up liberals for the predictable failure in Dobbs. Really, they should be thrilled with what they got: Nearly 50 years of the most radical abortion laws in the English-speaking world. They threw wide open the doors to abortion mills in every state, with almost no restraint.

It was quite illustrative that when Thomas asked U.S. Solicitor General Elizabeth Prelogar during the Dobbs oral arguments which constitutional “right” for abortion she was appealing to, Prelogar didn’t even bother with the “privacy” claptrap that is Roe. She instead retreated to “the liberty component of the 14th Amendment,” knowing that Roe’s “rights” are a pile of rubbish.

And now pro-choicers marching in the streets want to protest that some precious “constitutional right” contrived by Roe was taken away from them? Bunkum. The right never existed in the first place. Harry had waved a limp magic wand whose seductive potion to liberals eventually dissipated.

Liberals have been let down by their own liberal justices who have set them up for these failures. Their house of Roe was built on sand. They were suckered. Sold a false bill of goods.

And the man who let them down the most was Harry Blackmun. There’s a price for inventing “rights” that aren’t in the Constitution. And now, their current Days of Rage are merely their long-delayed days of reckoning.