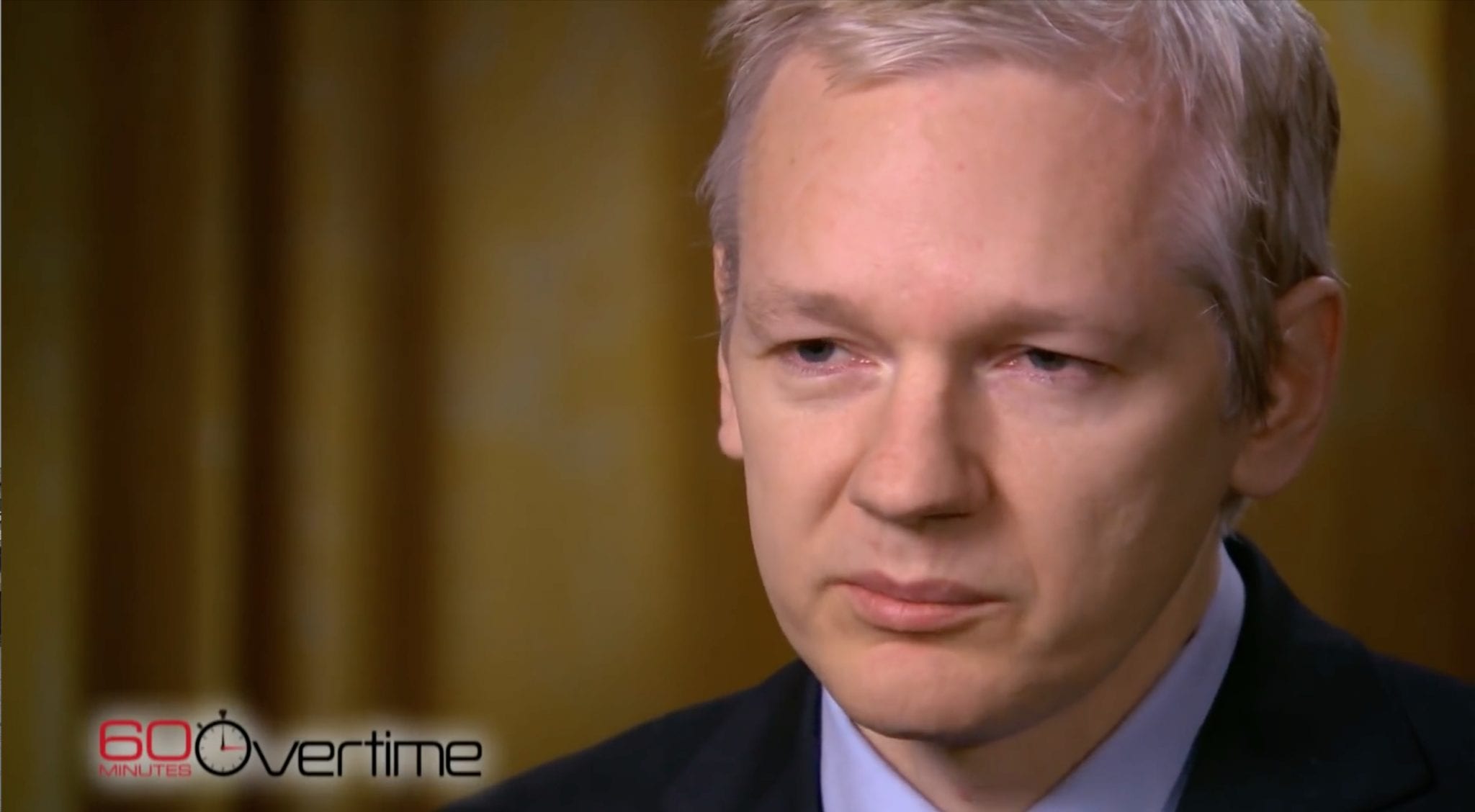 WikiLeaks founder and chieftain Julian Assange was tossed out of the Ecuadorean embassy in London into the hands of British police last week.

Assange is wanted on charges of sexual assault in Sweden and charges of conspiracy to commit computer intrusion in the U.S. He allegedly helped Army private Chelsea (née Bradley) Manning illegally obtain a password that led Manning to leak hundreds of thousands of classified documents to Assange for WikiLeaks to publish.

Both Sweden and the U.S. have requested that Assange be extradited to face justice. It’s not clear which extradition request will be granted first, but one or the other is certain to be.

The OED’s definition of “journalist” is “a person who writes for newspapers or magazines or prepares news to be broadcast on television or radio.” To that we probably have to add people who write about current events for online publications. The key part of the definition is the preparation of news for publication.

Neither does Assange prepare news for publication nor does WikiLeaks publish news. They are merely a pipeline by which U.S. secrets are published with the intent of damaging our national security.

The example of Assange’s behavior that defines him and WikiLeaks was WikiLeaks’ March 2017 publication of a substantial portion of the computer hacking tools that the CIA uses to conduct espionage abroad. The “stories” were published in WikiLeaks’ “Vault 7.” They weren’t news stories revealing what the CIA was doing: it was the computer software itself — the lines of code — that were being used.

The difference there was rather than publish news about the CIA’s behavior and the targets against which the tools were employed, Assange and WikiLeaks published the actual computer software. Doing so gave every adversary — nations, terrorist networks, and others — information which they could use to protect themselves against U.S. espionage.

WikiLeaks isn’t a news publication but a cyber bulletin board on which any leaker can have America’s most closely-guarded secrets published. Assange isn’t a journalist: he’s an anti-American activist whose mission in life is to damage the United States. As Secretary of State Mike Pompeo said when he was CIA director, WikiLeaks functions as if it were a “non-state hostile intelligence service.”

There are journalists who fit the OED’s definition but act as irresponsibly as WikiLeaks does. Consider the actions of the New York Times and Washington Post in two cases: the 1971 publication of the Pentagon Papers and the 2006 publication of the CIA’s “warrantless wiretapping” activity.

In the Pentagon Papers case, an employee of the RAND corporation, Daniel Ellsberg, copied and stole a top-secret analysis of American policy in Vietnam. He leaked the analysis to the New York Times which began publishing parts of the leaked papers.

The matter quickly rose to the Supreme Court which held (by a 6-3 vote) that prior restraint was unconstitutional. In dismissing the claim that prior restraint was justified by national security concerns, the Court said that, “The word ‘security’ is a broad, vague generality whose contours should not be invoked to abrogate the fundamental law embodied in the First Amendment.”

Flash forward to 2006. After the 9-11 attacks, the CIA and the NSA — using their authorities under the new “Patriot Act” and the Foreign Intelligence Surveillance Act, began intercepting and monitoring electronic communications of an enormous number of people, some of whom were inside U.S. borders.

The program reportedly resulted in the interdiction of several terrorist attacks and generated a wealth of intelligence information about terrorist activities both within the U.S. and abroad. It was disclosed to Congress in classified briefings.

A year before publication of the matter, a CIA leaker informed the New York Times about the agencies’ actions, and the Times’ reporters, James Risen and Eric Lichtblau, began writing stories about it. Risen began writing a book on the information divulged by the leaker. The Times informed the government that they intended to publish the details of the “warrantless wiretapping” program.

President Bush and his team could do no more. Under the Supreme Court’s ruling in the Pentagon Papers case, they couldn’t use the courts to restrain publication. They had to rely on the Times’ judgment and patriotism. Both were not sufficient to restrain the reporters, editors, and publisher of the Times.

On December 16, 2005 the Times began publishing its stores on the CIA/NSA program. Risen’s book State of War was released on the same day giving great detail about the program.

The Times, Risen, and Lichtblau acted irresponsibly and despicably. Their actions caused terrorists to change the means by which they communicated. That probably cost American and allied lives and delayed our ability to find Osama bin Laden.

The courts remain divided on the constitutionality of the CIA/NSA program. The CIA leaker, Jeffrey Sterling, was convicted and sentenced to three years in prison.

The difference between what the Times did and what Assange did is not only the fact that the Times is a newspaper and its reporters are journalists. The two differences are reason why one is protected by the First Amendment and the other isn’t.

First, the Times and its reporters were intentionally exposing top-secret information by writing up and publishing the government’s actions. Assange and WikiLeaks published the literal computer software used to conduct espionage against nations and terrorists. The Times’ publication of the CIA/NSA program was, at least arguably, news. WikiLeaks’ publication of the CIA’s hacking tools wasn’t.

Second, Assange and WikiLeaks are complicit in the acts of the leakers whose information they publish. They pay the leakers expenses (and possibly pay them more) as well as help them avoid prosecution.

When Edward Snowden, an employee of a CIA contractor, began leaking top-secret information, he was taken in hand by Sarah Harrison of WikiLeaks which reportedly began to pay his expenses. Assange advised Snowden to travel to Russia instead of South America in order to escape U.S. extradition. Assange, who has had a cozy relationship with Russia and Russian intelligence agencies for a long time, reportedly bought Snowden’s airline ticket to Russia.

Assange’s and WikiLeaks’ are the actions of hostile intelligence agents, not of journalists. For those reasons, they fall outside the First Amendment’s protection of the free press.

Whether Assange is extradited to Sweden to face rape charges before he faces charges here doesn’t much matter. Putting him in prison is justice, but it won’t stop WikiLeaks from functioning. It has become too large, covert, and multifaceted for Assange’s imprisonment to stop its activities.

Because WikiLeaks is acting like a hostile intelligence service it should be treated like one. Every cyber weapon at our disposal should be employed against it.