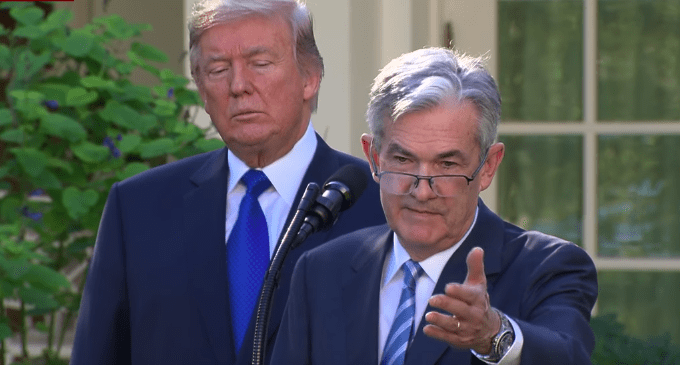 “Just finished a very good & cordial meeting at the White House with Jay Powell of the Federal Reserve,” the president tweeted. “Everything was discussed including interest rates, negative interest, low inflation, easing, Dollar strength & its effect on manufacturing, trade with China, E.U. & others, etc.”

The president perhaps felt compelled to describe the meeting as “cordial” after he spent the summer calling Powell “clueless” and the Federal Reserve “boneheads,” asking in August, “My only question is, who is our bigger enemy, Jay Powell or Chairman Xi?”

The president regards Powell as too tight with money despite the Fed cutting rates three times this year. Trump points to the negative-interest rates of several European countries as a guide. “Give me some of that money,” he recently joked to the New York Economic Club. “I want some of that money.”

Importantly, the countries he cites suffer through anemic economic growth. This stagnation made permanent the ostensibly temporary novelty of negative rates once the gimmick did not lead the economy out of a funk. Sweden, for instance, grew by one-tenth of 1 percent last quarter. Why imitate them?

Beyond this, none of the central banks imposing negative rates do so in countries with deficits or debts even a sizable fraction of our own.

The U.S. Treasury holds auctions quarterly, so bonds offered may exceed $600 billion given the need to service the debt and finance the deficit. Maturities offered at bond sales range from two to 10 years. When final demand is weak, reporting dealers take the bonds into inventory, financing the positions in the repo market. German bonds are a negative 0.5 percent and Greek bonds are 1.1 percent, both paying Euro dollars. Significantly, both countries ran surpluses last year. The 10-year U.S. Treasury note closed at 1.81 on Monday.

Markets recognize that the U.S. budget deficit, forecast to exceed $1 trillion this fiscal year, requires higher interest rates to finance. The reason Germany and Denmark and Japan and other countries can offer negative interest rates involves their very different budgetary situations regarding deficits and surpluses. The U.S. cannot do this because the nation relies on investors to buy bonds that allow us to run a deficit. Who, really, pays for the privilege of lending the U.S. government money?

The notion of negative rates seems preposterous given the reliance on bond buying to finance the massive deficit and unnecessary given the favorable economic conditions. The Dow Jones Industrial Average just closed above 28,000 for the first time. At 3.6 percent, the unemployment rate remains below the threshold that many economists regard as full employment. The gross domestic product grows at about 2 percent.

What happens if the economy goes into recession after the Fed follows the president’s advice to impose negative rates? Exhausted gimmicks, such as negative rates and massive deficit spending, to rescue a drowning economy do not then exist.

The Fed, for its part, released a rote note on Monday’s meeting noting its mandated commitment to policies encouraging full employment and stable prices. An asterisk, explaining “except when the president wants to inflate growth for political purposes” did not accompany the statement.

“Chair Powell’s comments were consistent with his remarks at his congressional hearings last week,” the Fed announced. “He did not discuss his expectations for monetary policy, except to stress that the path of policy will depend entirely on incoming information that bears on the outlook for the economy. Finally, Chair Powell said that he and his colleagues on the Federal Open Market Committee will set monetary policy, as required by law, to support maximum employment and stable prices and will make those decisions based solely on careful, objective and non-political analysis.”

Just as careful observers need no explanation for why the president felt it necessary to describe the meeting with Powell as “cordial,” the use of “non-political” by the Fed requires no translation to understand it as a cordial way of saying it concerns itself with the economy and not the election.