by Larry Thornberry
Protesters in Austin, Texas, after the leaked Dobbs opinion, May 14, 2022 (Vic Hinterlang/Shutterstock) 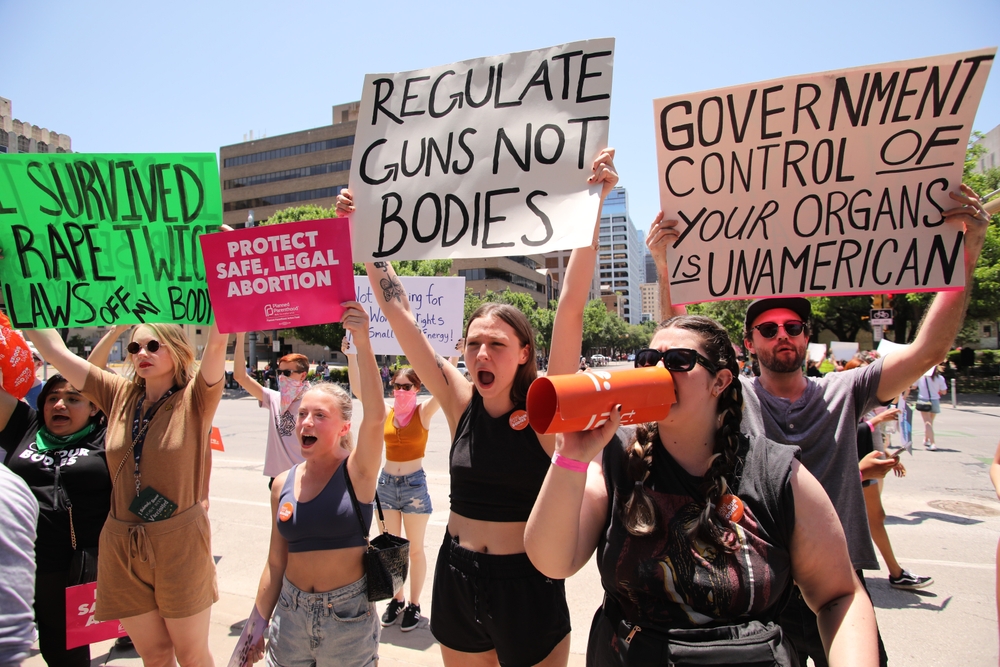 It was a sensible decision, cancelling a phony right manufactured by seven politically motivated justices half a century ago. The 1973 decision led to roughly as many deaths as did World War II.

Predictably, last week’s long-overdue correction led to yet another demonstration that America’s affluence and the abundance of leisure time it produces are not unalloyed blessings. Blessings when properly used, these joys can also allow people fortunate enough not to have been aborted by their mothers to remain infants for a lifetime.

Spoiled Americans in large numbers took to the streets after Friday’s judicial correction for an embarrassing pity party. They banged their spoons on their highchairs, threatened to hold their breath, and made it clear, fortissimo, that “We’ll do the cancelling around here, thanks very much.” In the exhaustive and exhausting media coverage of the postpartum rampages, I have to wonder at the total absence of the word “tantrum.” Parents of 4-year-olds will also wonder.

Of course, the post-decision behavior hasn’t been exclusively infantile. Some of it has been downright criminal. And it hasn’t escaped notice that nearly all of the most destructive behavior by free-range vandals has taken place in states where abortion will remain legal. Calm has pretty much prevailed in the states where — post-Roe — abortions will be most restricted.

Spoiled Americans in large numbers took to the streets after Friday’s judicial correction for an embarrassing pity party.

When one looks at the crowds of pro-death demonstrators/rioters — made up almost entirely of white college students idling on daddy’s dime and somewhat older middle-class women with the money to travel — one is justified in wondering what on Earth happened to personal responsibility. Absent from coverage of the issue is the obvious fact that birth control is available, effective, and inexpensive. The level of personal responsibility required to avoid unwanted pregnancies is minimal. The people hamming it up appear to have the resources and should have the wit not to need an abortion. The small number of Americans who can’t afford birth control can access it through the welfare state.

But personal responsibility, once a central part of the American creed, has taken on a bad odor among the bat-guano Left that prefers dependents to free citizens. Witness the hysteria and cries of “voter suppression” and “racist, racist, racist” that inevitably follow the efforts of any state to pass laws obliging voters to prove who they are and that they’re eligible to vote before being allowed to cast a ballot. The very soul of reasonableness, one would think. But no, the cynical Left labels these efforts “a return of Jim Crow” and wails that these laws place an undue burden on black voters.

The plain truth is that the election laws of our states are easy for anyone of any complexion to comply with. Anyone eligible to vote can get the required ID, register, and vote in the proper precinct in the prescribed manner at the right time without breaking a sweat. How can anyone not notice how patronizing and downright racist it is to suggest that blacks are incapable of jumping through the minimal hoops required to legally vote?

Now it seems that an alarming fraction of the population considers it racist, sexist, homophobic, colonialist, and anti-vegetarian to suggest that American citizens have the agency to live full and responsible lives without a smothering administrative state cleaning up after their every dereliction. This large fraction includes elected officials, almost exclusively Democrats, from President Clouseau on down, who egged on the mob this week with preposterous and apocalyptic rants. It would be a stiff competition to choose the most dishonest and demagogic of these. God will get these villains later. But in the meantime, they’re doing great damage to the American experiment. (READ MORE: Left Has Mental Breakdown Over Abortion)

In his moving Gettysburg Address, Honest Abe pondered whether a nation “conceived in liberty” could long endure. Well, we’ve endured, sometimes even prevailed, for more than a century and a half since the day Lincoln delivered that speech. But if he were alive today, Lincoln would have every reason to worry about the long-term prospects of the last best hope of Earth. In too many cases, liberty has been aborted in favor of dependency. Not the way to survive, let alone endure.