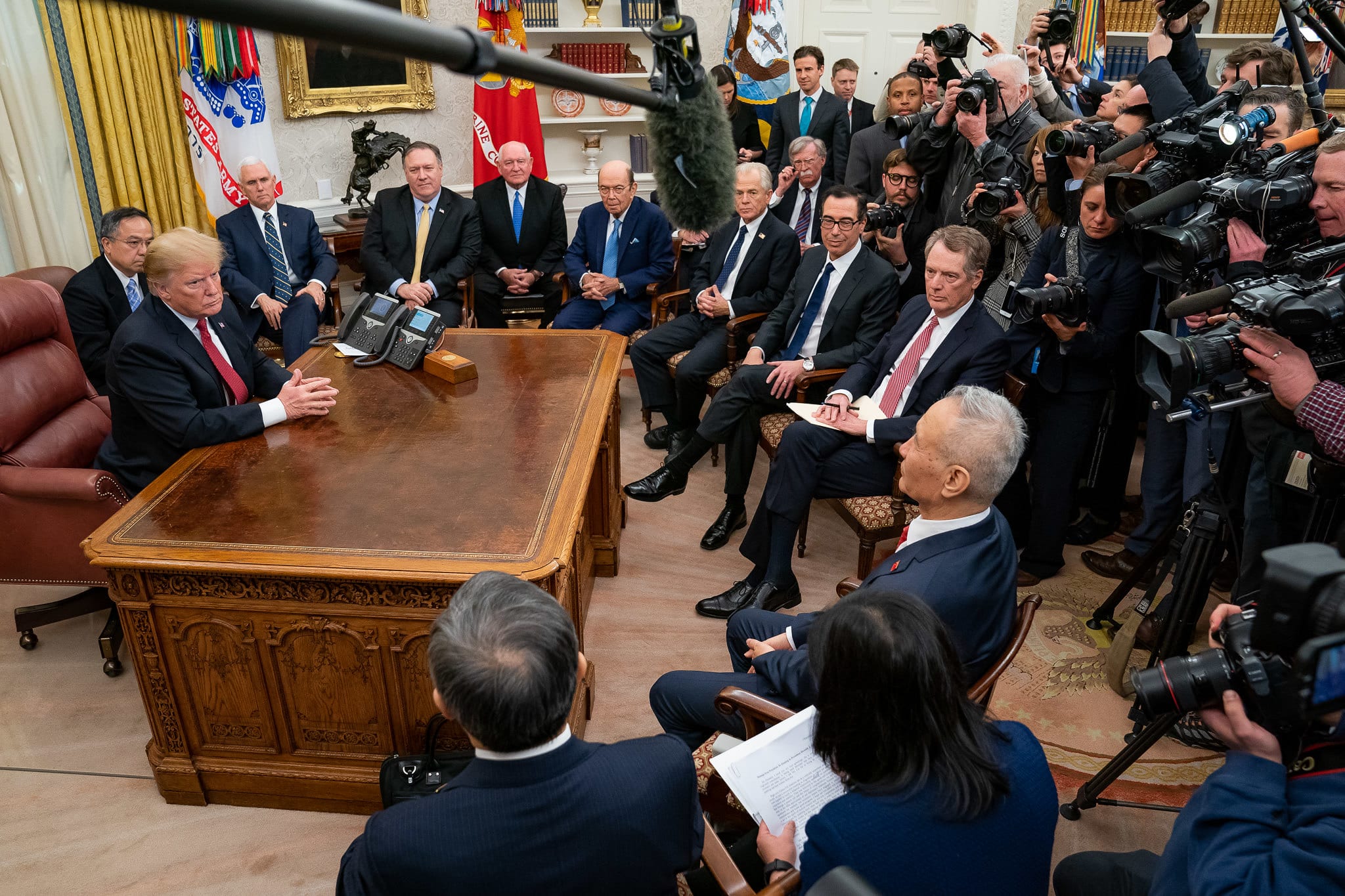 COVID-19 hasn’t finished wreaking havoc on the world. Its physical, economic, and political effects will linger and affect the world for years to come. Because those effects are changing the world, we should begin to analyze how our foreign policy should deal with them.

The COVID-19 pandemic is a historic event that is already shifting regional and global balances of power. As we’ll see in a moment, it may weaken or destroy alliances. It may also slow some of our adversaries’ aggression.

What follows is an overview of what could, and arguably should, be America’s goals and methods of conducting foreign policy over the next four years. It is based on the presumption that President Trump is reelected. If he is not, we can expect that all we consider here will be ignored or even strenuously opposed.

After the terrorist attacks of September 11, 2001, our foreign policy inevitably tilted to emphasize defense policy over economic policy in roughly an 80-20 ratio. During the next four years, the balance will be changed to roughly a 50-50 ratio. We first have to engineer our economy’s recovery and then apply its force in America’s interests.

The U.S. economy has been the world’s principal engine of freedom since about 1942. Though damaged severely by the pandemic, there is no reason to doubt that our economy is still stronger than any other nation’s. Unless we suffer a second round of the pandemic, our economy will recover quickly, probably before the year is out.

The damage to Europe is more severe, and will be longer-lasting, than the damage America has suffered. The European Union (the members of which are nearly all members of NATO) has agreed on an initial economic stimulus, but they cannot agree on solutions to the EU’s underlying problems.

The EU — especially nations such as Italy, Spain, and France — have suffered many thousands of deaths and massive economic damage from the pandemic. The “Schengen Agreement,” by which all citizens of EU states could move freely across the EU, was the first casualty of the pandemic. With its advent, many EU nations imposed strict border controls.

In April, EU leaders agreed on a €500 billion relief package for member nations but rejected the “coronavirus bonds” insisted on by Italy to share its — and other poorer members’ — debts with wealthier states such as Germany. Some EU nations, such as Italy, Spain, and France, are buried deep in debt. One of those nations might lead others into a default on national debts, leading to a collapse of the euro currency and, eventually, the dissolution of the EU.

One of President Trump’s biggest foreign policy initiatives tried to push the NATO member nations to spend more on their own defense to relieve the burden we’ve shouldered since World War II. Nations such as Germany and France — worst among the deadbeats of NATO — now have every excuse to refuse to meet their defense spending commitments.

Neither NATO nor the EU will soon disappear, but both have been gravely weakened by the pandemic. NATO’s credibility as a deterrent has evaporated.

In 2021, with a reelected president, America will again be the world’s primary economic force. The economies of our principal adversaries — China and Russia — will recover more slowly, reducing, but not ending, their abilities to oppose our foreign policy initiatives.

Ambassador James S. Gilmore is the U.S. representative to the Organization for Security and Cooperation in Europe. He is one of the leaders in opposing Russia’s ambitions in Europe and has given considerable thought to how the pandemic will affect America and how our economic competition with other states will continue.

Americans are already used to working remotely and using technological advantages such as videoconferences. The pandemic will make that even more common. While I believe that personal contact in meetings and other gatherings is usually more productive, the use of video conferencing and working at home will help our economy recover more quickly than our adversaries’. Nations such as Russia and China, because they are totalitarian or authoritarian, cannot compete with us. They don’t engage people’s freedom to work in their own self-interest to create wealth. We will win the future economic competition with them for that reason alone.

Gilmore is precisely right. Our economy is strong enough to recover quickly without further government interference. The $2.2 trillion stimulus enacted in April will help, but further spending is likely to create more debt without commensurate economic gain.

China has been trying for more than a decade to replace the dollar with the yuan as the international reserve currency, the currency that nations gather and hoard to preserve their wealth. Nations understand that because of the pandemic’s devastating effect on the Chinese economy, the yuan is now vastly weaker than the dollar. Part of our foreign policy must be to ensure a strong dollar remains the international reserve currency.

Vladimir Putin’s regime has been using its economy as an element of its “hybrid warfare” aggression in Eastern Europe. Putin has chosen to sell one of Russia’s principal assets — its oil and gas reserves — to pay for his aggression.

Part of Russia’s strategy is evidenced by the “Nord Stream” pipelines sending gas to Western Europe, attempting to make Germany dependent on its natural gas supply. If Russia cuts off its supplies, Germany and other nations will try to buy from other sources.

To deal with Russia’s European ambitions, we should negotiate free trade agreements with many European nations, including many of those the Russians are targeting. Fair economic relations with Russia’s other targets in Eastern Europe should be a priority for the president.

China’s negligence and malfeasance in the first days of the outbreak led to the global pandemic. Its disinformation campaign, denying its responsibility and attempting to create the false narrative that the U.S. somehow smuggled the virus into China, is typical of its actions. Holding China accountable should be a priority in our foreign policy. But care has to be taken to prevent our actions from damaging our weakened economy in the process.

China’s expansion in the South China Sea is a military threat, but China’s geographic expansion is limited by Japan, Vietnam, and Taiwan. More dangerous is its economic aggression through its “Belt and Road Initiative” (BRI).

Since Xi Jinping began it in 2013, China’s BRI has taken the form of “debt trap diplomacy.” Making massive loans to entrap nations into accepting China’s military and economic presence, the BRI has been turning nations of Southwest Asia and Africa into Chinese tributary states. Pakistan is the best example.

By 2018, according to a Center for Strategic and International Studies report, Chinese BRI loans to Pakistan exceeded $62 billion, one-fifth of Pakistan’s GDP. Employing Pakistani and Chinese companies and labor to build roads across that nation, the BRI brings with it a major influx of Chinese citizens, all or almost all of whom are members of China’s People’s Liberation Army.

The same is true for China’s BRI projects in other nations. All of those nations risk Chinese domination as the price of the loans. The pandemic will make it less possible for nations to repay China’s loans, further increasing China’s ability to conquer them economically.

China is establishing several military bases in Pakistan, including a massive naval base near Gwadar at the mouth of the Gulf of Oman, through which Persian Gulf oil is shipped. By establishing the Gwadar base, China is positioning its navy to control much of the world’s oil supply.

China’s ability to make more BRI loans will be reduced but not ended. We cannot afford, and should not attempt, to outbid China for the allegiance of the BRI nations. In most of those nations our effort would be met with hostility for the same reason that China will find Pakistan difficult to control. The Islamist ideology will make Pakistan a very unreliable Chinese ally.

China and Russia both aspire to be more than regional powers, but their ambitions have been limited by the pandemic’s economic damage.

Chinese domination of Pakistan and African nations is a long-term threat that can only be answered by competing U.S. military presence in those regions. Our diplomatic and military planners and budgeters will have to include those regions in a concerted effort to restore a balance of power.

China and Russia both aspire to be more than regional powers, but their ambitions have been limited by the pandemic’s economic damage. They will be further limited by the rapidity at which our economy — and the economies of key allies such as Japan — recovers more quickly than theirs.

Trump is often accused of being an isolationist. His “America First” approach has not conformed to that concept. His engagement with China and failed attempt to reach a peace deal with North Korea have, for a brief time, defused some tensions. He should pursue broader trade agreements with the UK, Canada, New Zealand, Australia, and Japan energetically.

If Trump is not reelected, we must expect a Biden administration return to the Obama–Clinton formula of bashing our allies and negotiating bad deals with adversaries such as China, Russia, and Iran.

The reasoning behind that dangerous strategy was captured in a brilliant 2015 article by human rights activist Natan Sharansky, a hero of the Cold War and a former resident of the Soviet gulag.

The article, entitled “When did America forget that it’s America?” argued that in failing to require concessions from Iran in negotiating Obama’s nuclear weapons deal, America had deviated from its strategy of negotiation with the Soviet Union. Instead of requiring major concessions by Iran as a condition for negotiations, Sharansky wrote, we had abandoned our belief in the moral superiority of democracy over despotism.

There is no reason to believe that Biden’s beliefs in the superiority of our constitutional democracy are any different from Clinton’s or Obama’s.

If Biden is elected, America’s allies will, rightly, fear America’s abandonment of them. The result will, inevitably, be that “America First” will become “America Alone.”