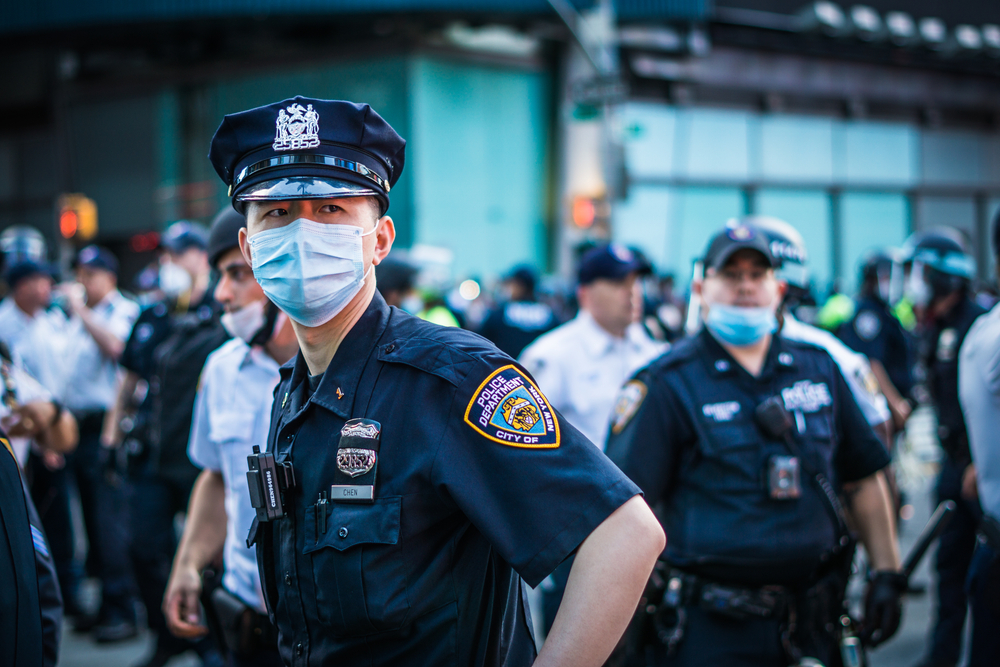 Just over one year after George Floyd’s death, Black Lives Matter (BLM) protests and anti-police rhetoric from Democrat politicians have led to a record number of police officer deaths and retirements. In 2020 alone, 264 police officers were killed in the line of duty, a staggering 96 percent increase from 2019.

New York City’s Police Department (NYPD), which has 34,500 uniformed officers and is the largest police force in the world, saw 2,600 cops retire last year, nearly double the number in 2019, and an 87 percent increase from the previous year. This after more than 400 NYPD police officers were injured in 2020 during anti-police protests. And in 2021, NYPD retirements are already set to surpass last year’s already high number.

As a consequence of Mayor Bill de Blasio’s senseless calls to strip $1 billion from the NYPD, as well as other policies that have handcuffed law enforcement officers from doing their job, the NYPD reported that murders in NYC rose to 462 in 2020, a 45 percent increase from 2019. The city also recorded 1,531 shootings in 2020, a 97 percent increase from 2019. De Blasio is now increasing funding to the NYPD.

Murder and other crime have soared in many Democrat-run cities that have slandered law enforcement as “systemically racist” and have also pushed to defund, or in some cases abolish, the police, as Rep. Rashida Tlaib called for last month. It’s no surprise that millions of Americans are fleeing blue states at unprecedented rates.

Nationally, murders have spiked by 25 percent, the highest level since 1995. More than 20,000 murders were committed in the U.S. last year, a 4,000 unit increase from 2019 and the largest single-year increase since the FBI began making the data publicly available in 1960.

In Portland, 117 officers have left the Police Bureau (PPB) since July 1 of last year, the highest total in at least 15 years. As of March 2021, 93 officer positions remained vacant, as well as 43 civilian positions. Crime is now up by an astounding 800 percent after Mayor Ted Wheeler cut $16 million from the PPB. Wheeler now appears to be regretting his decision and is asking for an additional $2 million in funding for the PPB.

In Minneapolis, the site of Floyd’s death, nearly 20 percent, or 120 of its 840 police officers, retired or took leaves of absence. Homicides are now up by a whopping 64 percent, and arrests by the Minneapolis Police Force (MPF) are down 42 percent. In other words, crime has increased dramatically while the MPF is being told to stand down.

In Chicago, the police force, which has 13,100 uniformed officers, saw 560 officers retire in 2020, resulting in a roughly 30 percent increase from the previous year. As a consequence, in 2020 the city recorded 774 murders, an increase of more than 50 percent from the 506 murders in 2019. During January through March of this year there were already 131 homicides, 584 shootings, and 706 shooting victims, all considerably higher numbers than during the same time period last year.

In Las Vegas, the police department saw retirements increase by 37 percent in 2020. This led to an 110 percent increase in homicides in 2021 compared to the same period last year.

And Seattle saw its highest homicide number in 26 years. Seattle’s police chief abruptly resigned last August after the BLM protests overwhelmed her city. Seattle also had 52 homicides in 2020 compared to 35 in 2019, an increase of 48 percent.

In Atlanta, 192 officers retired, resigned, or were terminated in 2020. During one three-month span following the Floyd protests between June 1 and Aug. 21, 42 officers resigned, twice the number of officers who left the department in the first three months of the year. And homicides in Atlanta rose by 58 percent, from 99 in 2019 to 157 in 2020.

In Milwaukee, there was a 120 percent increase in murders from Jan. 1 to Aug. 13 compared with the same time frame in 2019. This after the mayor called to cut police salaries by $8.5 million and sought to eliminate 120 law enforcement positions.

In Los Angeles, after the LA City Council voted to cut funding to the Los Angeles Police Department (LAPD) last year by $150 million, homicides are up 51 percent, and arrests are down 33 percent.

And in Philadelphia, the city of brotherly love saw a 30-year high with 500 homicides in 2020. There have already been more than 100 in 2021. This after the radical district attorney decided to drop 50 percent of both drug and illegal gun cases. The Philadelphia Police Department (PPD) has also reduced vehicle and pedestrian stops by 72 percent. To make matters worse, the PPD is facing a police shortage.

It’s no surprise that no one seems to want to be a cop these days. In Illinois, the Peoria County Sheriff’s Office is now offering a $10,000 sign-on bonus for patrol officers, and a recent police agency survey reported a 63 percent decrease in police job applications.

The numbers could not be clearer. Calls to defund the police promoted by BLM and its fellow travelers and irresponsible rhetoric by Democrat politicians against law enforcement have made our country, and particularly our inner cities, a lot less safe.

It is time for our leaders to find the courage to condemn senseless attacks against law enforcement officers and to support the men and women who stand on the thin blue line to keep our country safe each and every day.