by Itxu Díaz
Vladimir Putin and the Bolshoi Opera's Elena Obraztsova in 2000. (From the website of the President of the Russian Federation (www.kremlin.ru/Creative Commons) 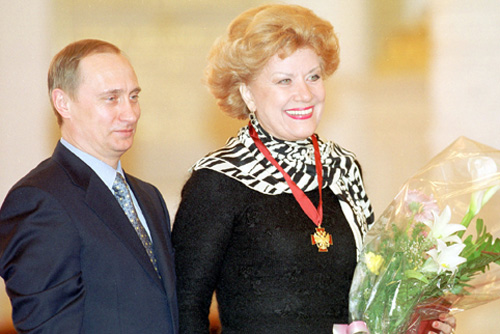 Putin is the kind of guy who every morning drinks a warm mug of Napalm for breakfast. Biden is the kind of man who still sleeps cuddling his teddy bear. If you are in a hurry, that’s all you need to know about the coming war in Ukraine. Besides, there will be no war, unless Putin proves himself even more insane than he has shown himself to be thus far, and Biden is capable of displaying even more incompetence than ever before. It seems quite impossible that they will be able to better their own records, but, to be honest, I wouldn’t bet my life on it either. Every time I stick my neck out for a politician, I end up in the hospital having to get my head stitched back on; in fact, for a while now, I’ve been writing my columns quite headlessly.

Russia has never ceased to be the Soviet Union for the little Tsar. He cannot stand that the ex-Soviet republics do not behave like obedient daughters to the Kremlin, turning up later and later for dinner, half-drunk, and talking back to daddy. To spite their patriarch, they are now drawing closer to the EU and NATO. Naturally, Russia dreams of invading Ukraine and stirring memories among the Russian populace of more glorious times, helping them forget just how miserable their lives are today.

I suspect no one has told Biden that relying on the Europeans in a war is like facing a nuclear submarine bare-chested, armed with a harpoon and diving goggles. To the disgrace of the Europeans, the EU is Germany, and a little bit of France. And Germany is Europe’s greatest traitor. They have been making cheap deals with Russia for centuries because all they care about is that the Russians don’t raise the price of gas. So there is no chance that Germany will support or participate in any military action. The same is true of France, which has also become the most cowardly nation in the entire European Union.

That is why Brussels rules out any military response, keeping to usual threats of economic sanctions. Every time Putin hears the word “sanctions” from Brussels, he drinks a shot of vodka, and sends an extra two thousand military vehicles to the border. Maybe that’s why this week he is completely drunk and in a surprisingly good mood; let’s not forget that, remarkably, he is a man who suffers from loud fits of laughter when the situation is propitious.

Putin responds to every EU sanction, a few weeks later, by driving up the price of energy in half of Europe. So it is most likely that the escalation in Ukraine will end with me, a humble Spanish writer, having to write by candlelight, without heating, because at the moment energy in Spain — thanks to those talented socialists — is as expensive as diamonds, and I do not see how it can get even more expensive: we are talking about a 75 percent increase in the price of electricity compared to 2020. Ahh (sigh), socialism.…

But back to the war, and after stating that relying on the EU for unanimous action is a practical joke, I never cease to be amazed at Joe Biden’s ability to make seemingly easy things complicated. The other day it was simple: it was enough to say that if there is an invasion, there will be a response. But no. So wonderfully exotic is his incompetence that, instead of sending a deterrent, he was able to invite Putin to invade just a little bit, and to further reveal that if it’s done without making too much noise, it will be impossible for NATO to agree on a response other than … sanctions. It is possible that, between Brussels and the White House, Putin is having the most amusing week of his life.

The only good thing for Biden is that he can count on Spain. This is a country where, if there is a war and the government is rightwing, going to fight is wrong and fascist. But if there is a leftist government, going to fight is democratic and pacifist. It doesn’t matter that it’s the same war. That is why the Spanish government today immediately sent two of its warships to the Black Sea and offered fighters to NATO. I admire the patience of our soldiers who, under the orders of a Government that despises them, are already on the front line of a war that has not yet begun, and of which no one is in a particular hurry to partake.

Biden’s incompetence is suddenly not so funny when I think that it is indeed 2022 and we still need a United States to lead a strong, freedom-fighting NATO, willing to go to war if necessary. Europe, at least, needs it, once again. So, as I stop laughing, Donald Trump comes to mind, how he would have managed this crisis, and, yes, we miss him. Biden’s incompetence is not only a disaster for America, it is a threat to the entire free world, and will undoubtedly cost lives.