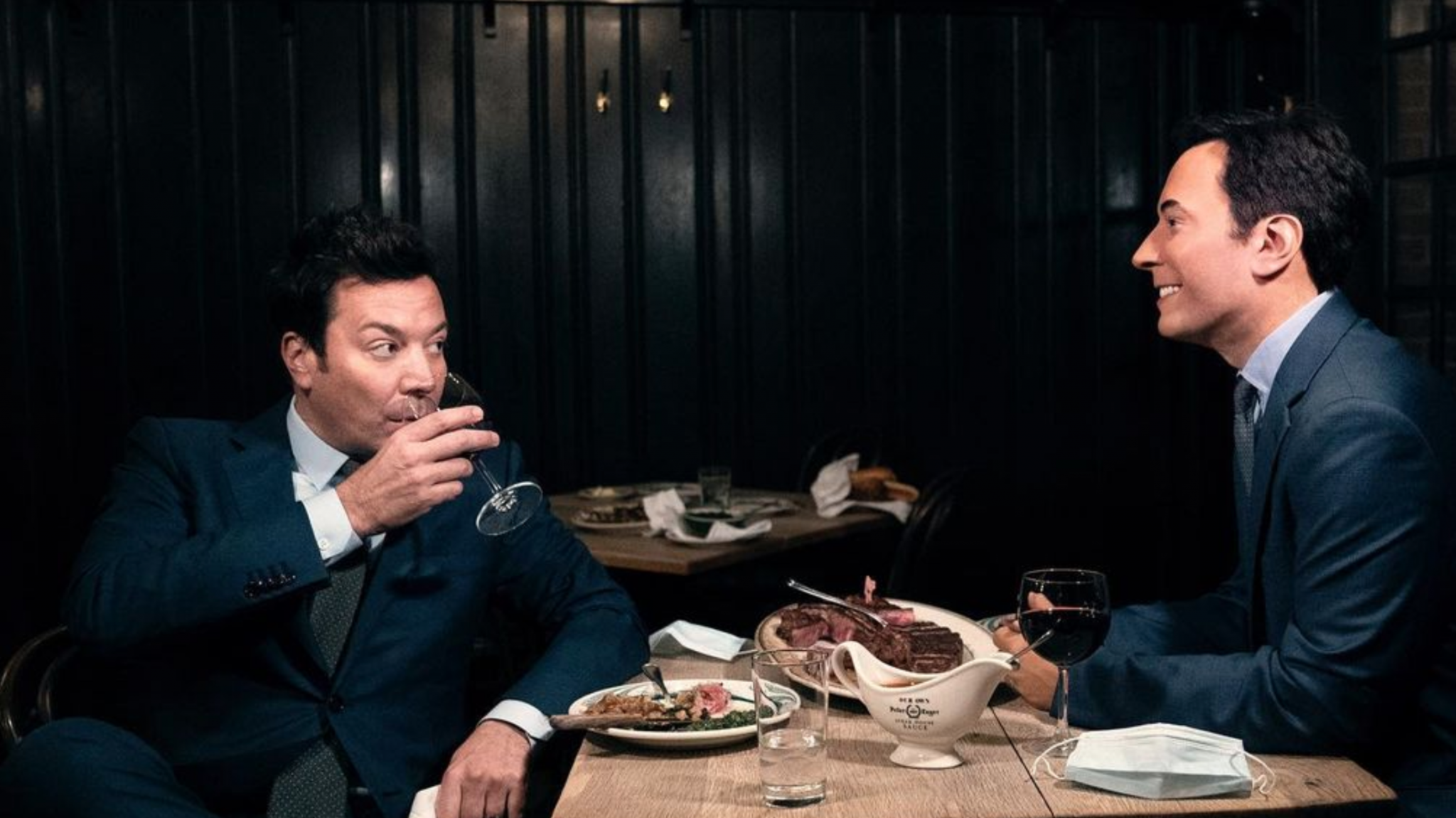 New York — I am seated one table over from Jimmy Fallon at Brooklyn’s famous Peter Luger Steak House. The late-night host’s waxen face appears to be frozen in a permanent television smile. His feet levitate an uncomfortable inch off the floor. I hear he hasn’t moved in days.

One of Luger’s bowtie-clad waiters approaches Fallon and ruffles his hair. The gesture reminds me of the 2016 incident when Fallon infamously messed up Donald Trump’s mane. The waiter then looks down at Fallon’s receipt, moving aside the restaurant’s trademark chocolate coins to read his order. It’s nothing but scribbles.

I call the waiter to my table. Choosing my words carefully, I ask if he finds Fallon creepy.

“Creepy?” The waiter replies. “Of course he’s creepy. The first time I saw him in here, I said, ‘What the hell is this thing?’ Thank God he’s only here until Tuesday.”

Fallon is not the only celebrity who is haunting the city’s hoariest steakhouse. Mad Men star Jon Hamm stands guard at the bar. Newsman Al Roker covers the stairs. And the late Audrey Hepburn stares down a martini that she will never drink. They’re part of a joint gimmick organized by Peter Luger and Madame Tussauds to celebrate an expansion of limited indoor dining.

COVID-weary New Yorkers love it. From my perch, I watch for nearly two hours as people stream in to take selfies with the fake stars. One young woman leans into Fallon’s face for a kiss. (“Like we’re on a date,” she tells a friend.) My waiter prevents her.

Another woman, masked and wearing surgical gloves, photographs every inch of Fallon’s body — from his sculpted eyebrows and manicured nails right down to the real Allen Edmonds Oxfords slipped onto his fake feet. She catches me staring and giggles: “Spooky, isn’t it?”

Our silent, motionless companion doesn’t make for a pleasant dining experience. All around, people picking at their unevenly cooked porterhouse steaks shoot furtive glances at Fallon, as if expecting him to stand up. By the bar, people waiting to pay their bills instinctively give Hamm the state-mandated six feet of personal space. Outside, passersby make the scene even more awkward by pressing their faces against the windows to gawk.

Peter Luger and Madame Tussauds claim that they placed these pseudo-stars here to make the restaurant feel less socially distant. But they have achieved the opposite effect. Nearly everyone I speak to tells me that the mannequins are off-putting, somehow anxiety-inducing. These reactions are unsurprising: no place ever feels so empty as when it is filled with nearly human figures.

Restaurants in other parts of the country have tried similar gimmicks as they work within pandemic gathering restrictions. A Washington, D.C., joint last summer filled its empty tables with department store mannequins. A Detroit pizzeria did the same with ghosts. These tricks never work. Instead of making diners feel more comfortable, mannequin set-ups remind people that the pandemic era is an inescapable farce.

The other day the real Jimmy Fallon dropped into Peter Luger to pay his respects. The comedian yucked it up with his wax likeness, which I’m sure was good press for himself, the restaurant, and Madame Tussauds. It was an eerie spectacle, the stuff of Charlie Kaufman. A more ambitious columnist could probably draw some high-concept conclusions from it — a thinkpiece about the blurred line between absolute unreality and reality itself. I can only note the sad fact that Fallon ate dinner alone.

As I leave the restaurant, I pass my waiter who is explaining the fake Fallon’s presence to a patron several martinis deep into his day. He points out that Peter Luger is already a tourist trap in normal times; tossing up some fake celebrities was as good an idea as any to draw in a pandemic-era crowd. This is New York, anyway. People will always show up to see something bizarre.