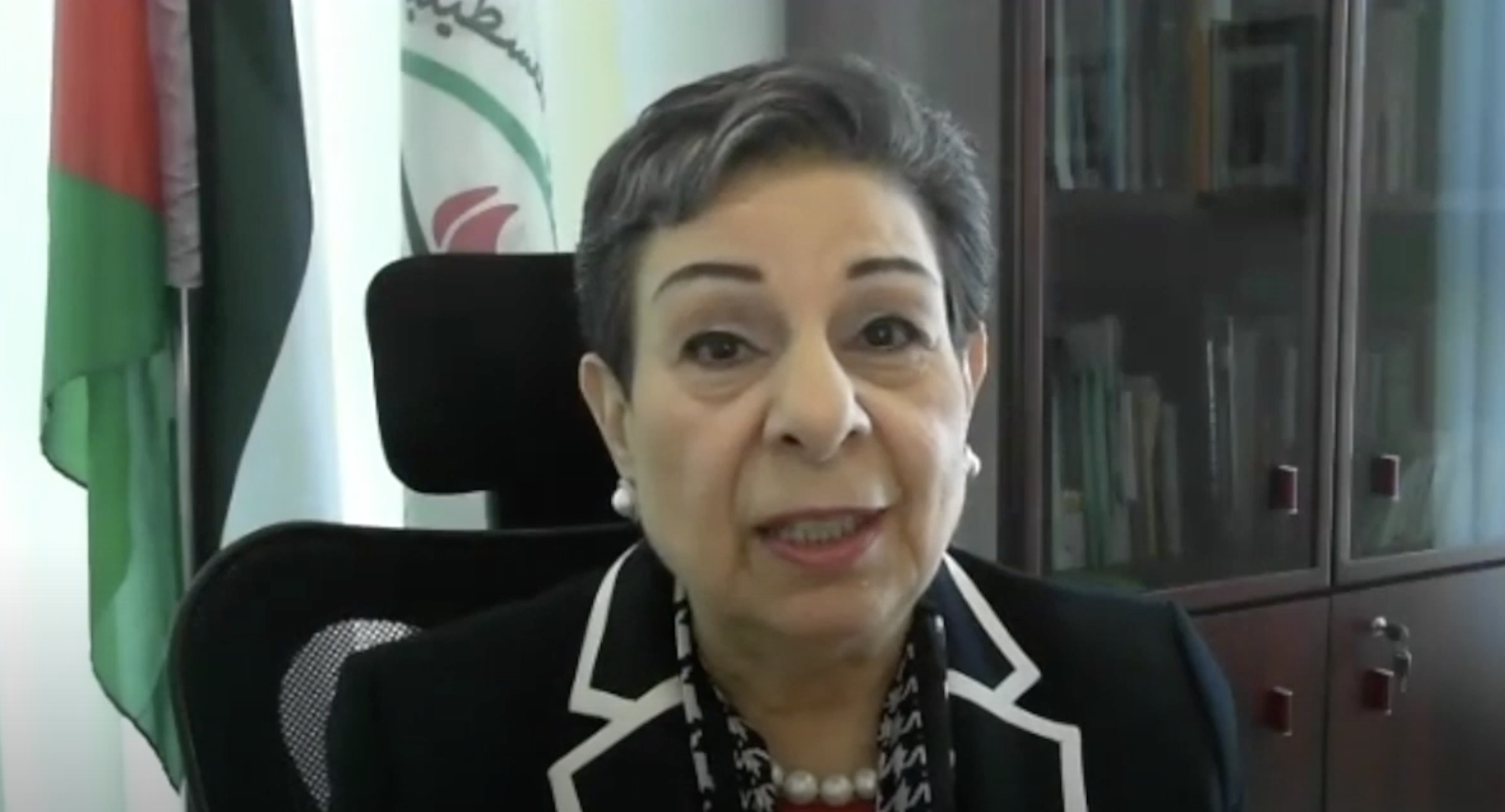 When the coronavirus restrictions prevented Middle East Studies academics from getting together in groups, they took their support for Palestine online. BDS organizations have been sucking up bandwidth for many months, pursuing their academic boycotts of Israel, comparing it to Apartheid South Africa, and decrying the evils of its colonial settlers. Former PLO man and current Columbia University professor Rashid Khalidi has been hawking his latest book all summer long. Popular Front for the Liberation of Palestine hijacker and hostage-taker Leila Khaled was ready to Zoom in to be feted by San Francisco State University on Wednesday when a protest at the tech company’s San Jose, California, headquarters, and a threat to launch federal investigations by Rep. Doug Lamborn (R-Colo.) changed those plans.

The biggest Palestinian festival-cum-conference of all would have been held the last weekend in March at New York University, but it was cancelled by the coronavirus shutdown. I refer to the Palestine Writes Literature Festival, billed as the greatest, most important convocation of Palestinophiles in and beyond the academic world.

The promotional material for Palestine Writes suggested that it was really going to be all about exaggeration, distortion, and advocacy for violence.

Most literary conferences are dull affairs that appeal almost exclusively to the intellectually cloistered devotees of literary and cultural studies (but rarely to their spouses). A “well-attended” panel discussion might consist of a dozen people, most of whom are participants or students. An audience of 100 would constitute a crowd. But Palestine Writes promised something different — an attempt to showcase the greatest, big-name writers of fiction, poetry, and other kinds of “creative” writing who specialize in clever anti-Israel propaganda and nuanced promotion of violence. It even had celebrities and promised special surprise guests, all of whom are “devoted to the belief that art challenges repression.”

There is ample precedent for the weaponization of literature, perhaps the best example occurring in England after the French Revolution, when British radicals, known as Jacobins, sympathetic to France’s “new principles,” were targeted by George III’s government. The London Corresponding Society was shut down in order to keep dangerous ideas from crossing the channel. Prime Minister William Pitt the Younger and Lord Grenville issued the Gagging Acts of 1795 to silence dissenters. But resilient thinkers found ways around the new laws. John Thelwall began lecturing on ancient history, stealthily substituting long-dead figures for modern ones (Caesar = George III, and so on), permitting a coded, roman à clef dissemination of his political agenda.

Following Virgil’s lead (The Eclogues) of masking instruction with entertainment, radical English authors disguised their political messages, especially in previously non-political genres such as the ballad and what one pro-government journal (The Anti-Jacobin) called “the heavy artillery of the didactic poem.” But unlike 18th-century British authors, who worked covertly, today’s “anti-Zionists” feel less compelled to hide their messages in furtive allusions.

So what are the Palestine Writes writers up to? Their promoters called the gathering a festival convened to “bring together writers, artists, publishers, and scholars to hold conversations about art, literature, and the intersections between culture, struggle, and politics.” The conference press kit and other pre-cancellation promotional material suggest that it was really going to be all about exaggeration, distortion, and advocacy for violence.

Exaggeration can be seen in the patently absurd notion of celebrating the “long tradition of Palestinian contribution to the world of arts.” This is pure fantasy. The most famous Palestinian museum is a recreation of the Sbarro Pizzeria attacked by a suicide bomber on August 9, 2001, killing 15 and injuring 130. The killer, posing as a musician, carried his concoction of explosives, screws, and nails in a guitar case. The “museum,” curated by the professors at An-Najah University in Nablus, employed artisans to recreate realistic models of dismembered body parts and pizza slices to adorn the ghoulish display. The museum’s motto was “Qassami Pizza is more delicious” — “Qassami” being a reference to Hamas’ Qassam Brigades, specialists in suicide terror.

Another Palestinian museum, cleverly named The Palestinian Museum, opened in 2016 in Birzeit with no art and no exhibits, its claim to greatness as empty as its galleries. Perhaps someone there should duct tape a banana to a wall. Were it not for a British charity called the “Welfare Association,” The Palestinian Museum would not exist at all.

The Palestine Writes promoters also exaggerate the importance of the conference participants, claiming that their festival “will feature some of the most prominent Palestinian writers in the world, alongside their peers in Black and Indigenous America.” Yet the most famous names on the list of participants aren’t Palestinian at all. The only names that most people would recognize are Alice Walker, whose hatred of Israel has outlasted her literary skills, and former Communist Party member and longtime anti-Semite Angela Davis. The only “famous” Palestinian participant is neither a scholar nor an artist, but the PLO’s Hanan Ashrawi. Had the conference not been cancelled, Ashrawi would probably have been the only one participating online, since she has been denied a visa to enter the United States. But now that everyone is Zooming, she could have participated just like everyone else.

Distortion is at the core of the festival’s celebration of “the intersections between culture, struggle and politics,” which is obvious in its version of history. “Since 2007,” the press kit announces, “the Palestine Literature Festival has been held throughout Palestine, in cities like Haifa, Akka … Jerusalem … and more.” To start, there is no country called “Palestine” because the Arabs who inhabited the UN Palestine Mandate have rejected every opportunity to create one that didn’t also wipe out Israel, a country that does in fact exist. Furthermore, Haifa is a city in Israel, as is “Akka” (the Arabic spelling of Acre), as is Jerusalem, capital of the Jewish state.

The Palestinian obsession with weaponizing art was made clear on September 14, when Palestinian Islamic Jihad official Khaled Al-Batsh described his group’s “comprehensive resistance” to an interviewer on Lebanon’s Mayadeen TV: “It begins with rocks, the pen, songs, and poems, followed by rocks, knives, guns, and rockets.”

Similar to the 18th-century British writers’ coded secrecy, the conference’s advocacy for violence is coded, presumably because openly advocating violence is still frowned upon at NYU, or at least it was in the before time when the festival was planned. But it is not so difficult to understand.

Consider the conference’s promotional logo, which employs a device not unlike Danish psychologist Edgar John Rubin’s “two face–one vase” Gestalt drawing, in which interpretation is influenced by perspective.

Linguistically, the homonym “rights” is suggested in the name, as in “Palestinian rights” and “the right of return.” Graphically, the logo depicts simultaneously the nib of a fountain pen and a kite.

Taken together, the image and text suggest “writing/writes” with the pen, and violence or “resistance” with the kite, a child’s toy that has become synonymous with violence, especially at the Gaza border in what I call Hamas’s “kite jihad.” If the festival goes forward one day, the planners might consider updating the image to feature a balloon — the latest toy conscripted to violence.

The sly iconography also plays on the cliché (from Edward Bulwer-Lytton’s 1839 drama Richelieu) that “the pen is mightier than the sword.” Bulwer-Lytton’s phrase is an example of metonymy, where “pen” stands for “written word.” The pen/kite image is an example of visual metonymy, where the fountain pen simultaneously stands for written word and kite stands for violence, murder, and terror. It is a cynical exercise of revolutionary poetics, a call for violence encoded just enough to be recognizable to insiders, while still providing a quasi-plausible deniability (“a kite is just a kite”).

The Palestine Writes website identifies the logo as the work of “Laila Abdulrazzaq.” Embedded in the name is a link to the Maamoul Press, where one of  co-founding artists is “Leila Abdelrazaq,” the spelling she uses to take credit for creating the image at the website lalaleila.com. There the kite is described as “a symbol of Palestinian creative resistance and life.” This is the Palestinian artist adored by The Electronic Intifada but not by the Canary Mission, which quotes her July 26, 2014, Twitter account as follows: “Don’t try and use my art to try and argue that the only legitimate form of resistance is a nonviolent one.”

Leila Khaled’s abrupt cancellation should have been an easy call because, as Rep. Lamborn put it, “she’s an unrepentant terrorist who continues to boast about her terrorist acts.” Yet it took a global pandemic to cancel the Palestine Writes Literary Festival. Decent people at Zoom objected to their work and technology being hijacked by an accomplished hijacker, but NYU was willing to stamp its imprimatur on this lollapalooza of anti-Zionism and anti-Semitism.

New York University has embraced “the intersection between culture, struggle, and politics.” In fact, NYU has enlisted five of its departments, two programs, one institute, one initiative, two student clubs, and the Hagop Kevorkian Center for Near Eastern Studies, to dress up the Palestinian “struggle” with the trappings of culture and confer upon it an illusion of legitimate political discourse. All this while sitting on top of a $4.3 billion endowment, receiving Title VI funding, and charging $54,000 a year for tuition (and another $19,000 to live on campus).

After I wrote about NYU’s bid to become the Gaza of Greenwich Village in a previous article at The American Spectator, I heard from a number of alumni who contacted the administration, which is aware that NYU’s anti-Israel activism is finally receiving some scrutiny. Perhaps a concerted effort could get the Palestine Writes Literary Festival permanently cancelled and forever banned from NYU. Tell NYU’s president if you agree: andrew.hamilton@nyu.edu.

A.J. Caschetta is a principal lecturer at the Rochester Institute of Technology and a fellow at Campus Watch, a project of the Middle East Forum, where he is a Ginsburg-Milstein fellow.