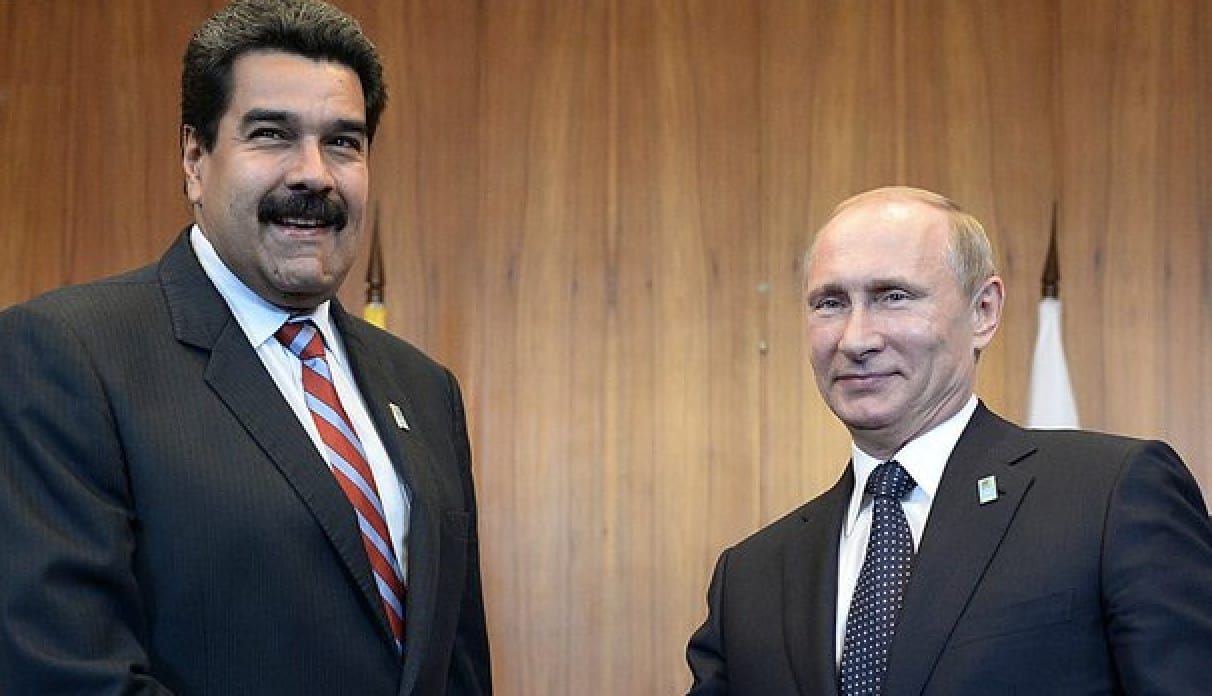 Russia, Iran, and Cuba all have a lot invested in Maduro. China is getting into the act as well, lending the Maduro regime money to stay afloat.

Three U.S. Air Force C-17s have flown to Colombia with food and medical supplies to aid starving Venezuelans, but — so far — Maduro is blocking any aid shipments.

President Trump — through National Security Adviser John Bolton — has repeatedly said that all options are on the table with regard to ridding Venezuela of Maduro, hinting at American military action.

Last week, Maduro’s government announced a “UN coalition” to defend its sovereignty against foreign intervention. The coalition is made up of about a dozen of the usual suspects including Russia, China, Iran, Syria, North Korea, Nicaragua, and Cuba

On Wednesday, Elliott Abrams, President Trump’s special envoy for Venezuela, tried to impress upon the House Foreign Relations Committee that mounting domestic and international pressure will soon drive Maduro out of power. He said that there was a “storm brewing” within Maduro’s inner circle.

Unfortunately, “soon” is a relative term. Last month, the Trump administration recognized Venezuela’s opposition leader, Juan Guaidó, as the legitimate president of the nation. Many South American governments, and some in Europe, quickly did the same.

Trump has imposed several economic sanctions on Venezuela starting with a freeze on the revenue derived from gasoline sales by Citgo, the Venezuelan-controlled company, here in the U.S. The frozen funds are being made available to Guaidó and denied to Maduro.

Nevertheless, more is going to have to be done to oust Maduro. Some of the prospects are delightfully underhanded.

The simplest would be for the CIA to offer Maduro a large chunk of money to retire to someplace where he’d be welcome. Maduro has to know that a similar ploy was tried in 2002 to lever Saddam Hussein out of Iraq and that Saddam refused to accept the offer. And Maduro has to know how that worked for Saddam so, at some point, he could accept the offer.

Drinking mai tais on a beach in Cuba or quaffing vodka in a Russian dacha on the Black Sea has to sound better than dangling from a rope in Caracas.

But to pursue that course would require a level of judgment that Maduro lacks. He probably feels secure with his Russian mercs and IRGC troops around him. He’s not smart enough to avail himself of a good bribe in time to avoid other, less attractive, options.

We’re not going to assassinate Maduro. We are, thankfully, out of that business since Ronald Reagan signed Executive Order 12333, which has been re-issued by his successors. And — despite the “all options are on the table” rhetoric from the administration — we’re not going to invade Venezuela either.

As Elliott Abrams’s testimony implied, we are probably doing all we can to foment rebellion among Maduro’s cronies and the rest of the Venezuelan military. If there is a coup against Maduro, it’s possible that they could engineer his assassination.

That assassination would have to be accomplished with Russian and Iranian complicity which is not at all impossible to arrange, or for Russia and Iran to engineer it themselves. Were they to do so, whoever took power in Venezuela after Maduro’s death would be their stooge.

Precisely contrary to what Rep. Ilhan Omar (D-MN) tweeted recently, what is needed in Venezuela is a U.S.-backed coup. If we can obtain enough support from Maduro’s generals, we could effectuate a coup that would install Guaidó as Maduro’s replacement and drive Maduro out of the country.

But that, too, is tough to conceive of because the top military officers are drug traffickers. They share their profits with Maduro and aren’t likely to throw him out if their drug business will be destroyed. Russia, Iran, and Cuba surely have assured them that keeping Maduro in power will keep money flowing to them, supplemented with those nations’ own bribes.

That leaves the most likely — and most sanguinary — possibility of a real civil war to oust Maduro.

Guaidó has announced that he will bring the U.S. aid supplies into Venezuela on February 23 by an army of volunteers he is organizing. That announcement is an invitation to Maduro to use military force to block Guaidó’s volunteers.

That split — and the coming confrontation centering on the aid shipments — could bring about a civil war. In theory that could cause other South American nations to intervene. The history of South America is rife with wars of conquest by European powers and wars of independence from them, but a war between South American nations is an historical rarity. Even Colombia and Brazil, which border Venezuela and have absorbed the greatest numbers of Venezuelan refugees, will probably abstain from intervention.

That history, in all likelihood, leaves it to the Venezuelans to conduct their own revolution. If fighting erupts on Saturday or afterward, we could — and should — provide Guaidó’s forces with military equipment and funding for a nascent revolution. Any further intervention — even the military advisers we routinely send into such conflicts — would be condemned as a U.S. invasion and damage Guaido’s legitimacy.

In sum, although the next week could prove crucial in the effort to oust Maduro, it’s entirely likely that he will remain in power unless and until our economic sanctions have sufficient impact to persuade Maduro’s generals to help throw him — and his Russian and Iranian allies — out of the country.

Mr. Abrams’ prediction of Maduro’s ouster being “soon” is best understood as “sooner or later,” which won’t be soon enough to prevent Russia, Iran, and China from making Venezuela their permanent their home in South America.