The Nation’s Pulse Capitalism,Economic Growth,income taxes,Inflation Reduction Act,Progressives,Socialism Opposing Visions of We, the People - The American Spectator | USA News and Politics
Menu
The Nation’s Pulse
Opposing Visions of We, the People
In this election, can we draw the line on what we have become these last two years.
by Andrew B. Wilson
Joe Biden at the EU Summit on June 15, 2021 (Alexandros Michailidis/Shutterstock.com) 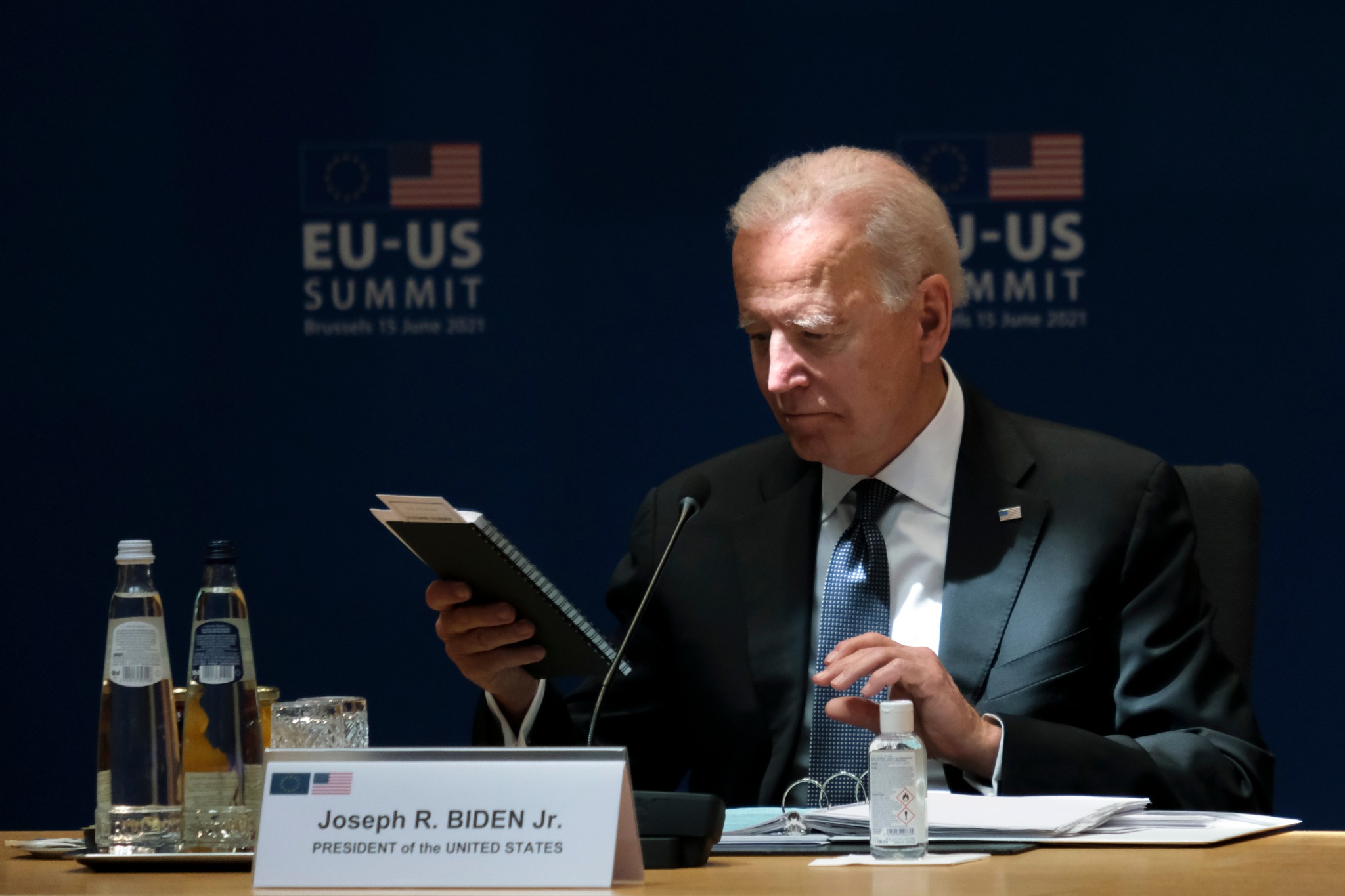 Over the past two years, the battle of ideas in public policy has widened in scope, intensified in fury, and escalated in consequence in our daily lives. The fight rages at all levels of government and all corners of society. It is a battle between two competing visions of the future.

One vision embodies a sense of confidence and continuity. It says: We know who we are and we know we can accomplish great things in a free society under limited government. It also says: We are a country where the rule of law prevails over the whims of rogue bureaucrats and starry-eyed or power-hungry public officials. The other vision begins with a dark and apocalyptic view of America’s past, present, and future. In calling for immediate, disruptive change, it seeks to “transform” the country into something it has never been before:

That is the “progressive” (read: far-left) vision of how to reform and redeem a deeply flawed America. But what happens when a new government, with no mandate for radical change, rushes to put that vision of the future into actual practice? As the last two calendar years have demonstrated, what happens is an ugly mess.

With one hand, the federal government artificially inflated demand by spraying borrowed money at every real and imagined problem. With the other, it throttled private-sector production — through higher taxes, increased regulation, and blocking further development of U.S. oil and gas fields. Add to that a vast expansion of the welfare state, coupled with the elimination or relaxation of work requirements for many recipients of government assistance. The end result of all this spendthrift policy-making is a malfunctioning, sputtering economy — the worst inflation in four decades, a bear market, and the collapse of what had been the beginning of a strong recovery with minimal inflation.

The Inflation Reduction Act, signed into law this August, will do nothing to reduce inflation or to re-ignite growth. To the contrary, this singularly misnamed piece of legislation doubles down on all of the same wrong-headed policies that have created the mess we are in today. The legislation imposes investment-killing tax hikes on manufacturing and it plunges ahead with even greater government spending to accelerate the willful and crazy descent into a zero-fossil-fuel-future based on unproven or nonexistent technologies.

In short, the so-called Inflation Reduction Act is the exact opposite of the pro-growth, low-tax strategy that U.S. economy desperately needs.

While the outcome of the battle between visions is perilously uncertain at the national level, my own state of Missouri can seize the initiative by championing free-market, limited government values to climb out of its own slow-growth torpor of the past two decades. By embracing the same commitment to freedom and equal opportunity that launched America into superpower status, lawmakers in Jefferson City should make my state a strong magnet for the many families and businesses across country that are looking for a place to move, put down roots, and thrive. To do so, we need a bold low-tax and pro-growth strategy for Missouri.

That approach is exactly what the fastest-growing states (led by Florida, Texas, and Tennessee) have done with great success. They keep their hands off workers’ paychecks by not taxing personal income — because income taxes are the most damaging of the three major taxes (income, property, and sales). The fastest-growing states know that prosperity requires production, and the best way to encourage work, investment, and enterprise is to stop penalizing them.

Missouri has been moving in the right direction, dropping from a 6.0 percent state tax on personal income in 2017 to 5.3 percent today. We need to move a lot faster. It now appears that both the executive branch and the General Assembly are ready to do that — cutting the tax to as low as 4.95 percent in 2023 with further decreases in years to follow that would bring it down to 4.5 percent. If so, that would be a real accomplishment — something that could put Missouri on a whole new trajectory over the next couple of decades and establish our state as a model for others to follow.

The progressive vision of the future is itself a deeply flawed creation — truly, an awful creation. It assumes a deeply flawed America and has no regard for free markets or the values of hard work and individual success. We need to wake up to the real and present danger to the well-being of my state and our country posed by such a vision. It is time to arrest the reckless and unsustainable growth of the public sector and instead unleash the proven power of free-market capitalism.

Andrew B. Wilson, a longtime contributor to The American Spectator, is senior writer and resident fellow at the Show-Me Institute, a free-market think tank based in St. Louis, Missouri.