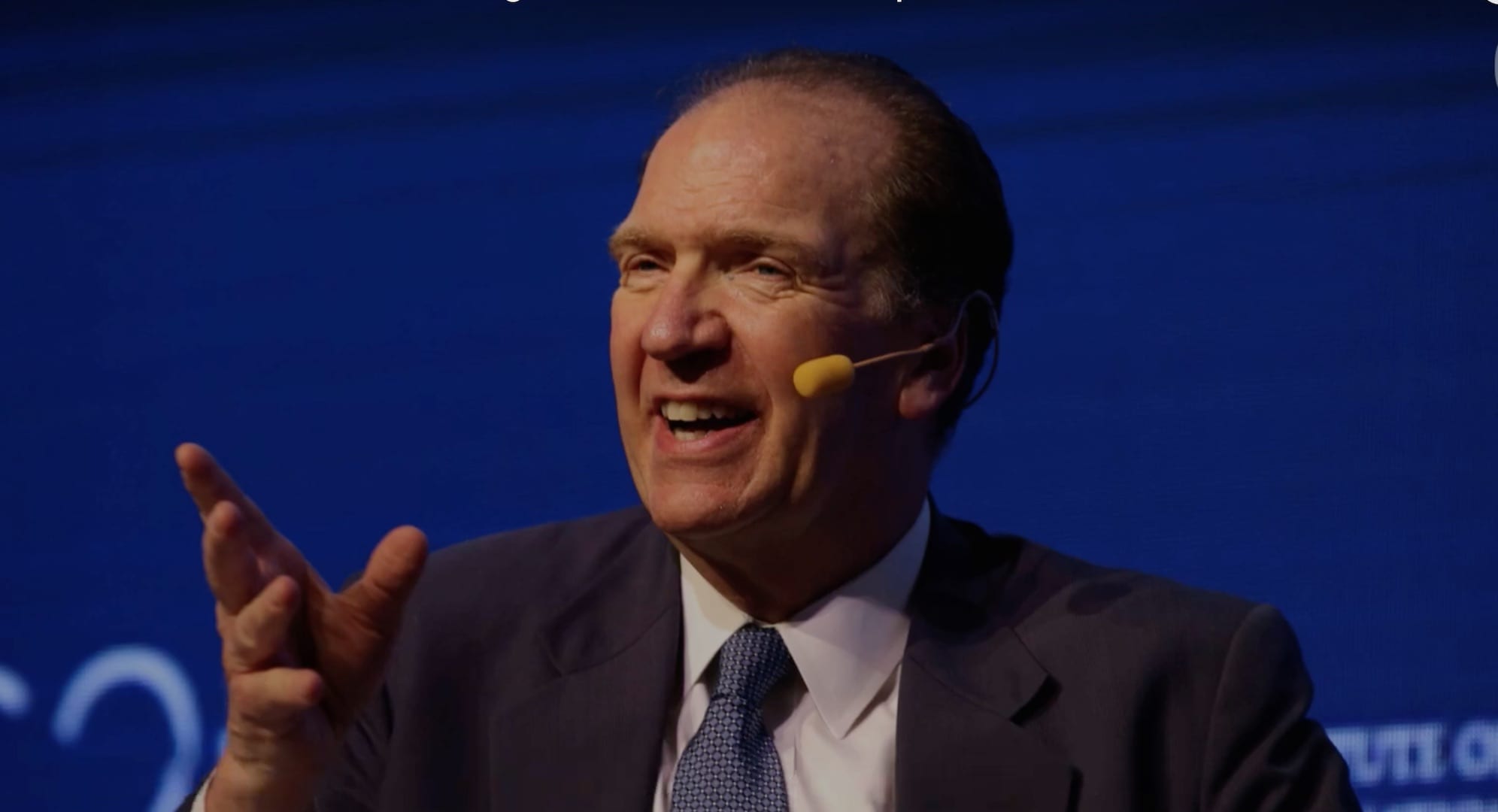 Malpass, currently undersecretary of Treasury for international affairs, is a longtime critic of the World Bank.

It was under Kim’s leadership that the World Bank announced in 2013 that it would no longer finance coal-fired power plants in developing countries but instead would look favorably on electrification projects employing renewable energy. Appointed to head the bank by President Obama the previous year, Kim enthusiastically embraced Obama’s anti-fossil fuel policies and carried them into the sphere of international lending.

Supported by a nearly $400 billion balance sheet, the bank, by denying funds to energy projects it deems at odds with “acceptable” climate goals, is in a position to do great harm. And by pushing intermittent wind and solar power in underdeveloped countries, it is doing just that.

In a 2017 report for the London-based Global Warming Policy Foundation, international investment analyst Rupert Darwall wrote that the World Bank was guilty of “an inhumane and senseless attempt to try and save the planet on the backs of the world’s poor.” He called on the bank to abandon “its damaging advocacy of renewable energy for countries that can ill afford the costs and risks of flawed technologies that rich countries have yet to solve.”

This is where Trump and Malpass come in. Trump has already broken with the global green establishment by pulling the U.S. out of the Paris climate accord and pledged to marshal America’s abundant resources of oil, coal, and natural gas to achieve “global energy dominance.”

Now, it’s time to take that agenda to the World Bank, where, by tradition, its head is an American citizen chosen by the U.S. president, subject to the approval of the bank’s board of executive directors. Conveniently, the bank’s posh headquarters is a couple of blocks from the White House.

The World Bank doesn’t operate in a vacuum. Its anti-fossil fuel policies fit neatly into the climate agenda pursued by the United Nations, the European Union, global corporations, environmental organizations, and a bevy of deep-pocketed foundations, hedge funds, and investment banks. The Houston-based Laura and John Arnold Foundation, for example, has teamed up with high-profile billionaires such as Bill Gates, Jeff Bezos, Michael Bloomberg, and Vinod Khosla to form Breakthrough Energy Ventures, an offshoot of Gates’ green-energy advocacy group, the Breakthrough Energy Coalition.

Launched in December 2016, a month after Trump’s election and a year after conclusion of the Paris climate accord, Breakthrough Energy Ventures pledged to invest $1 billion in “energy that doesn’t emit greenhouse gas to power the future.” The Arnold Foundation has also joined forces with the Hewlett Foundation, Packard Foundation, George Soros’s Foundation for an Open Society, and others, to fund the ClimateWorks Foundation. Described by the Capital Research Center’s Influence Watch as a “left-of-center ‘pass-through’ entity that distributes funds from donors to environmentalist activist groups around the world,” ClimateWorks funds groups that lobby for taxes on emissions, restricting coal use, international treaties with strict enforcement mechanisms, and diminishing the use of cars.

ClimateWorks’ activities haven’t always been welcomed in developing countries. In 2014, the government of India blacklisted ClimateWorks after that country’s Intelligence Bureau declared Greenpeace, a ClimateWorks grantee, “a threat to national security.” The government said that the anti-mining, anti-drilling, and anti-coal protests ClimateWorks and other Western environmental organizations funded had cost the country up to 3% of its GDP.

The Arnold Foundation’s anti-fossil-fuel stance is highly ironic considering that John Arnold, the organization’s co-chair, made a fortune as a natural-gas trader for Enron before the company’s collapse in 2001. Arnold escaped Enron’s demise financially and legally unscathed and, after years as a successful hedge fund manager, established the Arnold Foundation with his wife Laura in 2008.

His low-profile foundation has distributed over $1 billion in donations over the years, and some of that money has gone to combat the very industry that made John Arnold wealthy. In this, he resembles Tom Steyer, who rose to great wealth as one of the world’s largest financers of coal projects before becoming a climate activist and funder of anti-fossil fuel causes.

This is a glimpse into the world with which Trump’s energy goals must contend. As long as the World Bank is politically aligned with the likes of Tom Steyer, George Soros, John Arnold, and the billions of dollars they can pour into turning public opinion against fossil fuels and underwriting renewable energy projects, hundreds of millions of people around the globe will be denied access to grid-connected electricity they can count on and afford.

Having blacklisted coal in underdeveloped countries, there is nothing to keep a climate-obsessed World Bank from moving on to oil and natural gas. Nothing, that is, except Donald Trump and David Malpass.