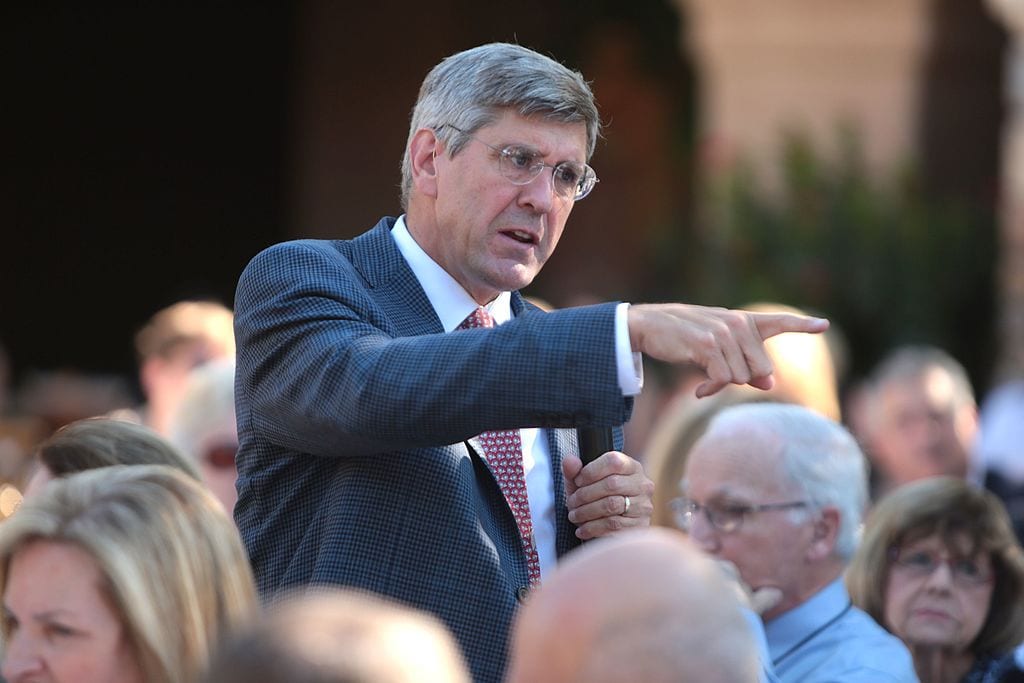 Steve Moore, one of the oracles of free market economics, is President Donald Trump’s choice for the Federal Reserve Board, and the long knives are out for him. Yet I am told by conservatives everywhere not to worry. He is a shoo-in.

It all reminds me of July 1, 1987 when President Ronald Reagan nominated Judge Robert Bork for an opening on the Supreme Court. He had it made in the shade, said my complacent conservative friends. The result was brutal. But we do not have to look back 32 years to see how unruly the leftwing mob can be. Recall the recent fate of Judge Brett Kavanaugh. Only his courage and unscotchable determinate saved him. The simple fact is that the conservatives are often slow on the draw against the American left. Only the Wall Street Journal and the intrepid New York Sun have come out swinging for Moore. It is time for the conservatives to rally around him. He can probably win with the President on his side. He apparently has the votes. Yet the coming battle would be a lot less bloody if the conservative movement were to take the field on Moore’s behalf — and make it clear that from now on they are going to wage war for the President’s nominees.

Defending Moore on economic grounds ought not to be that difficult. The Trump Administration is presiding over an economic boom that Moore has been calling for for years. With the President’s tax cuts and deregulation — two of Moore’s favorite panaceas for an anemic economy — we have historically low unemployment, certainly for blacks and for Latinos. Growth is now robust. It has actually outpaced predictions. Most economists predicted 2.5% growth for the first quarter. Friday we learned that the economy grew at 3.2%.

That is the first time since 2015 that the first quarter GDP topped 3%. Most economists were wrong. Moore and those like him were right on track. As Jeremy J. Siegel said in Monday’s Wall Street Journal, “… somehow, though unemployment is at a 50-year low, inflation is still below the Fed’s 2% target.” He is the rare economist for Moore.

Yet the New York Times, the Washington Post, and CNN are opposed to Moore. Of course they are also opposed to Trump. When Trump came into office they predicted a world-wide recession of great severity.

Allow me to quote one of mainstream media’s economic gurus. A certified economist, a winner of the Nobel Prize for economics, Paul Krugman, Ph.D. On November 9, 2016 he greeted Trump’s election with this dirge: “Under any circumstances, putting an irresponsible, ignorant man who takes his advice from all the wrong people [Moore!] in charge of the nation with the world’s most important economy would be very bad news.” And he persisted, “What makes it especially bad right now, however, it the fundamentally fragile state much of the world is still in.” Finally he concluded, “So we are very probably looking at a global recession, with no end in sight.” Clearly having made hysterical pronunciations such as the above Guru Krugman could not see Friday’s growth rate of 3.2%.

So now the long knives cannot share Professor Doktor Krugman’s contempt for the Trump economy. How are they going to defame Steve Moore? They are going to get personal. They are going to Brett Kavanaugh him. As I have said, he is a “clever” writer and has been writing for more than 35 years. Because he is a lively fellow, he has naturally indulged in a little jocosity from time to time. Some fifteen years ago women athletes were a target for his wit and also women bartenders. Now because of the crime of joking about woman leaping in the air and standing behind a bar he is to be denied a role at the Fed, the assassins boast.

Well, I say to fellow conservatives, leap to Moore’s defense. And remember the example of Congressgirl Alexandria Ocasio-Cortez. She too was a bartender before the mainstream media made her the Lioness of the House of Representatives. Senator Jodi Ernst and Senator Lindsey Graham, do the decent thing and stand by our man!