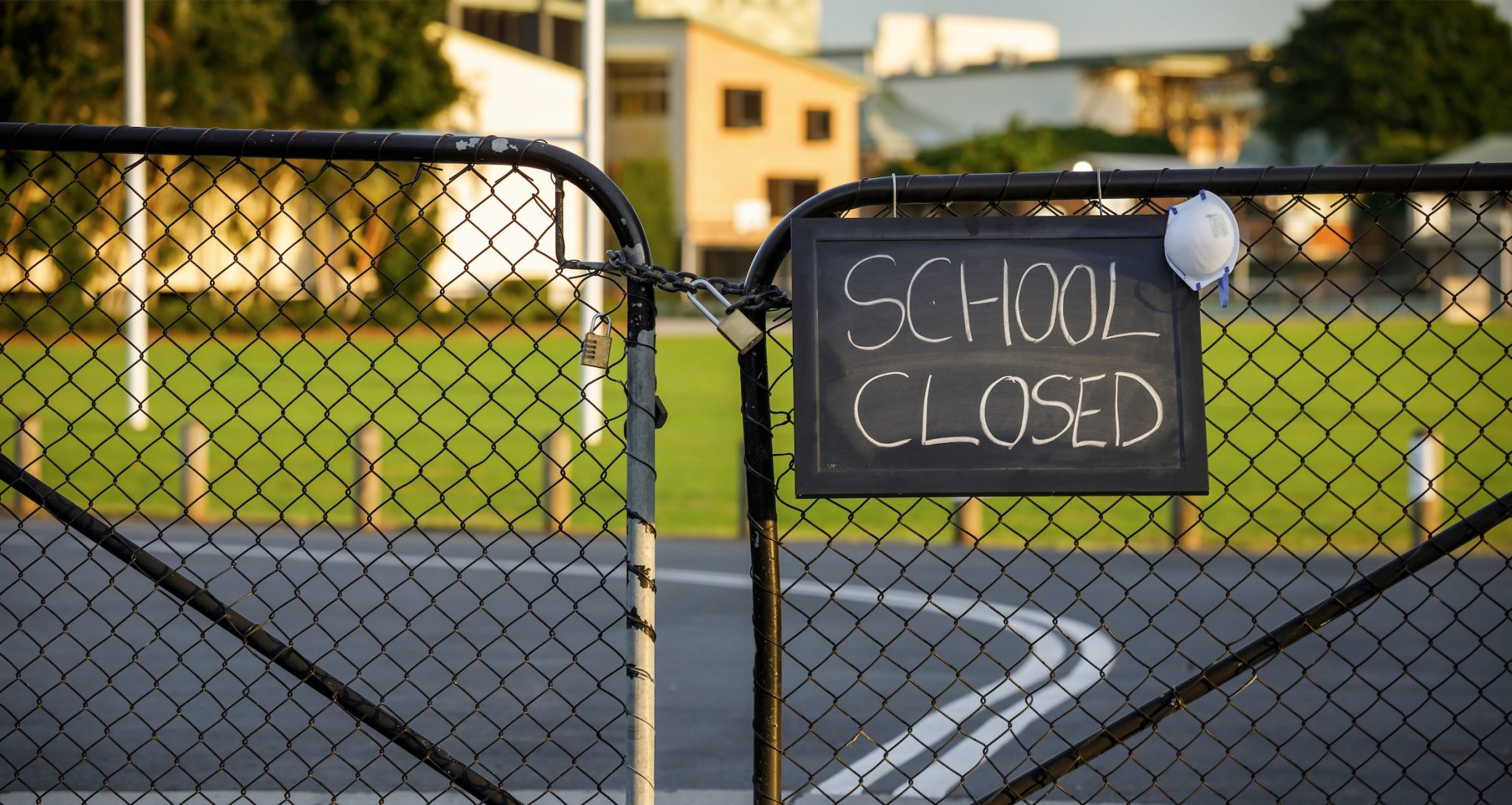 We’ll go ahead and borrow/steal one of the Left’s favorite obnoxious axioms and discuss the opportunity to slaughter a pair of their political sacred cows, because one thing the Wuhan coronavirus event has made clear is that American education as currently constituted won’t survive the new status quo.

Both major manifestations of the educational sector are unsustainable. K-12 public education and higher education are both about to be clobbered by the economic high winds let loose by the ChiCom plague. Republican leaders, particularly at the state level, should step forward and steer the inevitable changes to come.

Let’s start with K-12, because it’s a small rowboat in the storm of events that has already begun and will only intensify.

Understand that the changes in American life wrought by the virus, while certainly not all permanent, are inevitably significant, and they will make it impossible to fund and run public schools as they’ve been funded and run.

The funding aspect is very obvious with a small thought experiment.

How are public school districts across America funded? They catch a good deal of federal funding, but mostly it’s sales and property taxes at the local level, with state support in varying degrees supplementing their budgets.

Local sales and property taxes are about to take a massive dive virtually everywhere, and it’s going to be a long time before they recover. There are two main reasons for that.

First, numbers from March indicate what the stay-at-home orders that went out across the country did to the retail economy just over two weeks:

March retail sales fell 8.7%, a record drop, with the only sign of activity at grocery and beverage stores, which saw sales grow by 25.6%. Economists expected an 8% decline in monthly sales. The consumer accounts for 70% of the economy.

“The economy is clearly in ruins here,” said Chris Rupkey, chief financial economist at MUFG Union Bank. “Nobody is buying cars, down 25.6%, nobody is buying furniture, down 26.8%, and eating and drinking places were down 26.5%.”

But Ward McCarthy, chief financial economist at Jefferies, said the retail sales data muddies the outlook for first-quarter GDP, since some sales categories in the data used to calculate it actually improved. They include building materials, up 1.3%, and health and personal care, which climbed 4.3%.

“The bottom line is that consumer spending has fallen off a cliff after being relatively solid for a prolonged period of time,” according to McCarthy. “There has been significant substitutions in spending habits as consumers have tried to cope with social distancing. The consumer sector will provide a drag on Q1 and Q2, but it’s going to be difficult to estimate the size of the drag.”

March retail sales also showed barely a blip in online purchases, only up 3.1%, though consumers are shopping from home. The Commerce Department acknowledged it had difficulty collecting data as many businesses have shut down.

Yes, when the virus panic is over the economy will recover, and quite probably in robust fashion. But it won’t likely be a consumer-spending recovery — instead what’s more likely is that manufacturing, brought home as a function of our reckoning with China, will lead a surge in employment and drive the boom to come.

What’s more, consumer spending has likely changed to a significant extent in a way that will permanently injure local tax bases.

In the March retail numbers, the two worst performers were precisely what you’d expect — clothing and accessories fell off 50.5 percent, and furniture and home furnishings dropped 26.8 percent. Two things that clearly flow from those numbers are (1) both categories were already moving fairly quickly online, and (2) the trend reflected in both signals a death knell for department stores. Clothing, furniture, and appliances are what department stores sell.

Department stores are the anchor tenants of shopping malls all over the country. When department stores go, so do the malls. And when the malls go, there goes not only the local sales tax base but also a huge chunk of the commercial property tax base.

It’s worse than that, because a sizable chunk of the workforce who have shifted to home-officing and working from home will end up finding they can be just as productive in this new environment and also that they like it a lot better than the rat race of a long commute into town every morning. When the shutdown is over, they’ll express that preference. And lots of their bosses will agree. What does that do? It destroys the commercial office space market, and the property taxes coming out of that sector take a dive. Something else you might well see from all this home-officing is less traffic on the roads and less revenue from state and local fuel taxes.

Where is the money going to come from to fund school districts that spend $15,000–$20,000 per student per year on inconvenient, often dangerous, underperforming educational institutions populated by employees who provided Bernie Sanders with his largest donor base?

If you’re a Republican state legislator, now is the time to prepare the most aggressive school-choice push in American history, because when the changes the virus has wrought upon society and our economy begin to calcify it will no longer be possible to fund those overpriced public school systems. Something cheaper and more responsive to consumers is going to have to replace them, and the only way known to us to get there is school choice and voucher/scholarship/tax credit programs in which the money follows the student.

Not to mention that since the whole country is being exposed to home-schooling, it’s inevitable that lots of work-at-home parents will find a preference for that over public school attendance. Meaning those kids aren’t going back to those public schools, and lots of them will be half-empty. Which the school districts won’t be able to afford.

And if you think K-12 education is about to take a dive, wait until you see what this will do to higher education.

It was already very obvious that the higher ed bubble was about to break. You can’t subject a country to $1.6 trillion in student debt to pay for declining results in marketable skills and increasing levels of failing social engineering and not recognize it can’t continue. Before the virus came and wiped out tens of millions of jobs, employers were already complaining more and more loudly about the idiocy younger employees were subjecting them to — parents accompanying their kids to job interviews, demands for inclusion of exotic gender and sexuality choices, and the like. Now, when the shutdown is over, those employers will be able to pick through thousands of résumés to find a better pool of potential workers than they ever would have thought, and it’s inevitable the Fat Studies and Sociology majors with quarter-million-dollar student debt will be even more out in the cold than ever.

An inevitable outcome of this will be student debt relief, and the obvious way to do that would be to allow that debt to be discharged in bankruptcy. When that happens, all those useless degree programs will go away, and the college bureaucrats accompanying them will be gone, as well.

So will lots of private liberal arts colleges charging $50,000 per year in tuition for left-wing indoctrination and four years of drunken partying. And lots and lots of middling, directional public colleges are going to find themselves losing students to online degree programs and vocational schools, something that was already happening but has greatly accelerated in just a few weeks.

Republican state legislators interested in making legitimate and beneficial social change ought to recognize this and begin holding significant, existential hearings in Appropriations Committees across the country, dragging university administrators in and poring through their books to examine exactly what they need and what they don’t. Nobody has wanted to do that, but now is the time for it — because a whole lot of what those universities spend money on is absolutely unnecessary and a waste of taxpayer money that is no longer available.

And since the money to fund those middling public universities is likely to be greatly reduced, forcing them online in large measure is an inevitable outcome. There is no reason to hide from that, especially when the scarce resources doing so will unlock can be used on infrastructure projects and tax relief for squeezed citizens, which will become urgent priorities in legislative sessions to come.

Those winds are blowing. It’s time to raise the sail and travel to a new harbor. Republicans need to be the ones at the helm.