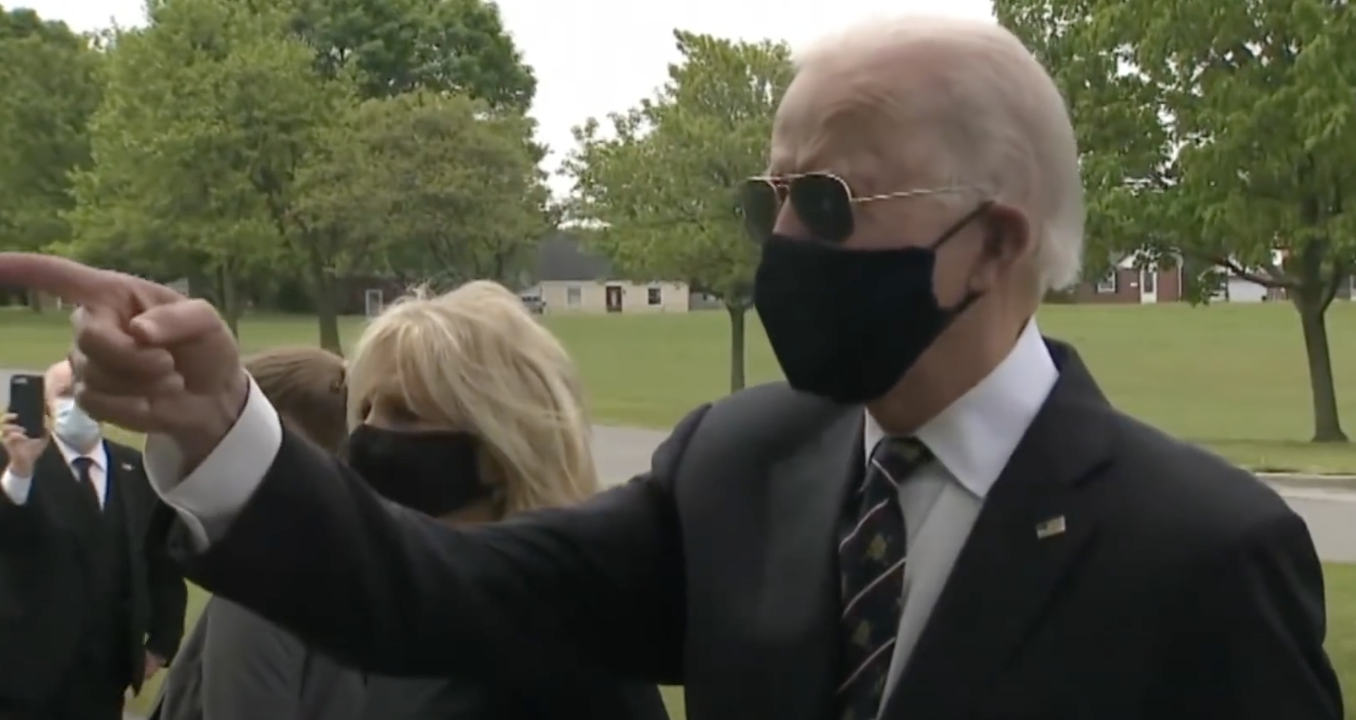 As with seemingly everything in today’s political climate, face masks have become a hot-button issue. Filtered through divergent ideological prisms, a rudimentary measure to help reduce the spread of COVID-19 has been alternately interpreted as either a surrender of freedom or a symbol of virtue. Hence the ubiquitous profile pictures of mask-clad faces on social media — somewhere along the line, the proverbial Twitter avatar apparently morphed into the literal embodiment of an individual’s self-image and moral worth.

Given that the scientific consensus outwardly shifted in a matter of weeks from discouraging to strongly recommending near-universal mask wear in public, perhaps facial coverings were bound to be controversial from the start. But in our federalist republic, at least one point should be incontrovertible: to the extent mask wear is mandated among the general public, doing so is the province of the states, not the federal government.

The president lacks the general authority to regulate citizens’ personal lives in the name of public health.

States, as residuary sovereigns that both predated and reserved broad powers under the U.S. Constitution, retain the primary responsibility to protect the health, safety, and welfare of their inhabitants. These state “police powers” are inherent, whereas federal authorities must be expressly enumerated in the Constitution. Even as the scope and size of the federal government have grown exponentially, the courts have resisted interpreting the constitutional Commerce Clause as the federal equivalent of the police power.

Whereas state governments may not violate the Constitution, their power does not emanate from it. Rather, it emerges organically from the basic functions of governance, as enshrined in the states’ own constitutions. As a result, much if not most of the daily affairs of public administration that affect citizens’ lives are controlled at the state and local levels. This is one of many reasons why the media’s (and hence America’s) obsession with the presidency is so misguided and inimical to our civic identity.

The mistaken, but seemingly prevalent, notion that the president possesses constitutional authority to issue a nationwide mask order is a case in point. Late last month, former vice president and presumptive Democratic presidential nominee Joe Biden told a local news reporter in Pittsburgh that as president, he “would insist that everybody in public be wearing that mask” and could do so “from an executive standpoint.” This call for a national mask order was seconded by some lawmakers. House Speaker Nancy Pelosi (D-Calif.) went so far as to claim that the Centers for Disease Control and Prevention (CDC) were recommending, rather than requiring, mask wear only “because they don’t want to offend the president.”

Actually, it’s because the CDC’s regulatory authority is quite limited and typically secondary to states except in cases of international and interstate travel. Even where the CDC has isolation and quarantine authority for specific communicable diseases, it has historically been reluctant to use it in deference to state prerogatives. By statute, the CDC’s public health authorities do not ordinarily preempt state law, and the agency’s regulatory authorization to take certain “measures in the event of inadequate local control” has never truly been put to the test. Thus, CDC expertise is most often couched in advisory terms, as guidance or recommendations to certain industries and health-care workers. The CDC is a national resource, not a national police force.

The seminal case in U.S. public health jurisprudence centered on the power of states, not the federal government, to compel vaccinations. Regardless of political persuasion, governors tend to jealously guard their sovereign turf, which made it all the more bizarre when New York Gov. Andrew Cuomo recently exhorted President Donald Trump “to sign an executive order directing everyone to wear a mask.” Cuomo further advised that “the president doesn’t have to pass a piece of legislation, doesn’t have to call the Congress, just sign an executive order saying wear a mask.” Leaving aside the pesky issue of separation of powers, what was most striking is that Cuomo’s rationale was that he had done the same as governor. Left unmentioned was that compulsory mask wear is a quintessential police power to regulate individual conduct for the professed benefit of society. As far as that authority resides anywhere, it’s squarely with the states.

Isn’t that why President Trump took considerable flak this spring for claiming “the federal government has absolute power” to decide when states lift their lockdown orders? The assertion was unsound, even if the White House to its credit never acted on it. Ironically, just a week after telling the president to order mask usage, Gov. Cuomo was unwilling to similarly abdicate authority on school closures. “School re-openings are a state decision, period,” the governor asserted. “There is something called the Constitution that guides government power.… And the President does not have the authority to open schools.” Under Cuomo’s novel constitutional theory, however, the president can nonetheless tell all Americans what to wear on their faces.

To be sure, the president is not powerless when it comes to public health measures. He can order military personnel to take specified precautions, along with federal civilian employees, contractors, and certain beneficiaries when either accessing government installations or performing government work. Conditions of participation for federal programs are a familiar way in which the government transforms largesse into leverage. More broadly, Congress can exploit the power of the purse, up to a point, by conditioning funding to states on their adoption of certain policies. And the president always has the bully pulpit to advocate steps he cannot strictly order.

Despite inexorable federal expansion, however, James Madison’s distinction between the “few and defined” powers granted to the national government and the “numerous and indefinite” powers vested in the state governments remains central to America’s constitutional architecture. The 10th Amendment, expressly reserving all otherwise non-allocated powers to the states and to the people, reiterated and enshrined Madison’s fundamental insight. The familiar refrain that disease does not respect national and state boundaries is of course true, but the notion that the Constitution’s drafters were unaware of this fact is manifestly false. The American founders, although unfamiliar with jet travel, were well acquainted with the ravages of smallpox, having just been invaded by a giant overseas army bringing the deadly epidemic to colonial shores.

Conclusions about the potential efficacy of a national mask mandate are therefore not dispositive as to its constitutionality. Putting aside the important distinctions between facial coverings, medical masks, and respirators, it doesn’t require double-blind, peer-reviewed studies to presume that a physical barrier between people’s faces could be useful in blocking airborne particles. Why else would masks be standard issue in operating rooms? Indeed, Australian doctors have posited that aerosolized emanations from lower regions of the body could also spread the coronavirus. Thankfully we possess cutting-edge medical protective technology called pants.

Alas, Dr. Anthony Fauci confirmed what most of us always suspected when he belatedly told the media and Congress last month that the initial guidance against wearing masks was motivated by concerns over supply, not effectiveness. Of course, that’s not what public health experts told us at the time. In fact, they said the opposite. (Note to self: to avoid encouraging conspiracy theorists, try not to act conspiratorially).

In the end, whether masks are perceived as an expression of tyranny or a badge of honor does not change the basic constitutional calculus. White House Chief of Staff Mark Meadows confirmed this month that no federal mask mandate was forthcoming, but he framed it as a matter of “allowing governors and mayors to weigh in.” The case was put more accurately by Vice President Mike Pence, who tried (in vain) to remind a CBS interviewer that “one of the elements of the genius of America is the principle of federalism, of state and local control.” States can innovate and respond to local conditions, they can band together to offer mutual assistance, and they can request federal aid when needed.

The president lacks the general authority to regulate citizens’ personal lives in the name of public health. This is precisely why Chief Justice John Roberts had to engage in judicial gymnastics to uphold the Affordable Care Act’s individual health insurance mandate as a tax rather than a requirement. The federal government can tax, via a penalty for noncompliance, what it cannot otherwise control by directive. Perhaps this Supreme Court precedent sheds light on Vice President Biden’s pledge to “do everything possible” in the White House to make masks compulsory nationwide. In 2021, the mask tax cometh?

Lt. Col. Charles G. Kels teaches at the Army Medical Center of Excellence and serves as an Air Force reservist. His views do not reflect those of any government agency.