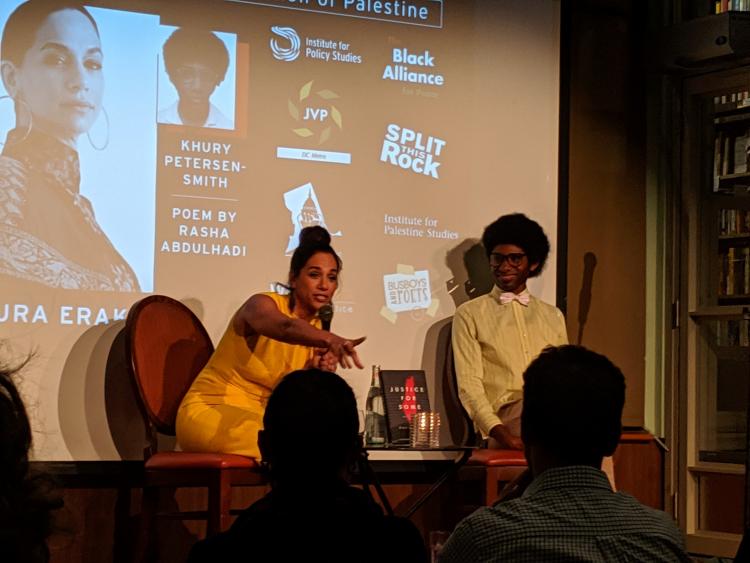 “I deal with a lot of mental health stuff because of this. I have so much anxiety,” fretted Rutgers University Professor Noura Erakat while discussing her anti-Israel activism at Washington, D.C.’s Busboys and Poets restaurant on K Street. Given Erakat’s ludicrous views on the Arab-Israeli conflict, one might indeed question her mental health. But the like-minded audience of 100 at the June 20 event for her latest book, Justice for Some: Law and the Question of Palestine, found her unfounded, revisionist history to be on the level.

While introducing Erakat, Busboys and Poets founder Andy Shallal noted proudly that the packed event room bore the name of Communist Israel-hater Angela Davis. Moderating the discussion was Khury Petersen-Smith, an Institute for Policy Studies (IPS) fellow and an organizer of the “2015 Black Solidarity Statement with Palestine,” the slogans for which include the trite “Zionism is racism.” Fittingly, Rasha Abdulhadi, a leftist poet and self-described “queer Palestinian Southerner,” read one of her poems.

The audience included a who’s who of anti-Israel leftists, such as Code Pink founder Medea Benjamin and Phyllis Bennis of IPS, an event co-sponsor. James Cobey and Zeina Azzam, well-known activists from Washington, D.C.’s local anti-Israel scene, attended. Erakat gushed that being “in the company of movement family” made this event her book-tour favorite.

In this hard-left echo chamber, Erakat recounted her personal traumas. In a paranoid nightmare, “There was just a red target on my head from a missile that followed me everywhere as I was running through Gaza.”

She also bragged about being among the founders of the anti-Semitic Students for Justice in Palestine (SJP) as an undergraduate at the University of California, Berkeley. After law school, she was an intern for the equally odious U.S. Campaign to End the Israeli Occupation of Palestine, which, as she noted, is now the U.S. Campaign for Palestinian Rights.

Even more troubling was Erakat’s acknowledgement that she earned her law degree in order to push a Palestinian agenda. “The law is politics,” she stated coldly, and “we should have no faith in the law, but approach it cynically.” She then flatly admitted, “This is why I went to law school; I wanted to sue” Israeli officials.

Erakat’s conception of the Palestinian agenda was equally radical: “Palestine is a revolution and not a state-building enterprise,” she declared. Recalling the century of conflict between Arabs and Jews following the 1917 Balfour Declaration, she announced, “I never call it a conflict. It is called the Palestinian struggle for freedom.”

Regarding fellow Israel-hater Rep. Ilhan Omar, Erakat whitewashed her anti-Semitism with an appeal to racial and religious victimhood. Whenever Omar “says innocuous things,” Erakat alleged, “because she wears hijab, all of a sudden that must have some anti-Semitic overtones.”

Erakat repeated her thesis that Arabs could “help indigenize” Israeli Jews into the Middle East and “rehabilitate that relationship” within a unitary Arab-Muslim-majority Palestinian state. Gravely distorting the nature of the Jewish state and its population, she asserted that “Israel was very much established in order to earn acceptance within Europe” and “so that Jews could become white.” She claimed that David Ben-Gurion, Israel’s founding prime minister, stated, “Israel is part of the Middle Eastern geography only,” which, given the region’s incessant hatred against Israel, was not entirely unreasonable.

“If you are indigenous to this land, shouldn’t you be a part of the Middle East in all ways?,” Erakat asked of Israeli Jews, suggesting the question: Should Israel therefore become a dictatorship or a theocracy? She favored this “one-state solution” over Israel being a “satellite state for Jews all over the world,” even though Zionism’s core is the reestablishment of a homeland for the Jewish diaspora. She fantasized about the equivalent of a “South African moment, when Nelson Mandela was no longer the president of black South Africans but became the president of South Africa.”

To bolster her anti-Zionism, Erakat appropriated the struggle of Mizrahi Jews — those who hail from the Middle East and North Africa — against what is, in fact, rapidly diminishing discrimination in Israel. She wanted “to cut across the native-settler binary. Instead of it being Palestinians versus Jewish Israelis, why don’t we do it as a racial struggle against .. the racial hierarchy within Israel?” Erakat rejected the terms “Middle Eastern Jews” or “Mizrahim,” claiming they serve “to separate them from the Arab world, so they cannot be both Jewish and Arab.”

As noted by Israeli Mizrahi journalist Hen Mazzig, anti-Israel ideologues like Erakat are imposing an Arab identity upon unwilling Jews. Jewish presence in the Middle East, along with other non-Arab communities such as Aramaic Christians, predates the region’s Arabization following the Islamic conquests in the seventh century. Moreover, Jews suffered greatly under Muslim rule in Arab countries. Such realities make a mockery of Erakat’s “vision for Jewish Israelis in the region” that would be supposedly “better than what Israel has been able to offer.”

Equally absurd were Erakat’s theories about the alleged “relationship between queer theory and Palestinian liberation,” given the mortal dangers to gay individuals in Palestinian society. Invoking intersectionality, she declared that if Palestinians are part of “emancipation on all levels, then we can’t stop at the door of homophobia,” even as she dismissed Israel’s tolerance for homosexuality as “pinkwashing” and “homonationalism.” Nonetheless, she admitted Palestinian society might not be so accepting when she warned that outsiders must let them “define that on their own terms.”

Erakat and her allies in Washington, D.C., and beyond form a leftist/Islamist, red-green coalition centered intellectually in Middle East studies, which in recent decades have abandoned principled scholarship for grievance-based, politicized writing and teaching. Lacking an empirical foundation for their claims, these activists in scholars’ robes invent false narratives that propagandize students and policy makers and willfully blind journalists. Academe’s unwillingness to reform itself leaves the job of countering and defeating these lies to extra-university organizations and concerned stakeholders, including alumni, donors, and legislators. Absent sustained efforts, today’s outrageous claims will become tomorrow’s conventional wisdom.

Andrew E. Harrod is a Campus Watch Fellow, freelance researcher, and writer who holds a Ph.D. from the Fletcher School of Law and Diplomacy and a J.D. from George Washington University Law School. He is a fellow with the Lawfare Project. Follow him on Twitter at @AEHarrod.