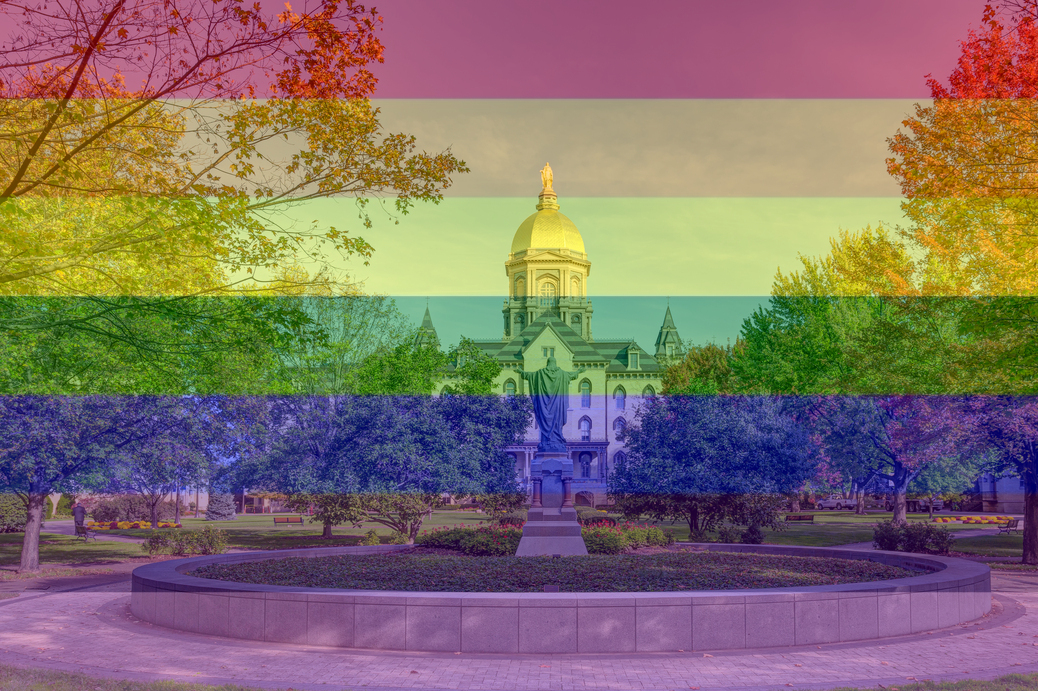 The University of Notre Dame required incoming students to engage in a video-based gender ideology training session last month before they could move into one of the university’s dormitories, all of which have their own Catholic chapel and celebrate Sunday Mass. The story was originally reported by Sycamore Trust.

A priest who is the vice president for student affairs, the Rev. Gerard Olinger, says in the introductory video that the teachings of the Catholic Church are “at the heart” of how the university approaches “differences in sexual orientation and gender identity.”

It tells students that a “transgender” person is “someone whose internal gender identity doesn’t match their biological sex.” It says that “gender identity” is “an individual’s inner sense of being male, female, or differently gendered person.”

Olinger applies Christ’s mandate to “Do to others what you would have them do to you” to his view of how Notre Dame students should approach people who identify as transgender or gay.

“Precisely because of Christ’s calling to treat others as we desire to be treated, this mission and the Catholic Church’s teaching is at the heart of how we as a university approach diversity on our campus, including differences in sexual orientation and gender identity,” says Olinger in the session’s introduction.

One of the training videos states that “gender expression” is “how a person behaves, appears, and presents themselves with regard to societal expectations of gender” and that “questioning” concerns people “in the process of discerning their sexual orientation or gender.” It tells students that “cisgender” applies to “someone who was born with the physical body that is the same as their gender.”

Another video features a female student who identifies herself as “bisexual” and informs everyone that she previously had a “same-sex partner.” The woman is wearing a cross necklace.

“I think the most important thing to me that makes me feel the most welcomed and the most safe is when people treat it like it’s no big deal,” she says, smiling. “I’m not here to make a scene. I’m not here to make a giant statement. I just want to exist and have a healthy, fun relationship just like everyone else here at Notre Dame, straight or otherwise.”

The student’s claim that she wants people to treat her now-ended lesbian relationship “like it’s no big deal” marks a further step by the Notre Dame administration towards advocating the acceptance of homosexual relationships.

For years, the administration has handed out numerous LGBTQ ally pins and denoted resident assistants’ dorms as LGBTQ “safe spaces,” but it has done so under the guise that such actions represent advocacy against discrimination on the basis of a gay or transgender identity, not as acceptance of homosexual behavior or transgender identities. Now, Notre Dame’s Catholic student newspaper, the Irish Rover, alleges that, in the training video, students are told they must “move from kindness to allyship,” an idea the university expresses in its promotion of events such as LGBTQ “Ally Week.” While LBGTQ activists in the United States understand “allyship” as advocating for the full legal and societal acceptance of homosexual relationships and transgender identities, it is unclear what Notre Dame means by the term.

Last year, Notre Dame officially recognized an LGBTQ alumni group and celebrated “Pride Month” on the university’s website. “Pride is a time to recall the trials the Lesbian, Gay, Bisexual, Transgender, and Queer (LGBTQ+) community has endured and to rejoice in the triumphs of trailblazing individuals who have bravely fought — and continue to fight — for full equality,” it said. This summer, the university sent all Notre Dame–affiliated alumni groups a “Tool Kit” to help them celebrate Pride month. (READ MORE: Notre Dame President Disputes Claim He Congratulated Obergefell Plaintiff on Court Win)

The Irish Rover reported that matriculating students were given a health form last month with the questions: “What sex were you assigned at birth on your birth certificate?” and “What is your current gender identity?” Compliance was voluntary.

In addition, students were asked to supply their preferred pronouns.

Despite these indications to the contrary, Notre Dame officially claims to accept the Catholic Church’s teaching on gender and sexuality. Its policy states that students who experience same-sex attraction are called to chastity and that “chastity is God’s invitation for all to be in loving relationship with others according to the demands of the moral virtues.”