by Ellie Gardey
The interior of a Chicago, Illinois, Barnes & Noble in 2018 (Anton Gvozdikov/Shutterstock) 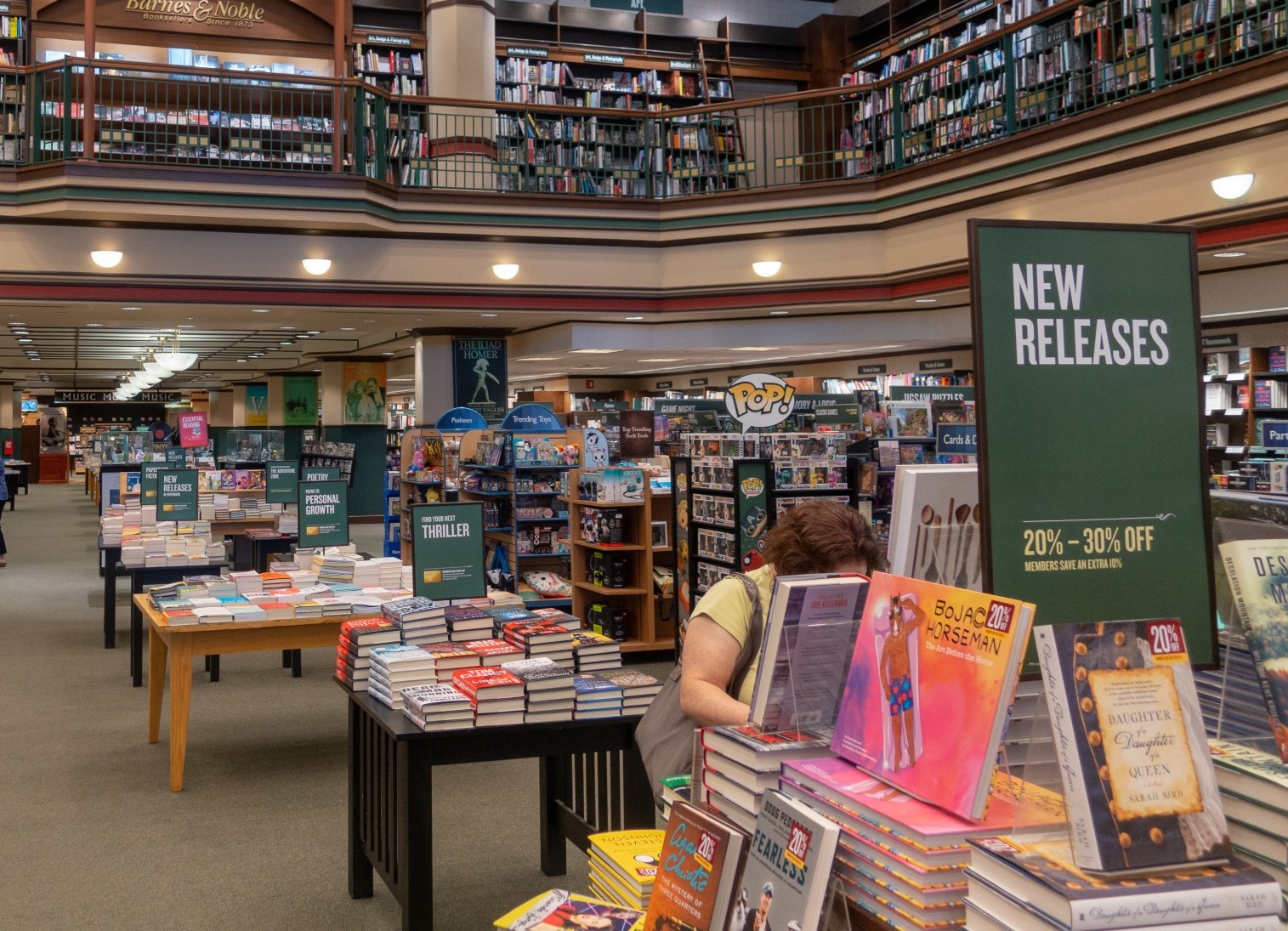 When James Daunt became the CEO of the national bookseller Barnes & Noble in 2019, he came with a clear vision: return decision-making on book selection to local store managers.

Previously, many publishers had deals with Barnes & Noble that gave them the ability to dictate which books would get shelf space. The rest of the decisions were made by New York–based Barnes & Noble advisers who would tell stores across the country which books to display.

Putting power into the hands of staff members at individual stores who could curate a collection that appealed to local tastes reversed Barnes & Noble’s years of decline. Today, the store has increased sales and lowered costs.

But now — even though Daunt’s changes were implemented three years ago — nonwhite writers are angry.

The critiques focus on the bookseller’s policies on hardcover books.

Barnes & Noble says that hardcover books, which cost more, struggle to sell well at the midtier level. As a result, its stores, responsive to the buying habits of their customers, are curating less of them. Daunt explained that, prior to the implementation of his strategy, “[u]p to 80 percent of middle grade hardcovers” purchased by Barnes & Noble went unsold and were returned to publishers.

“A good bookseller sells good books, and to do so must exercise taste,” he said in responding to the criticism. “This role of curation is essential but one that for many years Barnes & Noble abrogated.”

Some nonwhite authors are claiming that Barnes & Noble’s policies on hardcover books actually amount to a strict rule: It will only stock hardcover releases if they are one of a publisher’s top two bestsellers.

NBC News published an article Wednesday that said three nonwhite authors had told the news outlet that they were under the impression that their hardcover releases would not be stocked at Barnes & Noble unless their books were one of their publisher’s top-two releases.

Barnes & Noble disputes that this is its policy. A representative explained the store’s process under Daunt: “The book team reviews each book individually and places an initial PO to have the book stocked in the right stores…. The stores take it from there.”

“In short,” explained Daunt, “each bookstore now controls how they display and arrange their stock and, as they also control the ordering, the quantities they hold.”

But authors see the policies as opening the door to racial discrimination. They believe that marginalized authors had a better chance of being seen by potential readers when publishers chose which books would get shelf space, predicting that publishers have a more vested interest in giving a voice to racially diverse writers than booksellers.

There is, however, not any evidence to suggest that Barnes & Noble stores are less likely to give shelf space to diverse writers than publishers. In fact, the stores feature plenty of books from writers of many races and nationalities.

Kelly Yang, an Asian-American author, was devastated to learn that her soon-to-be-released book, Key Player, was not going to be stocked by Barnes & Noble.

There is not any evidence to suggest that Barnes & Noble stores are less likely to give shelf space to diverse writers than publishers.

“Here you have a book with a huge built-in audience, and you’re telling us at the last minute you’re passing on it,” she told NBC News. “You really don’t have a chance to ever become one of the top one or two, because how can you if your books are not going to be [stocked]?”

The book tells the story of a Chinese-American girl who feels conflicted when the United States and China are playing in the Women’s World Cup. The book description says that the character, Mia Tang, faces difficulty in “bringing two identities together.” The description states: “As Mia aims for her goals, she’ll have to face prejudice, discrimination, and her own fears. But if anyone can find a way to win, it’s Mia Tang!”

Laekan Zea Kemp, whose book Omega Morales and the Legend of La Lechuza is set to be released next month, said that Barnes & Noble’s policies give more attention to “straight, cis, able-bodied and white-centered books,” which can “hurt authors and young readers from marginalized backgrounds.”

In the book, a Mexican girl from a magical family conducts a séance under a full moon in an effort to unlock her powers of witchcraft.

“Publishers will take one look at the numbers, and they’ll think that my middle-grade debut failed because people didn’t want to read the book — rather than the truth that they simply couldn’t discover it,” Kemp said.

“Young people,” she said, “will wander the shelves of Barnes & Noble looking for, and never finding, books with characters who look like them.”

The cries of racism have been going viral on Twitter.

In a tweet, Baptiste criticized the practice of only stocking books that Barnes & Noble has determined will be financially successful:

If B&N withholds their support to stock debut titles in-store until they receive some sign a book is ‘worthy,’ this will give trad pub MORE incentive to throw more money behind books they WANT to be considered worthy. And most of the time, the debut books trad pub uplifts are white or white-appealing ones. This is bad, bad, bad all around.

“By allowing proper bookselling to take place at the store level, good books will have more space and better presentation, as well as genuine support from the booksellers of each store,” Daunt said.

He continued: “When we just took what was imposed by publishers, approximately 80% of the books were ultimately returned unsold. In effect, the bookstores were filled with books customers had no interest in reading. Now we sell most of what we buy.”

The pushback comes as publishers are giving increased focus to publishing books from authors who are not white.

In June, author James Patterson told the London Times that white men are experiencing “another form of racism” in publishing.

“What’s that all about? Can you get a job? Yes. Is it harder? Yes,” he said. “It’s even harder for older writers. You don’t meet many 52-year-old white males.”

A few days later, he apologized after furious backlash. “I apologize for saying white male writers having trouble finding work is a form of racism. I absolutely do not believe that racism is practiced against white writers,” he claimed.

In July, the author Joyce Carol Oates said, “A friend who is a literary agent told me that he cannot even get editors to read first novels by young white male writers, no matter how good; they are just not interested.”

The New York Times’ Nikole Hannah-Jones responded: “Anonymous single person anecdote with wildly unprovable claim. You all want to be oppressed so badly.”

In July, 83 “of the 100 most recent debut book deals listed on Publisher’s Marketplace” had gone to women. Twelve went to white men.

Publishers say they are engaged in an effort to prioritize writers who are not white or male.

Following the death of George Floyd in 2020, Penguin Random House said that it “reaffirmed our commitment to foster greater diversity, equity, and inclusion within our company and throughout the publishing industry” and committed to “increase the number of books we publish, promote, market, and sell by Contributors of color.”

With Barnes & Noble’s decision to let stores decide what books to sell, publishers do not have the absolute power to make its stores sell fewer books from white writers.

Barnes & Noble maintains that its policies actually increase diversity, not lessen it.

Daunt said his company’s policies are “especially valuable” for “new and emerging talent.”

“Far from carrying only ‘bestsellers’, by which is meant the very well established and small number of authors who sell year in, year out,” he said, “Barnes & Noble will give the space and devote the energy to propel the success of new voices. This is what it is to be a good bookseller.”

Many store managers are likely eager to use their increased freedom to feature books from authors with diverse perspectives. A store manager at the Idaho Falls, Idaho, Barnes & Noble store, John Radford, told the Wall Street Journal what these policies look like in practice.

Before Daunt, his role had been to stock books written by authors like James Patterson, who has written more than a hundred bestselling books, and John Grisham, who wrote 28 consecutive No. 1 fiction bestsellers. Radford said many of those books had to be sent back to the publisher due to a lack of local interest.

Under Daunt, he cultivates his own selection of books to appeal to Idahoans. Radford said he has begun selling books from mystery novel writers C.J. Box and Craig Johnson, who are from neighboring Wyoming and whose books are set there. After gaining the power to curate his store’s books, Radford increased sales at the Idaho Falls store.

For now, publishers no longer have the final say on the racial makeup of authors whose books are featured in bookstores. That Barnes & Noble’s sales are up suggests that what readers are looking for in writing is merit — not a story crafted by a person of a certain race.