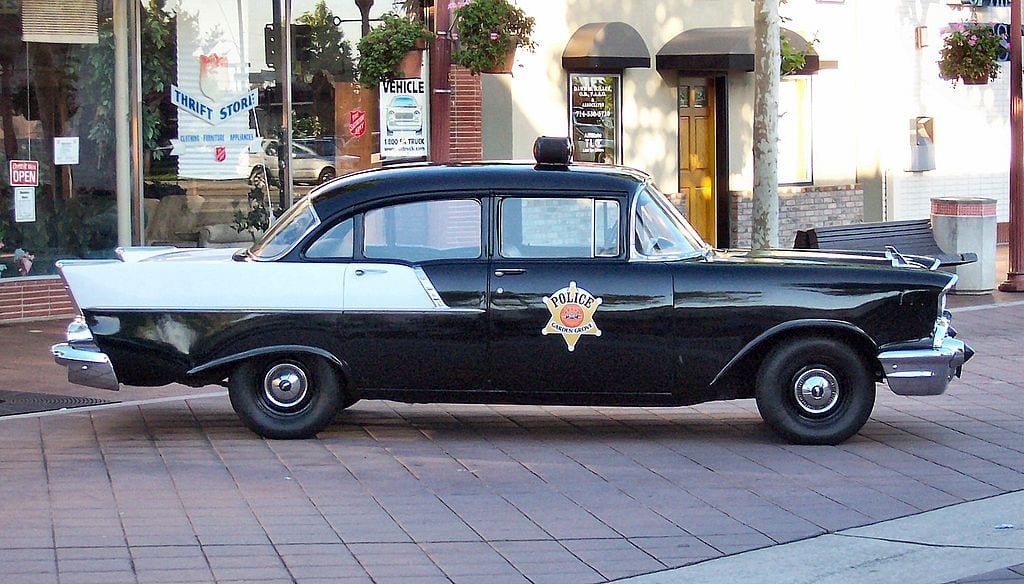 Five years or so from now, there may be no more cop cars.

Vehicles used by cops, certainly. But not cars. These are being retired — in the Blade Runner taking-care-of-the-Replicants sense. Ford just announced it won’t be making the Taurus — which is the basis for the Taurus cop car — for much longer. So there goes that one. The other one is the Dodge Charger, extremely popular with cops because of its rear-drive layout and powerful Hemi V8 engine.

But — savor the irony — the government’s fuel economy fatwa shave made it very hard for any car company to continue mass-producing such a car, and the Charger is the last such car left on the field.

They use “too much” gas, says Uncle — who levies fines to discourage people (well, people like you and me) from buying them. Which in turn discourages car companies from manufacturing them.

Fiat — which owns Dodge (and Chrysler) —may not keep the Charger production line going much longer for exactly this reason. The current Charger is big, heavy — and too thirsty.

Not for us — but for Uncle.

The Charger is also ancient in terms of its underlying chassis. It dates back to the ’90s — when Chrysler (this was before Fiat) got access through the partnership it had at that time with Mercedes to the Benz E-Class chassis, which became the basis for what became the current Charger and its higher-zoot cousin, the Chrysler 300. Both are long overdue for a reboot. But that may not happen because of CAFE and if it does happen, making the next-gen Charger CAFE-compliant would probably mean a smaller, lighter and probably front-drive car not suited for cop work.

GM, meanwhile, is killing off the full-size Impala and the mid-sized Malibu is too small (and underpowered) for cop work.

These are quickly becoming the cop “car” of choice. Models like the Chevy Tahoe and Ford Explorer are already in general use; their ranks are certain to expand as the number of potential cars still being made that could serve as cop cars slims to none and the remaining fleet of cop cars attrites out of service.

The cops seem not to mind.

SUVs are large and comfortable and also rear-drive (well, the Tahoe is) and some are built with big V8s, which cops love as much as we do.

Ironically, these heavy and un-aerodynamic machines use even moregas than the politically incorrect cars being… retired.

Some animals always being more equal than others.

And when you have unlimited access to other people’s money, paying “gas guzzler” penalties is hardly a bother, either.

But never mind that.

Cops in SUVs could prove to be an unintentional boon for us.

They are, first of all, harder to hide. That makes them easier to spot. Ideally, in time enough to pretend we were obeying whatever ridiculous law they were lying in wait in the hope of catching us affronting. An easier-to-spot cop SUV is almost as good as a good radar detector.

Second, they are easier to lose.

No matter how fast an SUV may be in a straight line, it will have to slow down for the curves due to its higher center of gravity. SUVs have wider turning circles, too. That makes them less maneuverable than cars.

Which gives you an advantage, if you are in a car.

Also, even though today’s SUVs are quicker than classic-era V8 muscle cars, they are still pretty slow (most of them) relative to today’s performance cars. Even the hottest version of the Explorer — the one equipped with the optional “EcoBoost” twin turbo V6 — is only about as quick to 60 as a four cylinder-powered Mustang.

It will take a cut-out lurking cop in an SUV longer to close the gap between him and you, regardless of what you’re driving. This gives you crucial additional seconds to get out of sight, if you’re so inclined.

But the real perk is that eventually, inevitably, cops will lose their SUVs, too.

Because SUVs are also required to be CAFE compliant and fleet sales to cop shops won’t sustain production of them any more than it has kept big sedans in service. “Gas guzzling” SUVs will go the way of the Crown Vic and Impala (the prior Impala, rear-drive, six-passenger, and V8 powered) and now the Taurus and Charger (both smaller cars than the old Vic and Impala).

This may cause an outcry by the one group (cops) the government sometimes listens to.

And it may result in a dialing back of the obnoxious fuel economy fatwas which are killing the types of cars we all love, but which the government hates that we continue to buy.