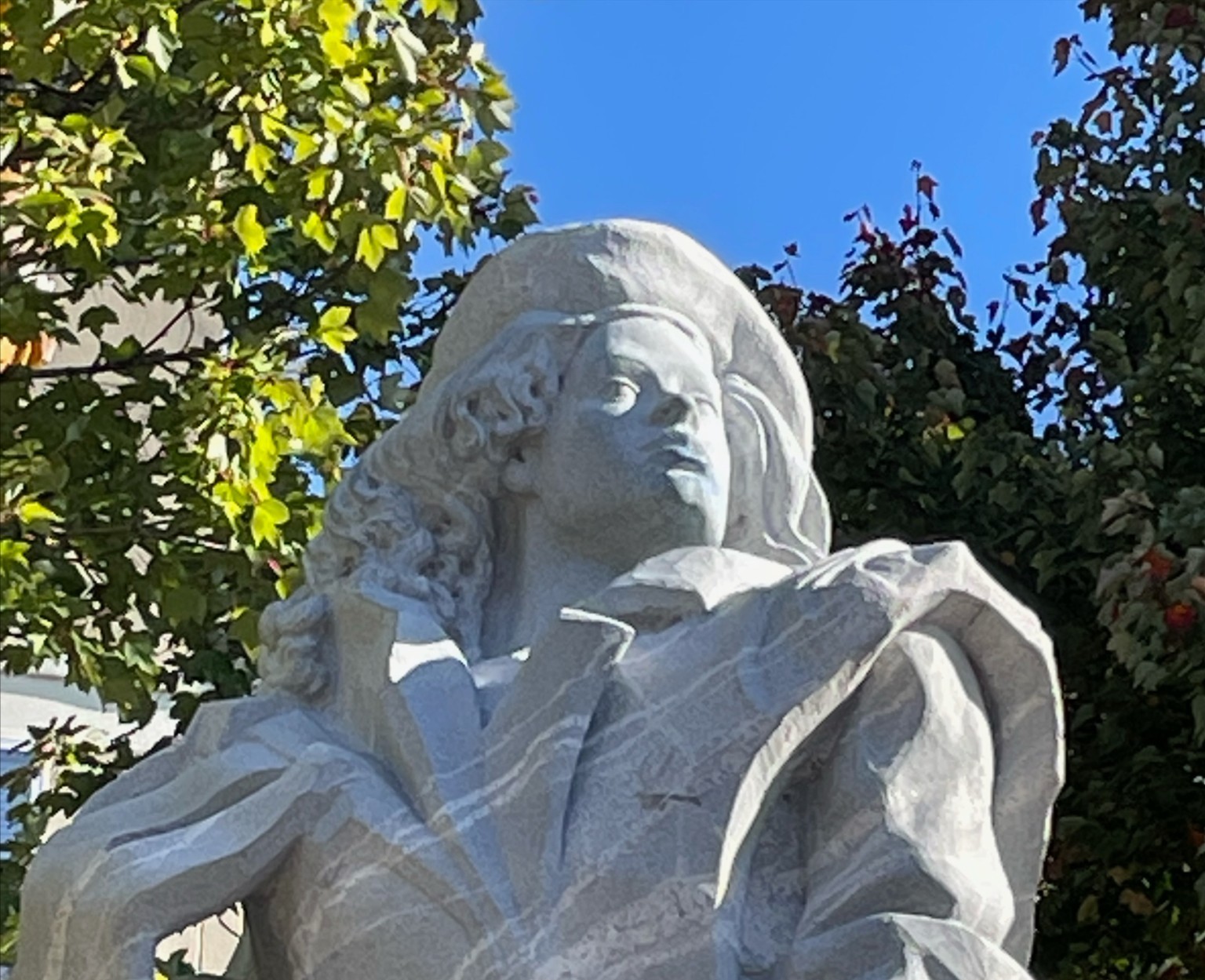 In the age of disappearing Snapchat messages, Insta stories, and 280-character tweets, it is reasonable to ask why building lasting monuments matters. It matters because in this sea of 21st-century distraction, we must be pulled out of our everyday lives from time to time and be faced with timeless truths and virtues to aspire to.

Monuments can represent these truths. One such statue, slated to be revealed in Atlanta’s Peace Park on Oct. 23, embodies these values. Yet the story it tells is not an American story but a Hungarian one.

Sixty-six years ago, at the height of the Cold War, a small Central European nation shook the Soviet Union. The 1956 Hungarian Revolution became the symbol of hope in the face of the world’s deadliest ideology. To this day, the Hungarians’ fight for liberty, sovereignty, and freedom of identity against oppression is an unquestionable heritage of Hungarians living within and outside of Hungary today. And the sacrifice of the 1956 Freedom Fighters inspires millions suffering under the yoke of communism today.

Over six decades ago, the Hungarian Revolution dramatically revealed the unsustainability and hypocrisy of the Soviet Union. It showed the world that the Soviet model was not a viable alternative to a capitalist market economy but an absurd system relying upon the fear of the oppressed. When students and workers, young and old, men, women, and even children marched with guns and flags in their hands for their freedom in 1956, their heroic struggle — degradingly labeled a “counterrevolution” in the communist media — attracted the sympathy and empathy of the entire Western world. Solidarity of the West warmed the hearts of those who fought, even though, in the absence of military aid, the revolution was put down by the Soviet army. The Soviets’ retaliation was brutal, and Hungarians fighting for their freedom became the primary victims of the communists’ massacre. Nearly 200,000 Hungarians were forced to seek asylum abroad, with 35,000 finding a new home in the United States of America.

This week, the land of the free and the home of the brave will remember the Freedom Fighters with a sculpture created by international visual artist Stan Mullins, unveiled in Atlanta, Georgia — home of a small but active Hungarian-American diaspora. The Freedom Fighter sculpture, erected by patriotic Americans and initiated by the Hungarian American Coalition, portrays a woman emerging from Elberton granite, expressing grace, grit, and power in the face of the Soviet Union’s mighty force. She reminds all generations and nations of the courage every individual can find for fighting for a better future, no matter the odds. Her overall appearance demonstrates strength and hope. Her eyes look to the future; her smile shows resistance; and her face expresses pride. The woman is wrapped in the iconic Hungarian flag with a hole in the middle — as revolutionists cut out the alien communist coat of arms from the nation’s flag.

The Freedom Fighter sculpture is the first female statue on American soil to commemorate the 1956 revolution. But this is not the first time the Hungarian flag has appeared in American public art on grand display. On Nov. 18, 1956, two weeks after the revolution was crushed, during the ongoing cruel reprisals against the defeated revolutionaries, the red, white, and green Hungarian flag flew below the torch of the Statute of Liberty — next to a U.S. flag — calling the world’s attention to the brutal crimes of the communist dictatorship. 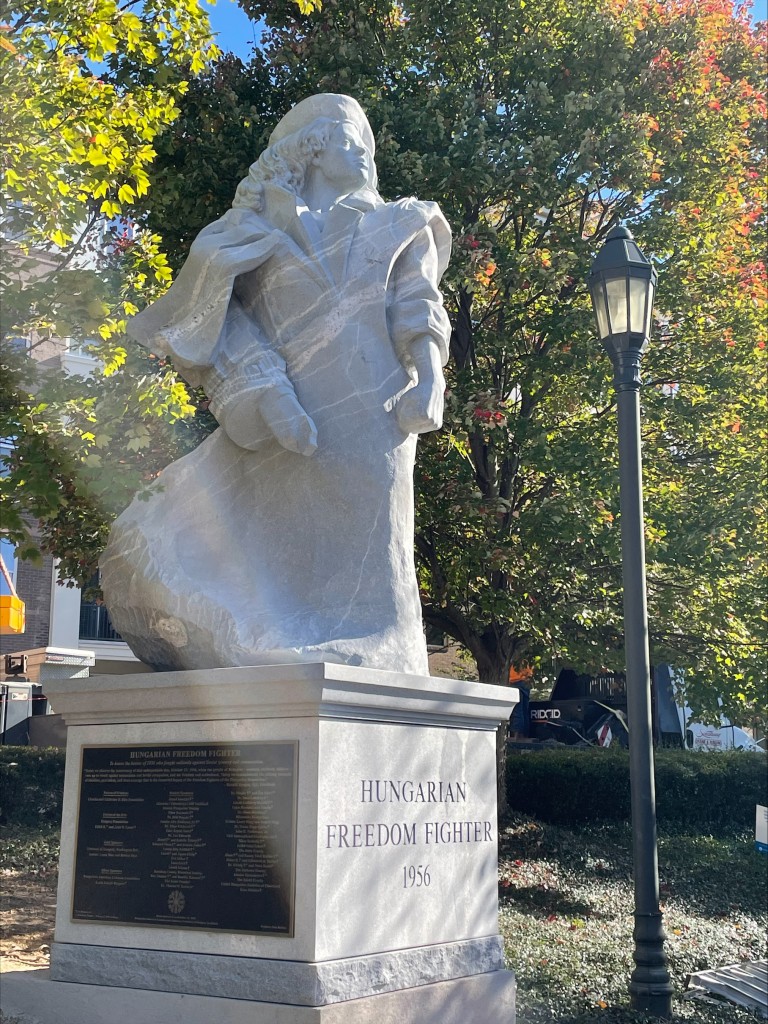 The Statue of Liberty, like the Freedom Fighter Statue being unveiled this week, celebrates the same struggle for self-governance and basic political rights that Americans fought for in 1776. Both sculptures are symbolic gifts to the United States, representing the shared ideals of freedom and independence.

As the Statue of Liberty is joined by her Hungarian peer, these two monuments serve as lasting testaments to the courage a people must have to preserve its freedoms. These statues belong to all of us. They form part of our common heritage — a heritage worth fighting for.

Lilla Nóra Kiss, Ph.D., is a visiting scholar and adjunct faculty at Antonin Scalia Law School, George Mason University. Her research focuses on social media platforms, data protection, and free speech. Lilla is a founding member of Freedom of Identity in Central Europe (FICE) working group and founding editor of Constitutional Discourse. She worked as a counselor on European Union issues at the Hungarian Ministry of Justice and as a researcher and lecturer at the University of Miskolc, Hungary.