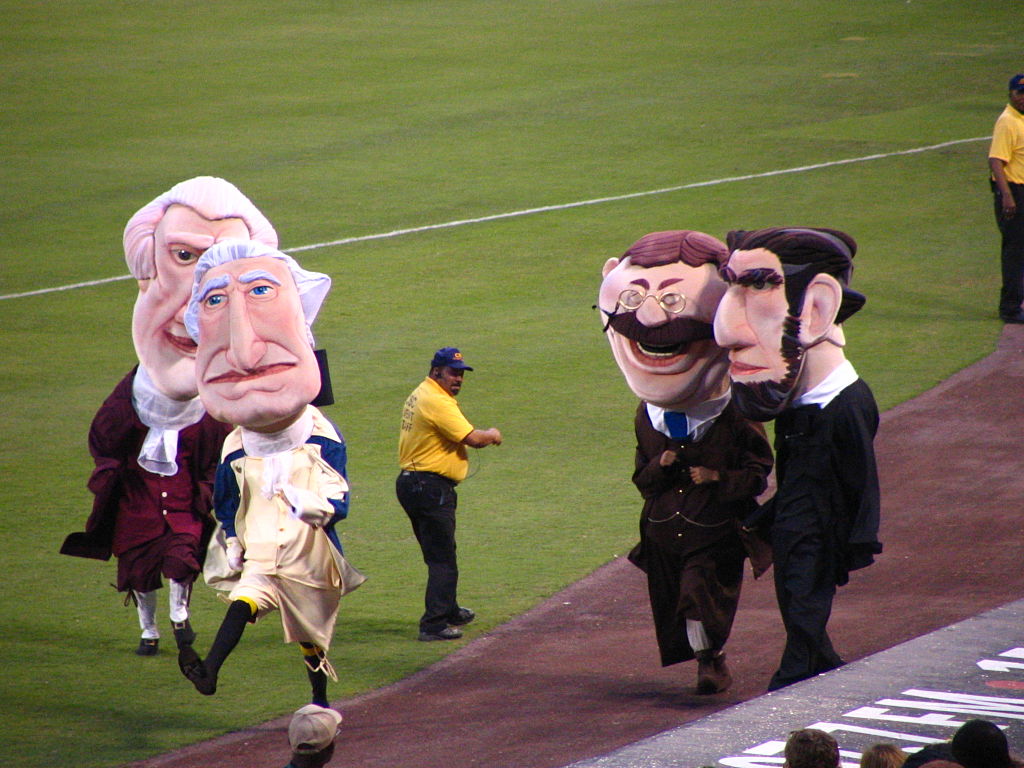 As the Cancel Culture continues, Washington baseball’s racing presidents may be running for their lives. It is only a matter of time before the Left turn its jaundiced eye toward the beloved mascots that have entertained Washington Nationals crowds for years. If you do not think it could happen, you do not know America’s Left. Having already pulled down these presidents’ stone images, why not their foam ones?

Recently, San Francisco outdid itself in asininity. With many schools still not reopened, local officials took time away from crisis management to busy-body themselves with seeking to change “offensive” school names. Yes, you read correctly: Despite schools not having students on the inside, officials were worried about names on the outside.

According to a recent Fox News report, “The San Francisco School Names Advisory Committee researched school names and identified certain ones for renaming.” Among the Committee’s criteria for erasure consideration: “Anyone directly involved in the colonization of people, those connected to any human rights or environmental abuses, slave owners or participants in enslavement, and known racists and/or white supremacists and/or espoused racist beliefs.”

With expectations thus raised so high, you would expect some real doozies to be lurking on San Fran’s lintels of learning. Did a Hitler High or a Mao Zedong Middle School somehow escape detection all these years? No. The names on the list contain some that are laughably innocuous anywhere else in America: Washington, Jefferson, Lincoln, and Roosevelt.

While all four reside on Mount Rushmore (no thanks to the Committee), they are under review to come down from San Francisco’s schools. San Francisco’s school board will review the full list before voting early next year. Perfectly summarizing elitist effrontery, Mark Sanchez, the Board’s president, said, “I don’t think there is ever going to be a time when people are ready for this. Predictably, people are going to be upset no matter when we do this.” In most places, that would raise the question, “Why do it then?” Only to the Left would the answer come back: “Why not?”

Presumably, San Francisco believes there is nothing more likely to buck the distance-learning doldrums like the Left’s updated version of an old-fashioned book-burning. Sadly, unlike Las Vegas what happens in California rarely stays in California. Dopey gets out. A continent away, but no less incontinent in political correctness, Washington, D.C., is simply unable to control its liberal impulses and is always loath to be outdone in PC preciousness.

Therefore, if San Francisco is going to launch a jihad against “racist” presidents, how long will it take for a similar one to begin against Washington’s racing ones?

For those unfamiliar with one of the finer spectacles in sport, the Washington Nationals have four beloved racing president mascots. They are none other than Washington, Jefferson, Lincoln, and Roosevelt — or, as the fans know them, George, Tom, Abe, and Teddy. From Rushmore’s stone to Nationals’ foam, in the mid-fourth inning, the four race from the ballpark’s outfield as the crowd cheers. They have run for years and by now entertained millions.

But now that George, Tom, Abe, and Teddy are on San Fran’s “offensive” list, could they be (and assuredly they will be as soon as the lefties latch on to it) in danger? Impossible? Consider: They have already had their likenesses toppled elsewhere. What offends them in stone is no less likely to offend them in foam.

George, Tom, Abe, and Teddy are all guilty of being white, and male too. There is no diversity here. No women, no foreign figures, no foam of color. After all, where is written that they must be American presidents, just because they run during America’s national pastime? George, Tom, and Abe all predated major league baseball anyway. They are white privilege on parade — racing no less.

Just because it is preposterous does not mean it will not excite the Left. Consider the idiocy they have already perpetrated. Their quest is not about righting wrongs as much as it is about rewriting history to suit their view of the present. It is all about them, and they are all about making the rest of society bend to their demands.

American society for the most part has passively obliged, falling over itself to assuage its guilt and cater to the Left’s whims. Of course, this has encouraged the Left all the more. Like a tantrum-throwing toddler, demands met have equaled demands raised.

America’s Left is, after all, a humorless and remorseless bunch. They lack a sense of humor because they lack both sense and humor. They have silently and slowly wrung fun from America. No longer can Americans have an event for the fun of it; there must be a “cause” to justify it. Which brings us back to poor George, Tom, Abe, and Teddy. They are just fun and nothing more. This of course offers the Left a two-fer: Stop the fun and inject a cause.

Looking back at old photographs, we marvel at outdated styles, smugly assuming that we will not look the same to future generations. Enjoy this misapprehension. Our version of hoop skirts and bell-bottoms is staring us in the face: It is political correctness run amok in the Cancel Culture. Future generations will be as unbelieving that we willingly submitted to a tyranny by the minority, as many of us are currently unaware of it.

The perpetual motion machine of the professionally offended is one in constant search of new grievances. There can be no history under the Left’s approach because it must be continually revised to meet their prejudices of the moment. Under such subjective circumstances, the only people the Left will permit on pedestals are themselves.

The rational mind cannot now predict what the irrational will do next. The only certainty is irrationality. In the Left’s world without history, there can only be the present — and certainly no racing presidents. They will assuredly come after George, Tom, Abe, and Teddy just as they have everything else. The Left need no greater reason — though they will certainly concoct one — than that the rest of us enjoy them.