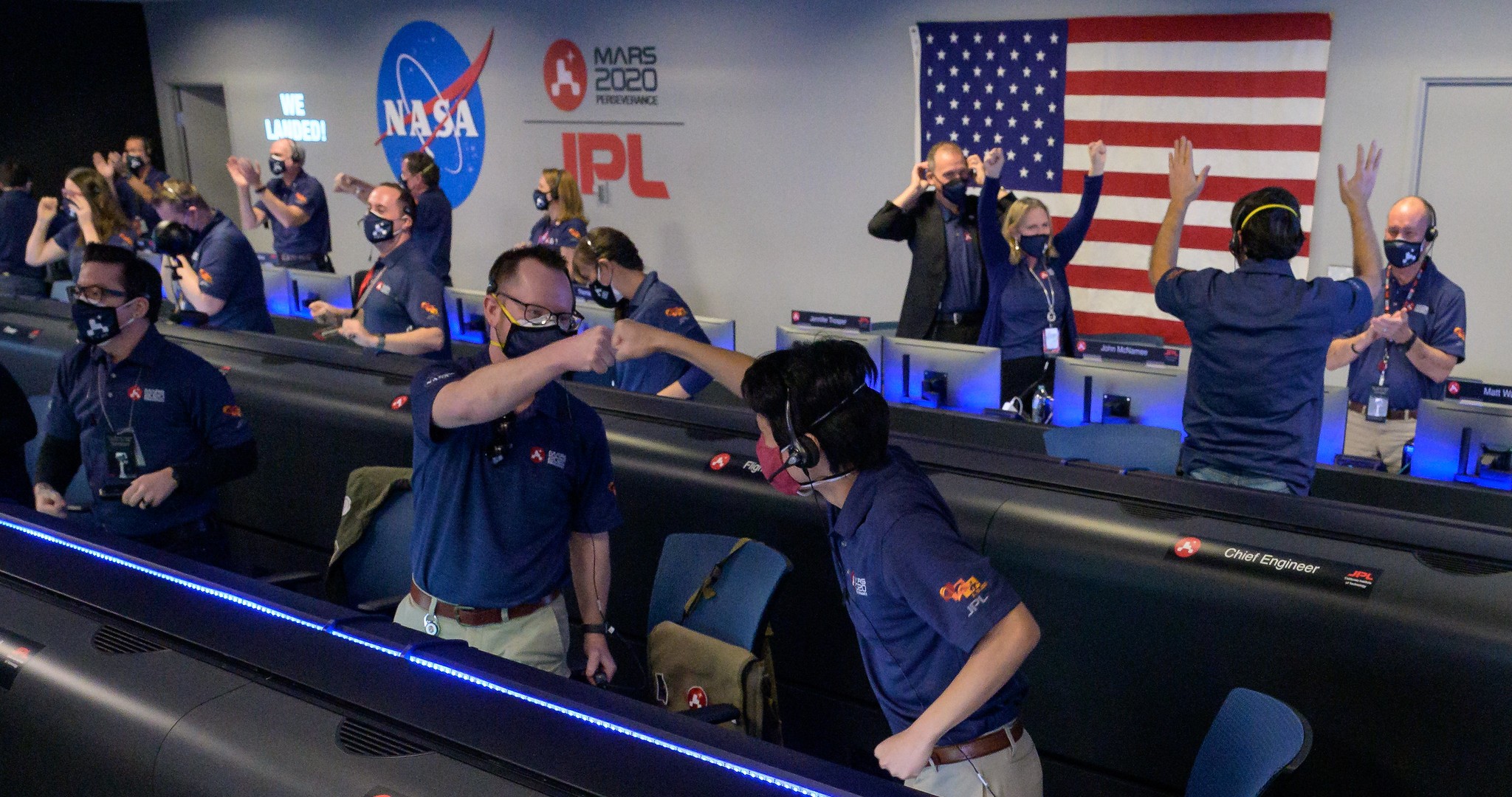 Thursday, February 18, 2021, 3:15 pm ET. NASA’s Mars 2020 mission enters orbit around the red planet and prepares to insert the complex skycrane/rover/helicopter package into the thin Martian atmosphere. The heat shield functions perfectly, the parachute deploys, the back shell and parachute detach, the heat shield is dropped, the sky crane rockets ignite, and the rover is gently lowered on tethers to gently touch down on the Martian surface.

In the weeks preceding the successful landing, NASA pulled out all the stops with a full court press promotion of the ambitious Mars 2020 mission: “Perseverance just really shows that if you get a group of very diverse people what happens is you can solve problems that seemed impossible.”

The ebullient countdown continued, culminating in a thrilling video clip: “Seven Minutes of Terror.” A soundtrack worthy of Jason Bourne thrashes and crashes in the background, highlighting realistic CGI graphics of the red planet. Disembodied alternating male and female voices: “Nothing can be taken for granted when you get to Mars — There’s just a lot of things that we just don’t know. Space always has a way of throwing us curveballs and surprising us. I mean until we get the data that says were on the ground safely, I’m going to be worried that we’re not going to make it.”

A title rolls into focus: Perseverance’s Entry, Descent, and Landing. An attractive, dark-haired woman with a red bindi spot on her forehead comes on screen, identified as Swati Mohan, Mars 2020 Guidance Navigation and Control Operations Lead. “Entry, Descent and Landing is often referred to as the seven minutes of terror,” she says, “Because it takes about seven minutes to get from the top of the atmosphere of Mars to the ground safely.”

Matt Smith, a handsome African American, with Mars 2020 Flight Director Cruise Operations, declares, “The spacecraft has to do all of this by itself.”

Mohan again: “There are many things that have to go right to get Perseverance on the ground safely.”

Visual and audio clips showcasing exclusively female or male team members “of color” are cut in rapidly, playing against the thumping music and dramatic CGI graphics of the various stages of the Mars 2020 technologies.

Asian male Al Chen, Lead of Mars 2020 Entry Descent and Landing, intones, “There’s a lot counting on this. It’s the first leg of our sample return relay race. There’s a lot of work on the line.”

Smith: “Starting about 10 minutes before atmosphere entry you get rid of the spacecraft part of the rover that’s been supporting us.”

Chloe Sackier, Entry, Descent, and Landing Systems Engineer: “We come screaming into the Martian atmosphere at around 12 to 13,000 miles per hour.”

Erisa Stilley, Entry, Descent, and Landing Operations Lead: “And the heat shield is what dissipates all that initial energy through friction.”

The tag-team quotes continue stressing the hazards and inherent dangers of the mission:

“The vehicle will continue to fly itself through the atmosphere sort of like a transforming vehicle that was a spacecraft and is now like an aircraft actively guiding itself.”

“When we’re going slow enough we deploy the parachute.”

“The biggest supersonic parachute we’ve ever sent to another planet, it’s critical for slowing down the vehicle.”

“But fundamentally, Perseverance is a different rover. She’s bigger. She has different instruments.”

“We’ve added a lot of smarts on the inside to make it more capable so that it can deal with the landing site we’ve given it.”

“The science team identified Jezero crater as basically an ancient lake bed — one of the most promising places to look for evidence of ancient microbial life and to collect samples for future return to Earth. Ah, the problem is it’s a much more hazardous place to land.”

“You look at Jezero, all you see is danger. How do we go to a site that we never thought was safe enough to go to before?”

Taken by themselves, the quotes aren’t particularly profound, but crashed together with the dramatic music and stunning visuals, they hammer home three messages: “This is important,” “This is dangerous (and may not work),” and “NASA is diverse.” These are important messages for a NASA struggling to maintain its momentum under a Biden–Harris administration. The rainbow reflected in the gender/racial makeup of the spokespersons plays to the Biden–Harris obsession with “equity.” If the mission is not completely successful, the extreme difficulty and inherent dangers being overcome soften the blow of potential failure. By developing a breathless audience for the mission, NASA hopes that the social warriors in the new administration may be more reluctant to rob NASA finances, as the Obama administration did. And by highlighting the extreme difficulty, any success is all the sweeter.

But not to worry — after all, this is not NASA’s first rodeo.

The cruise spacecraft arrives in Mars orbit and drops its payload, and the parachute deploys. The heat shield drops, sophisticated imaging technologies map appropriate landing sites between the rocks and beneath towering crater rims, the sky crane rockets ignite, the rover/helicopter module drops on tethers twenty meters above the uneven terrain, the rover touches down safely, the sky crane rockets off to crash a “safe distance away.”

The seven minutes of terror, is negotiated safely, and now? The real mission can begin.

Back to those “seven minutes of terror.”

The five NASA spokespersons, three women (one “of color”) and two men (both “of color”) were certainly up to the job of delivering an exciting, informative narration of the complex mission to Mars. But was there not one white male involved in the entire Perseverance team? If that’s true, was the creation of the video a case of “white males need not apply?”

Actually, the demographics of NASA’s Jet Propulsion Laboratory (JPL), the primary mover and shaker behind deep space robotic missions, reflect an employee base that is 30 percent female and 51 percent “ethnic minorities.” The math seems to convey a “white male” minority that should qualify them for at least token visibility as part of a “diverse team.” On the other hand, 85 percent of JPL’s employees have been reported as identifying as members of the Democratic Party, a party that NASA as a whole is particularly interested in placating.

The desire to curry favor with an administration whose only priorities appear to be Racial/Gender Equity, COVID/Health Care Equity, Global Warming Equity, and Economic Equity is obvious. Apparently that means that “If you can see it you can be it” no longer applies to young white male students, pilots, or engineers.

I get it. John Glenn was a white male. All of the groundbreaking heroes of America’s space program from Mercury to Apollo were white males. I get that many of the Space Shuttle–era female astronauts were largely considered “tokens.” Some were Air Force pilots who served with distinction — but many were “scholars,” “engineers,” or “scientists” rushed through space-suit training to satisfy the burgeoning demands of feminists.

Mars 2020 is one half of a sample return mission. A joint NASA–European Space Administration mission scheduled for 2026 will retrieve the core samples stacked by Perseverance and return them to Earth — if NASA is allowed to stay the course.

In their rush to convince a Democrat administration that they are appropriately “woke,” NASA would do well to take the words of their first Hispanic female astronaut, Dr. Ellen Ochoa, to heart: “What everyone in the astronaut corps shares in common is not gender or ethnic background,” Ochoa said, “but motivation, perseverance, and desire — the desire to participate in a voyage of discovery.”