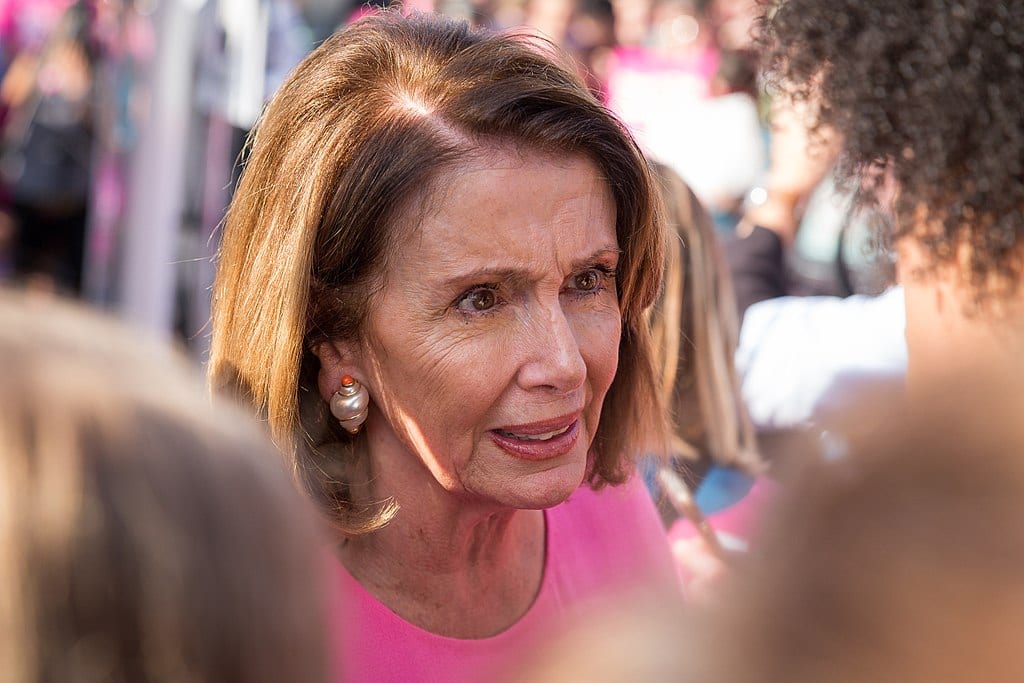 And there it is. Yet again. Endlessly again.

Here is the leader of House Democrats, a former Speaker of the House, addressing the U.S. Conference of Mayors about the latest Trump immigration plan. Said Leader Pelosi:

“Let me just say what I said last night: that plan is a campaign to make America white again.”

In making such a baldly racist pitch Pelosi illustrates vividly not only her party’s horrifically racist past but indicates that for Democrats and progressives, in true Shakespearean style, the past is prologue. The saying, of course, originates from Shakespeare’s The Tempest. It is also carved on the National Archives Building down the Hill from the U.S. Capitol building. Not accidentally the entrance to the Archives Exhibit Hall, where one will see displayed the Declaration of Independence, the Constitution, and the Bill of Rights — is on the Washington boulevard named for the nation’s governing document — Constitution Avenue.

Recall the Constitution? That would be the document into which a notable predecessor in Pelosi’s party — a Democrat named Roger Taney — tried to make slavery a constitutional right. In his capacity as a Democrat-appointee as Chief Justice of the United States Supreme Court. Like Pelosi, Taney applied exactly the same test to deciding the case of Dred Scott v. Sandford as Pelosi is applying to illegal immigration — skin color. Neither Taney nor Pelosi saw or see human beings as human beings, unique individuals every one of whom bleeds the same color red blood and whose brains are gray. What both Taney and Pelosi judged — and judged is the word — is skin color. In fact, as the political careers of both make plain, skin-color judging played and still plays a central component in the Democratic Party of their respective eras.

Leader Pelosi makes her statement that the Trump immigration plan is “a campaign to make America white again” — without the slightest hint that all she has to do is arrange for herself and deputy Steny Hoyer (D-MD) to step aside and — presto — the third ranking Democrat in the House — South Carolina’s James Clyburn — would be in line to be the first black House Democratic Leader. And, if Democrats did capture the House in November, Clyburn would be the first black Speaker of the House.

But curiously and alas, the white Leader Pelosi is not about to yield her post to the black Mr. Clyburn. Imagine that.

Recall that it is Pelosi’s party that has produced an endless line of leaders who have made it their business to judge by skin color. As author Bruce Bartlett correctly details in Wrong on Race: The Democratic Party’s Buried Past: “Virtually every significant racist in American political history was a Democrat.”

From the party’s founding by slave owners to its rule by post-Civil War identity politics — that would be segregation — until today the political formula Pelosi is using is literally as old as the birth of the American political party system. The equation, as discussed in this space many times, is simple: race plus left-wing agenda of the moment equals political victory. Let’s recall some of those names of left-wingers/Democrats/progressives who have played this game over the centuries.

It began at the beginning, with Thomas Jefferson, founder of the Democratic Party. As noted by historian Garry Wills in his book ‘Negro President’: Jefferson and the Slave Party: “Control of the presidency rested on the slave power’s deep roots in the patronage and court systems of the Jeffersonian party.”

The other president Democrats consider, with Jefferson, as the “co-founder” of their party is, of course, fellow slave owner Andrew Jackson. It was Jackson who made Roger Taney Attorney General of the United States. As Attorney General, Taney issued one opinion saying that South Carolina had the right to bar free blacks from the state, and a second that said descendants of slaves were not citizens. Appointed by Jackson as Chief Justice of the Supreme Court, it was from the Court that Taney attempted to write slavery into the Constitution.

And on through party history until today the Democrats’ “Culture of Racism” has supported one skin-color-judging politician after another. Whether it is names more obscure today like Senators Ben Tillman or Coleman Blease of South Carolina or more famous names like President Woodrow Wilson, President Jimmy Carter, Alabama’s Governor George Wallace, or now Leader Pelosi, a long and considerable parade of race-card playing Democrats personify the racist history of the party. They have been mayors, state legislators, Members of Congress, United States Senators, Governors and, alas, as in the case of Wilson and Carter, Presidents of the United States. Carter, to remind, won his election as governor of Georgia by making an alliance with one of the state of Georgia’s most notorious-in-the day racists. That would be, according to Carter biographer and then-New York Times Atlanta Bureau Chief James Wooten, one Roy Harris. In his Carter book, Dasher: The Roots and the Rising of Jimmy Carter, Wooten paints a vivid description of Carter ally Harris, whom he calls “Mr. Segregation,” as someone who would growl out his belief that “the tiniest drop of n***** blood will spoil a man.” Lovely.

Consider this from Bartlett on the political career of South Carolina’s racist Senator Tillman, who was first elected governor before winning his Senate state: “Playing the race card helped Tillman organize the white farmers, who viewed blacks as economic competitors.”

The news here isn’t that Nancy Pelosi believes what she said or that her clear belief of judging immigrants by skin color is so offensive. The real news here is the obvious. It isn’t news at all.

Judging by skin color — whether it is Pelosi appealing to brown-skinned illegals in 2018 or Tillman appealing to white skinned farmers in 1890’s South Carolina — this is what Democrats are and have always been about.

The real question here is whether Republicans will stand up — again — to this disreputable, damaging, and dangerous obsession. It is and must be part of a horrific past — not the future. There is no reason to make the racist past of the Left the prologue for America’s future.