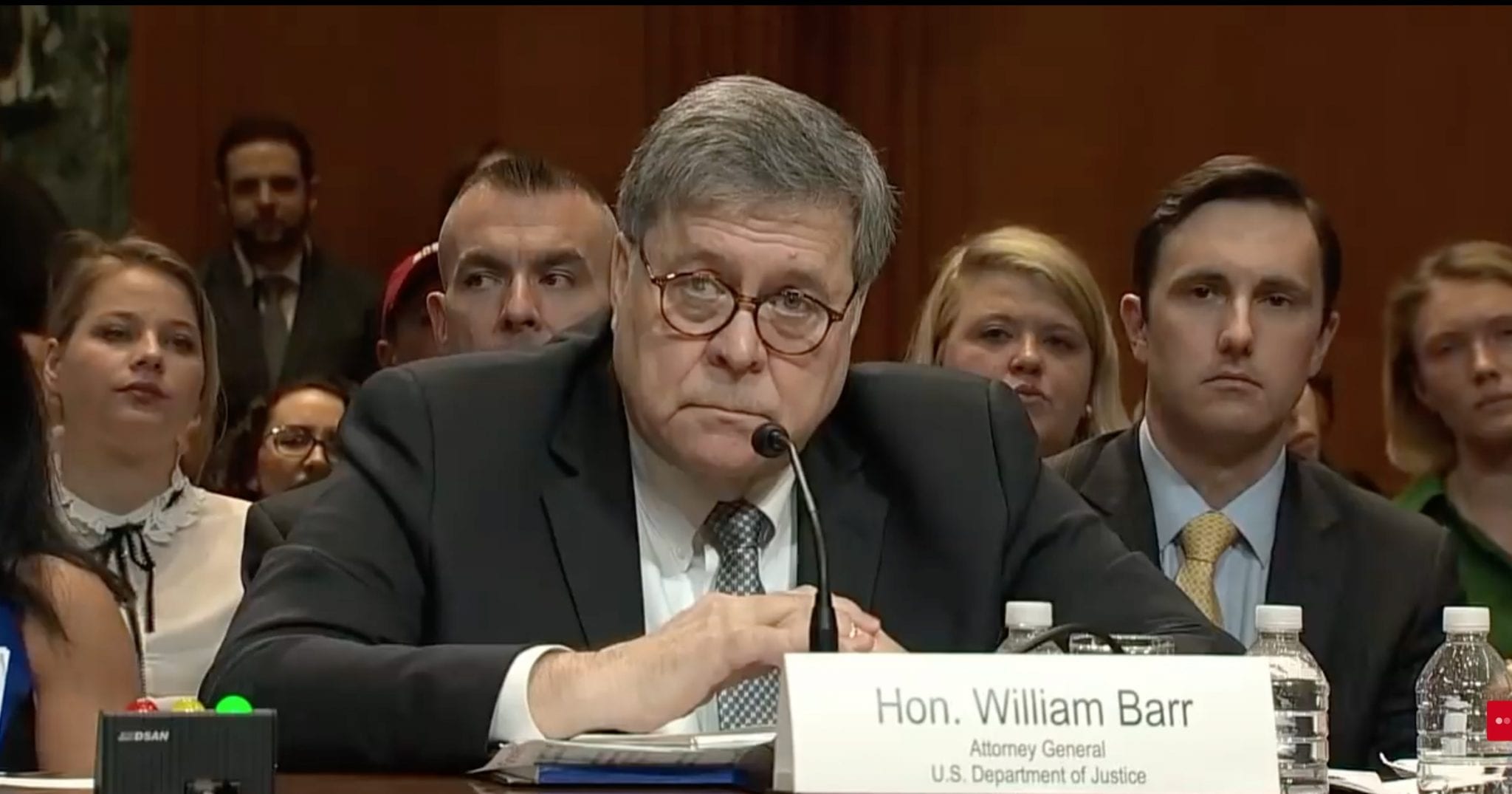 Thursday morning, the Justice Department will release the 400-page report outlining how special counsel Robert Mueller squandered $34 million to conclude that an implausible conspiracy theory was unsupported by objective evidence. Even at $85,000 per page, it’s unlikely that this document contains anything of substance that we didn’t already know after Attorney General William Barr distilled it down to 4 pages last month. Yet the Democrats and the “news” media continue their desperate attempts to keep hype alive with new conspiracy theories about a “cover-up” as well as demands to see parts of the report to which federal law forbids them access.

The DOJ has announced that Attorney General Barr and Deputy Attorney General Rosenstein will hold a joint news conference Thursday at 9:30 a.m. to discuss Mueller’s investigation. Presumably, they will attempt to make it clear — even to the “reporters” of the legacy media — why it isn’t possible to release an un-redacted copy of the Mueller report. Rosenstein’s planned presence at this news conference also suggests that they will endeavor to explain why, as Barr wrote in his March letter to Congress, “The evidence developed during the special counsel’s investigation is not sufficient to establish that the president committed an obstruction of justice offense.”

That letter has been used by the Democrats to level charges of dark doings in the Justice Department under the new Attorney General. Barr is well known in Washington, having served in a variety of high-profile DOJ positions, including Attorney General in the George H.W. Bush administration. And, until he replaced the acting A.G. in the Trump Justice Department, Barr was highly regarded by intelligent Beltway insiders across the ideological spectrum. All that changed when the Mueller report killed the collusion hoax and Barr reported that fact to Congress. Now, it would seem that Barr himself is in league with Russia, as Newsweek breathlessly reports:

This much is known: On Barr’s public financial disclosure report, he admits to working for a law firm that represented Russia’s Alfa Bank and for a company whose co-founders allegedly have long-standing business ties to Russia. What’s more, he received dividends from Vector Group, a holding company with deep financial ties to Russia.… Much of the information is public, but it has so far been unreported in relation to Barr.

Oddly, this issue was conspicuous by its absence during Barr’s confirmation hearings. At that time, the Democrats were far more interested in what they styled his “audition letter,” written in June of 2018 to Deputy A.G. Rod Rosenstein. This 19-page memorandum contained what the “get Trump” crowd saw as brazen heresy. Specifically, Barr objected to the special counsel’s demand that the President submit to an interview pursuant to possible obstruction of justice: “Mueller is proposing an unprecedented expansion of obstruction laws so as to reach facially-lawful actions taken by the President in exercising the discretion vested in him by the Constitution.”

What Barr is talking about here, if it’s not obvious, is the President’s termination of FBI Director James Comey. It’s obvious that Mueller wanted to get Trump into a room and question him about his reasons for doing so in the hope that he could somehow connect it with thwarting the investigation into alleged dealings with the Russians. Barr’s point is that it doesn’t matter why Comey was fired. If giving that weird character the boot constituted “a facially-lawful action taken by the President,” it cannot be obstruction of justice. Firing Comey isn’t the same as destroying physical evidence. Barr went on to say that Trump should not submit to any such interrogation.

This thought crime caused every Democrat on the Senate Judiciary Committee to vote against Barr. Only three Democrats voted for his confirmation in the full Senate. Since then, Barr has further incurred the wrath of the Democrats by making it clear that he plans to look into well-documented spying on the 2016 Trump campaign, including an FBI wiretap of Carter Page as well as surveillance of George Papadopoulos and Sam Clovis. This inevitably resulted in denunciations by the Senate Minority Leader Chuck Schumer and House Speaker Nancy Pelosi. The latter brayed, “I don’t trust Barr.” The “news” media dutifully chimed in with Barr’s alleged Russia connection:

On his financial disclosure report, Barr notes that he earned anywhere from $5,001 to $15,000 in dividends from the Vector Group.… The company’s president, Howard Lorber, brought Trump to Moscow in the 1990s to seek investment projects there. The trip is widely seen as the first of many attempts to establish a Trump Tower in Moscow.… Lorber has extensive ties to Russia.

Wow… Barr had stock in the Vector Group and earned a whopping $5001 to $15,000. Quite a haul, eh? That’s almost enough to buy a used car (as long as you don’t insist on a drive train warranty). And what about all those nefarious ties with Alfa Bank? Barr was employed by a law firm, Kirkland & Ellis LLP, which occasionally represented that particular financial institution. During his two years at that firm, Barr earned about $500K annually. This is not minimum wage but it isn’t exactly a killing these days for a heavy hitter whose résumé includes the title, U.S. Attorney General. And there’s one more minor inconvenience with this heinous catalogue of crime:

Investigators found no evidence that the Trump Organization had communicated with Alfa. Still, the bank is partially owned by Russian oligarch German Khan, whose son-in-law, the London-based lawyer Alexander van der Zwaan, was indicted by special counsel Robert Mueller for lying to investigators about a report his firm had written for Trump’s former campaign manager Paul Manafort.

So, just to make sure you followed that: Barr once worked for a law firm that represented a bank with which the Trump campaign had no dealings. And this constitutes a conflict of interest because the son-in-law of a “Russian oligarch” (who evidently owns shares in the bank) was indicted for lying to investigators about a report he had written for Paul Manafort at a time when the latter was not connected to the Trump campaign. And the editors of the “news” outlet that published this shaggy dog story actually believe it means “Barr’s potential conflicts could face further scrutiny as Democrats in Congress fight to have the Mueller report released to the public.” Really?

If this is the best the Democrats and the media can do to damage Attorney General Barr’s credibility, they had better give up the “get Trump” routine and go back to what they do best — moronic policy proposals like the Green New Deal, Medicare for All, open borders, sanctuary cities, reparations, gun control, infanticide, lowering the voting age to 16, free college tuition for everyone, a guaranteed income for people who can’t be bothered to work, ad infinitum. If the Democrats are betting on the demise of Attorney General William Barr and crazy demands to see redacted portions of Mueller’s $34 million report to keep the Russia hype alive, President Trump wins.