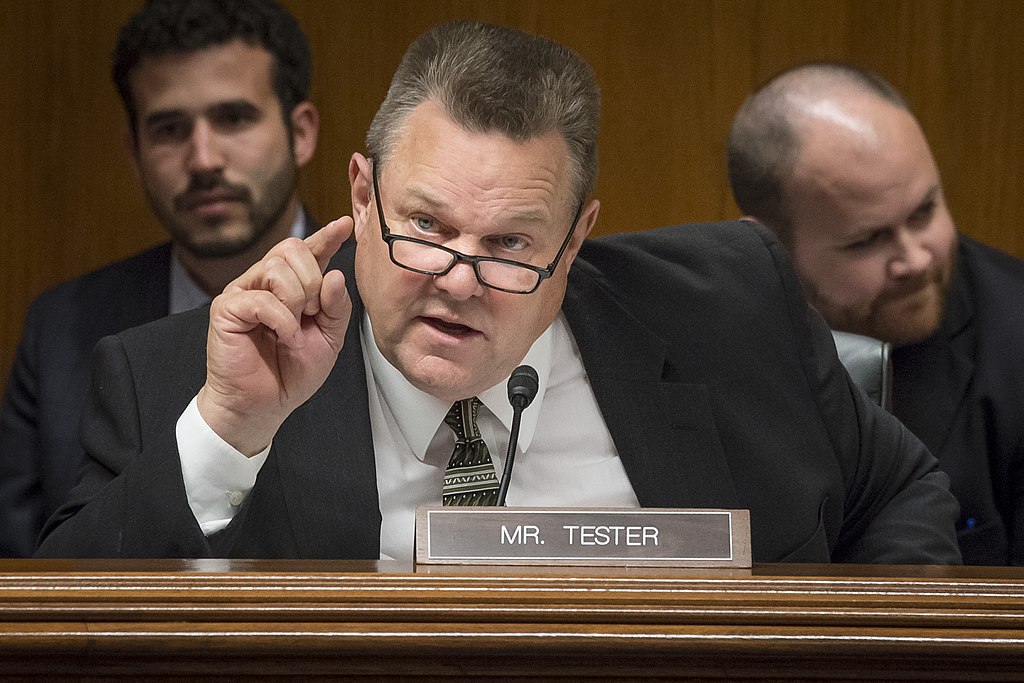 Montana is one of those Western states with quirky electoral preferences and a history of splitting tickets. Small but divided Congressional delegations, governors in the opposing party at odds with state legislature majorities, deep red rural counties and bright blue urban ones, especially if those little cities are college towns (in Montana, Bozeman and Missoula). So the current Jon Tester-Matt Rosendale U.S. Senate contest is typical of this political milieu.

In 2016, Donald Trump carried Montana by 20 percentage points. Trump’s messages to Treasure State voters were simple: Hillary Clinton wants to take your guns away, and she wants to continue Barack Obama’s policies of closing off more federal land to “multi-use” (logging, mining, energy development, livestock grazing, hunting, fishing, etc.). In rural Montana, Hillary was about as popular as brucellosis.

Jon Tester, 62, was born in Havre, Montana, and has lived most of his life in nearby Big Sandy. He comes from three generations of wheat farmers. At the age of nine Tester lost the three middle fingers of his left hand to a meat grinder while working in his mother’s family butcher shop. This accident didn’t stop him from earning a degree in music from the University of Great Falls, a small Catholic institution (originally called Providence College). He was a high school music teacher (Tester is a proficient trumpet player, and is competent on other brass instruments and the violin) and wrestling coach in Big Sandy, where one of his students was future Pearl Jam bassist Jeff Ament (more on that later).

After serving eight years in the Montana State Senate, including a two-year stint as its president, Tester was elected to the U.S. Senate in 2006 after beating the late Republican Conrad Burns in a close race. And he was reelected in 2012 after prevailing against GOP Congressman Denny Rehberg.

Again, Tester is one of those talented red state Democrats, who, despite voting blue on most issues, manages to walk a fine line with his more independent-minded constituents. For instance, he maintains an “A” rating from the NRA on Second Amendment-related legislation. One of his campaign ads shows him driving down a dirt road in an old pickup truck with a rifle on a gun rack behind him. Montanans recognize these optics as the M.O. of ex-Governor Brian Schweitzer, a Democrat fond of depicting himself as a hunting sportsman. The pose is not new, and seems to work. Will it continue to work now that he’s issued full-throated opposition to Brett Kavanaugh’s nomination?

Tester’s opponent, Matt Rosendale, 58, a Kavanaugh supporter from the start, is a Maryland transplant and graduate of Chesapeake College, who came to Montana in 2002. He was elected to a Montana House of Representatives seat in 2010 and a State Senate seat in 2012. Rosendale currently serves as Montana State Auditor, a job he was just elected to in 2016. He initially moved a successful real estate career to Montana, where he now resides with his wife on a ranch near Glendive in the eastern part of the state. The ranch is an object of “All hat, no cattle” derision from the Tester camp because it’s a residence rather than a working livestock operation. Indeed, Montana Democrats like to portray Rosendale as a carpetbagger with shady business dealings in his past, but he seems to have well established himself in the political life of the state in a relatively short time.

Early on, the polls had the two-term incumbent Tester ahead by double digits. Some are now tightening to within the margin of error a little more than a month before Election Day. One recent poll has Rosendale actually ahead of Tester. This may be due to the fact that President Trump has devoted two stops (recent visits to Great Falls and Billings) of his 40-date “Motivate-the-Republican-Base 2018 Tour” to assist the GOP insurgent’s campaign. The president is especially critical of Tester due to the latter’s smear of ex-White House physician Dr. Ronny Jackson, who had been Trump’s ill-fated nominee to replace David Shulkin as Secretary of Veterans Affairs. Tester accused Jackson of professional mismanagement and drunkenness while on administration business, though the Secret Service cleared Jackson of the latter charge.

I pick up three Montana television stations here in Salmon, Idaho, and as always, election year political ads are ugly. According to the Rosendale campaign, Tester is a Schumer-Pelosi liberal who has enriched himself as a Washington swamp creature after initially running two terms ago as a candidate touting fiscal accountability, and “immune” from K Street influence. Though a recent AP story marks Tester as occupying the number one slot for Senate campaign lobbyist donations in 2018 at $394,478. In one ad there is a shot of Tester’s DC home, which seems to resemble a small castle. Rosendale, on the other hand, is depicted by the Tester campaign as an underhanded ex-real estate developer (shades of Trump), who wants to close off access to public lands in Montana to the detriment of regular citizens who have a right to enjoy such recreational pastimes as hunting, fishing, and hiking. Rosendale is also attacked by typical liberal fearmongering about cutting social services to vulnerable children and the elderly, etc.

Then there is the Pearl Jam poster controversy, ignored by most of the media, except locally in Montana, and one Fox News story. The Rosendale campaign exploited it with a biting anti-Tester ad.

On August 13 the rock group Pearl Jam gave a concert at the Adams Center in Missoula as an unofficial get-out-the-vote event for Tester, who was not present. Pearl Jam bassist Jeff Ament is a friend of the senator and was a former student of Tester’s in the latter’s role as a high school music teacher. Ament commissioned an artist named Bobby Brown to design a poster to advertise the show.

The poster, which was printed and distributed, featured a lurid scene with a burning White House and a depiction of the president supine (one would assume dead) in the foreground and being pecked at by an American bald eagle, the national symbol. Also shown in this weak parody of the 1960s underground comic book genre is Tester piloting a flying tractor over the blazing Executive Mansion, and a grotesque-looking Rosendale waving a flag that simply reads “Maryland.” Ament is quoted on social media: “The role of the artist is to make people think and feel, and the current administration has us thinking and feeling. I was the sole conceptualist of this poster, and I welcome all interpretations and discourse. Love from the First Amendment, Jeff Ament.” Tester spokesman Chris Meagher told AP the campaign “doesn’t like the poster, and doesn’t condone violence of any kind.” But there was never a statement from Tester himself.

As of this writing, the Brett Kavenaugh controversy rages on. Jon Tester, being one of those red state Senate Democrats walking a tight rope, has now committed to cast a vote in the matter that may come back to haunt him on Election Day. The Tester-Rosendale race being typical of others in our time of hyper-partisan politics, unfortunately so.