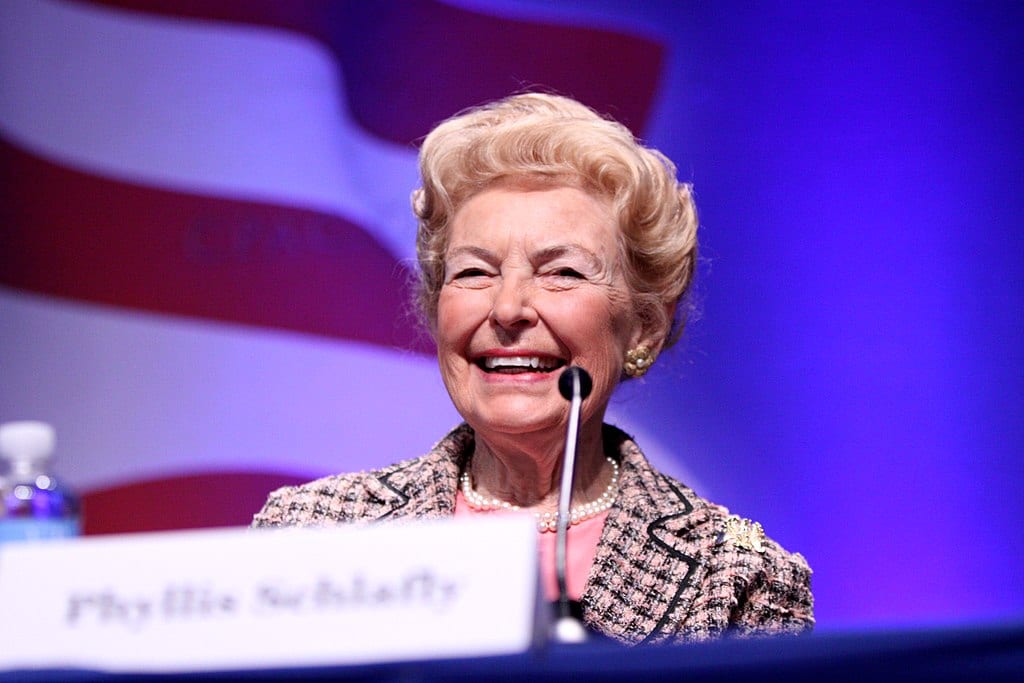 Hollywood has established it is no friend to traditional family values. It thus comes as no surprise that its producers have taken it upon themselves to revise history and misrepresent my late boss Phyllis Schlafly, the mother of the modern conservative movement. In the FX on Hulu series Mrs. America detailing Phyllis’s defeat of the so-called Equal Rights Amendment, Hollywood’s liberal bias is on full display.

As feminists would like you to believe about all married women, Phyllis is portrayed as an oppressed housewife, subservient to her husband Fred, with no decision-making ability of her own. Phyllis and Fred shared a wonderful marriage of 42 years that was full of joy and partnership — not the bitter competitiveness and heated disagreements FX has chosen to portray on screen.

I never had the opportunity to meet Fred, but I recall Phyllis fondly sharing stories about him and the life they had together. In fact, she was quite pleased to answer all of my questions about their early life and marriage. Any time Phyllis talked about Fred, you could expect to see her grinning from ear to ear.

She was passionate about her life’s work. She believed that God had called her to make a difference and she was committed to His calling.

Another blatant fallacy of Mrs. America is its portrayal of Phyllis as jealous over her contacts and network. This is simply untrue! Phyllis spent all her years encouraging and empowering her followers and fellow activists. They also depict her as puffed up about her own “political profile in D.C.” — an ego the real Phyllis Schlafly never exhibited.

Phyllis always acted with humility and class. She knew that the Equal Rights Amendment would harm women, and she was willing to take assistance from anyone who could help put a stop to the oncoming train wreck. She equipped homemakers who wanted to assist the cause by teaching them how to organize, influence, and speak about their issue. It was far more important to Phyllis that the work get done than who received the credit.

One of the most glaring historical revisions in the show is a 1974 debate depicted between Fred and Phyllis Schlafly and Marc and Brenda Feigen-Fasteau. While this debate took place in real life, the show’s portrayal is completely made up.

In Mrs. America’s fantasy, Brenda catches Phyllis making up a custody court case in Washington, D.C., leaving the show’s naive Phyllis speechless and ignorant. It’s precisely how liberals want conservatives to appear, but it’s precisely wrong when it comes to Phyllis Schlafly. That exchange did not take place — nor did Phyllis ever falsify a case.

I was privileged to sit by Phyllis’s side for many years and through many interviews. Not one time did I see her without an answer or making up a fact. Indeed, it was quite the opposite. Phyllis was always prepared with a factual response, and the other side could never outsmart her — much to their chagrin.

In the same fictitious debate scene, Brenda alleges that Phyllis is not a real housewife, but a “full-time lobbyist working to defeat the ERA.” This is another lie from Hollywood and a frequent lie of the feminists. The truth is that Phyllis felt so strongly about the cause that she served in a volunteer capacity and never took a paycheck from her organization.

Contrary to what the series wants you to believe, Phyllis remained committed to her husband and children while traveling the country to speak at rallies, debates, and hearings. In a 1978 Good Morning America interview with Fred and Phyllis, she told the host, “You talk about these other things that I have done and some of them have had pleasurable aspects to them, but really, nothing is as much fun as a happy long-time marriage and the fun of growing children. It really is more fun than all these other things I do.”

Feminists believe no married woman can really be liberated, but Phyllis (and so many others) proved that was not true. She strongly believed family was the bedrock of society, and she never abandoned her own even while she changed the course of history. Phyllis always said, “I had it all, just not all at once.”

She was passionate about her life’s work. She believed that God had called her to make a difference, and she was committed to His calling. Because of her leadership, women across the country were mobilized and accomplished what seemed impossible.

Thanks to Hollywood, we have been given the opportunity to share the truth about Phyllis Schlafly with a new generation. She was an articulate voice, a powerful debater, and a relentless advocate for truth. She defeated the ERA — the crown jewel of the radical feminist movement. Her exemplary efforts to rally the grassroots and advance conservatism will never be forgotten.