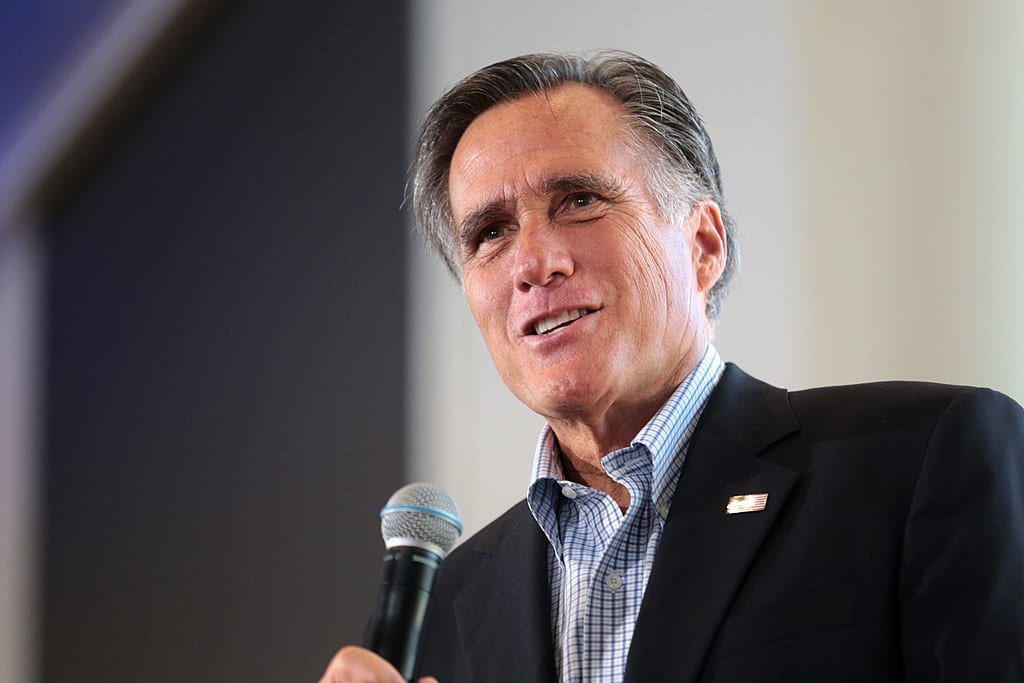 Not yet sworn in as Orrin Hatch’s successor as a Republican Senator from Utah, Romney is already virtue signaling to the Washington Swamp that yes, indeed, he is one of them.

And you wonder why he lost the presidency?

Heading straight for the anti-Trump pages of the Washington Post, the headline on Romney’s New Year’s Day Op-Ed was this:

The president shapes the public character of the nation. Trump’s character falls short.

Without the slightest sense of self-awareness that he is about to demonstrate his own lack of character, Romney proceeds to illustrate exactly why he lost the presidency and just how shallow Swamp Republicans really are.

Among the jewels in this Romney virtue signaling piece were these:

To a great degree, a presidency shapes the public character of the nation. A president should unite us and inspire us to follow ‘our better angels.’ A president should demonstrate the essential qualities of honesty and integrity, and elevate the national discourse with comity and mutual respect. As a nation, we have been blessed with presidents who have called on the greatness of the American spirit. With the nation so divided, resentful and angry, presidential leadership in qualities of character is indispensable. And it is in this province where the incumbent’s shortfall has been most glaring.

The world is also watching. America has long been looked to for leadership. Our economic and military strength was part of that, of course, but our enduring commitment to principled conduct in foreign relations, and to the rights of all people to freedom and equal justice, was even more esteemed. Trump’s words and actions have caused dismay around the world. In a 2016 Pew Research Center poll, 84 percent of people in Germany, Britain, France, Canada and Sweden believed the American president would “do the right thing in world affairs.” One year later, that number had fallen to 16 percent.

Where was Mitt Romney in the 1980s, when these kind of things were being said about Ronald Reagan? Historian and Reagan biographer Craig Shirley tweets this:

Romney has a habit of knocking Republican presidents. He also bashed Reagan hard in 1984 in the middle of the re-election campaign.

What is completely unsurprising is Romney’s failing memory when it comes to recalling that the essence of his Op-Ed about Trump — saying that “I do not intend to comment on every tweet or fault. But I will speak out against significant statements or actions that are divisive, racist, sexist, anti-immigrant, dishonest or destructive to democratic institutions” is exactly the kind of intellectual claptrap that was said in the day about Reagan. Let’s recall, as noted in this very space in 2015 (“Yes, Trump Can Win” was the title) when all the naysayers were ridiculing Trump’s candidacy and insisting he could never win, that once upon a time the icons of the GOP Establishment of the day were saying things like this about Reagan:

• Vice President Nelson Rockefeller dismissed Reagan as “a minority of a minority” who “has been taking some extreme positions.”

• New York’s Republican Senator Jacob Javits: Reagan’s positions are “so extreme that they would alter our country’s very economic and social structure and our place in the world to such a degree as to make our country’s place at home and abroad, as we know it, a thing of the past.”

• Illinois Republican Senator Charles Percy said Reagan’s candidacy was “foolhardy” and would lead to a “crushing defeat” for the Republican Party. “It could signal the beginning of the end of our party as an effective force in American political life.”

• Former President Gerald Ford: “I hear more and more often that we don’t want, can’t afford to have a replay of 1964.” If the Republican Party nominates Ronald Reagan “it would be an impossible situation” because Reagan “is perceived as a most conservative Republican. A very conservative Republican can’t win in a national election.” Asked if that meant Ford thought Reagan can’t win, Ford replied to the New York Times: “That’s right.” The Times story went on to observe that Ford thought “Mr. Reagan would be a sure-loser in November” and that Reagan held “extreme and too-simple views.”

As with Mitt Romney today, the comments from Ford and Rockefeller were the “wisdom” of people who tried and failed to win the presidency — which Reagan would go on to do in two massive landslides.

Trump is divisive? Here’s this on Reagan as noted by biographer Steven F. Hayward in The Age of Reagan: The Conservative Counterrevolution 1980-1989:

It became fashionable during the contentious presidency of George W. Bush for some liberals to wax nostalgic about Reagan, but during Reagan’s time in office the Left hated Reagan just as lustily as they hated Bush, and with some of the same venomous affectations, such as the reductio ad Hitlerum. The key difference is that there was no Internet during Reagan’s years with which to magnify these derangements, and the twenty-four-hour cable TV news cycle was in its infancy. But the signs were certainly abundant. In 1982 Madame Tussauds Wax Museum in London held a vote for the most hated people of all time, with the result being Hitler, Margaret Thatcher, Ronald Reagan, and Dracula. A Democratic congressman, William Clay of Missouri, would charge that Reagan was “trying to replace the Bill of Rights with fascist precepts lifted verbatim from Mein Kampf.”

… Eddie Williams, head of what the Washington Post describedas “the respected black think tank, the Joint Center for Political Studies,” reacted to Reagan’s (1980) landslide thus: “When you consider that in the climate we’re in — rising violence, the Ku Klux Klan — it is exceedingly frightening.”

… Los Angeles Times cartoonist Paul Conrad drew a panel depicting Reagan plotting a fascist putsch in a darkened Munich beer hall. Claremont College professor John Roth wrote: ‘I could not help remembering how forty years ago economic turmoil had conspired with Nazi nationalism and militarism — all intensified by Germany’s defeat in World War I-to send the world reeling into catastrophe…It is not entirely mistaken to contemplate our post-election state with fear and trembling.’ Harry Stein wrote in Esquire that the voters who supported Reagan were like the “good Germans” in “Hitler’s Germany.”

On and on went this kind of garbage in the Reagan era — not to mention during the George W. Bush presidency as well. Reagan and Bush 43 were depicted just as Romney says of Trump: “divisive, racist, sexist, anti-immigrant, dishonest or destructive to democratic institutions.”

And oh yes, so was Mitt Romney thus depicted in 2012. Recall these gems?

Here is Romney the accused racist:

At least one Republican is very concerned about Mitt Romney’s Mormon faith.

Steven Showers, 59, has erected a 14-foot-high, neon sign saying that Romney is a racist who will doom the GOP. The flashing monument on Showers’ Southern California front lawn pleads with passerbys to “Save the GOP” from “Romney’s racist heart.”

Here is the divisive Romney:

So, now we know that, in Mitt Romney’s worldview, half of the country consists of people who are helplessly addicted to government services. They don’t pay taxes and are so utterly dependent on the government that they are “victims,” who mindlessly cleave to Barack Obama’s presidency.

Here is the sexist Romney, so-called because of his “binders full of women” comment in terms of potential administration appointees:

Romney is the quintessential ambivalent and “benignly paternalistic” sexist….

There was this headline:

Gloria Steinem snapped that Romney “is the most destructive to equality candidate I’ve ever seen.”

And let’s not forget the dishonest Romney:

DES MOINES, Iowa — Appearing on NBC’s “Meet the Press,”Mike Huckabee called Mitt Romney a dishonest politician who can’t be trusted with the presidency, turning up the heat Sunday in a close-and-getting-closer Republican race in Iowa.

“If you aren’t being honest in obtaining the job, can we trust you if you get the job?” Huckabee asked.

He accused Romney of running “a very desperate and, frankly, dishonest” campaign against himself and rival John McCain.

So there you have it. According to his critics, Mitt Romney is exactly as he accuses Trump: “divisive, racist, sexist, anti-immigrant, dishonest or destructive….”

Perhaps the question then is, should Romney resign if he is exactly as he accuses the President?

The only person who is damaged by this Mitt Romney Op-Ed is — Mitt Romney.

The chair of the Republican National Committee read the Romney Op-Ed and tweeted out:

POTUS is attacked and obstructed by the MSM media and Democrats 24/7. For an incoming Republican freshman senator to attack @realdonaldtrump as their first act feeds into what the Democrats and media want and is disappointing and unproductive.

The delicious part of that tweet? Chairwoman Ronna Romney McDaniel is the niece of Uncle Mitt.

Which goes to show that at least one person in the Romney clan has political smarts — not to mention common sense.