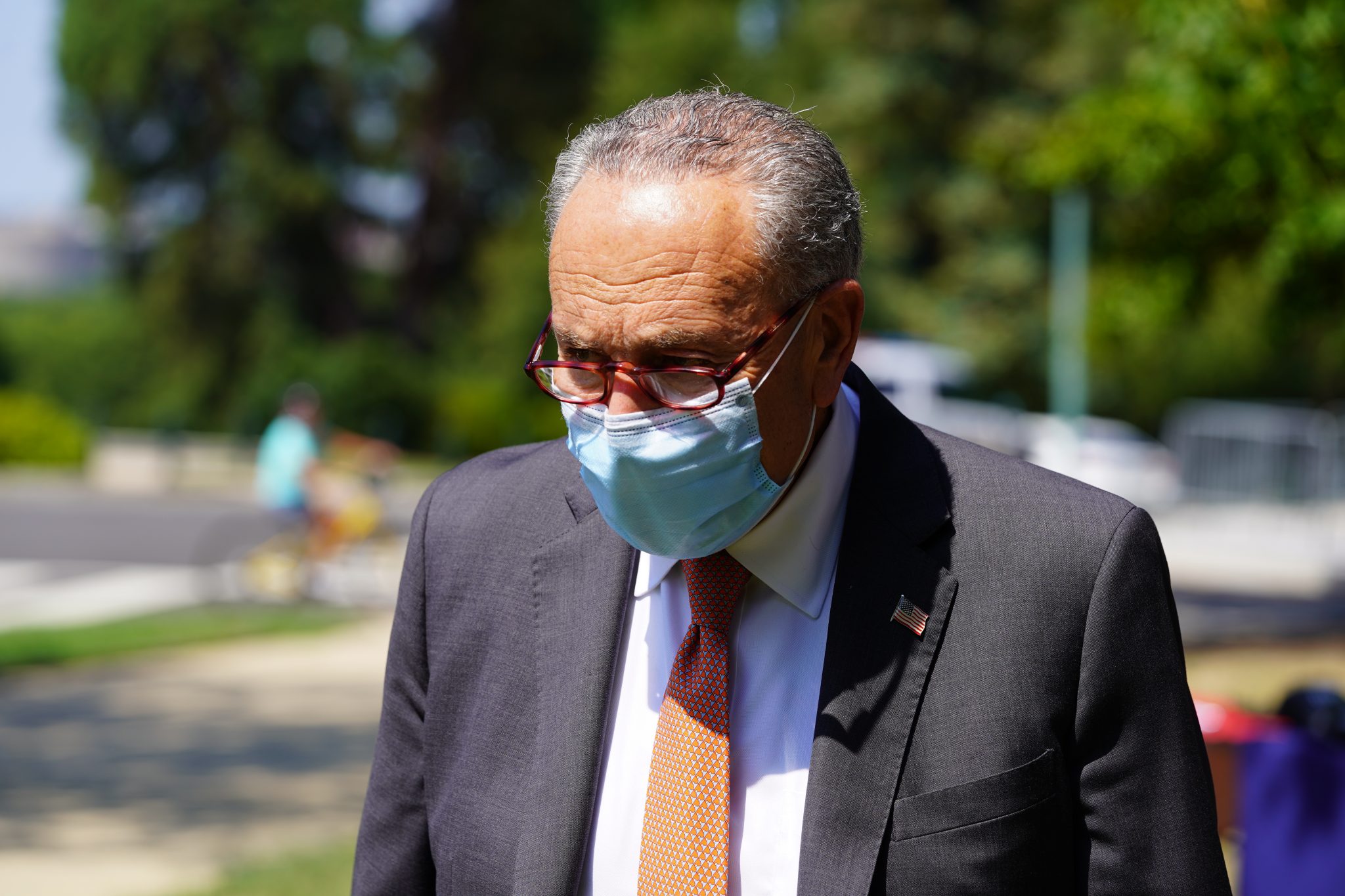 Donald Trump on Saturday unveils his nomination to the U.S. Supreme Court, the third of his presidency. Credit a man who looks like the undertaker but acts like the corpse for the more expressive, energetic politician picking three justices instead of one.

Mitch McConnell played a 12 into a 21 after the February 2016 death of Antonin Scalia. Faced with a nominee moderate by the standards of recent justices placed on the bench by Democratic presidents, the Senate majority leader opted to block Merrick Garland on the assumption that the Republican presidential nominee would win in November 2016. Few predicted that, and fewer still essentially put as valuable a wager on that outcome as McConnell did. Given the likelihood of Hillary Clinton winning and then nominating someone more extreme than Garland, McConnell risked high stakes. Gamblers who win the big pot so often do. Instead of Merrick Garland, Neil Gorsuch sits on the U.S. Supreme Court. Mitch McConnell did that.

Now, rather than acquiesce to a hobgoblins-of-small-minds consistency, McConnell pushes a Republican nominee during an election year to likely give Donald Trump the most Supreme Court appointments during a presidential term since Richard Nixon’s first administration. Yes, the difference between Barack Obama in 2016 and Donald Trump in 2020 pertains to divided government, which in election years witnesses a rejection rate of Supreme Court nominees of 90 percent just as a unified Senate and presidency see a confirmation rate of almost 90 percent. But more so, it reflects the recognition that Democrats consistently behave as bad-faith actors on the judiciary.

Does Harry Reid regret invoking the nuclear option to block filibusters on lower court judicial appointments? McConnell thought he would at the time when he said, “Some of us have been around long enough to know the shoe is sometimes on the other foot.” When it was in 2017, McConnell expanded Reid’s rule change to Supreme Court justices. And what about the Biden Rule? As Senate Judiciary chairman, the current Democratic presidential nominee said in 1992, “Once the political season is underway, and it is, action on a Supreme Court nomination must be put off until after the election campaign is over.” McConnell followed that decree in 2016. But in 2016, the then–vice president issued a codicil to the Biden Rule: “Deciding in advance simply to turn your back before the president even names a nominee is not an option the Constitution leaves open. It’s a plain abdication from the Senate’s duty.” Mitch McConnell now follows that 2016 decree.

The education of Mitch McConnell dates back more than a half century. He worked on Capitol Hill when the Democrats borked Nixon nominees Clement Haynsworth and Harrold Carswell. And he served as a freshman senator when they transformed the staid, Ivy League intellectual Robert Bork into an Inherit the Wind hayseed who intentionally botched back-alley abortions when not burning crosses. He witnessed the politics of personal destruction practiced on Clarence Thomas and Brett Kavanaugh, deemed the leader of a gang of gang rapists by a client of Michael Avenatti (a former Democratic presidential aspirant currently under house arrest) whose wild accusation became fodder for Democrats to try to derail confirmation hearings. On Thursday, he woke up to a crowd banging cowbells, pots, and pans, screaming “wake the f— up” through megaphones, and chalking “Traitor Mitch” and “Moscow Mitch” (the D.C. police ignored their established precedent of arresting chalk graffitists) on the sidewalk in front of his residence.

McConnell knows the other side plays hardball. So he plays that game instead of tiddlywinks.

Of the 20 open seats since Lyndon Johnson’s appointment of Thurgood Marshall in 1967, Republican presidents hold a 16-4 advantage over Democrats in placing jurists on the high court. This advantage paradoxically brought the country Roe v. Wade, Obergefell v. Hodges, Kelo v. New London, and National Federation of Independent Businesses v. Sebelius. The greater propensity to impose an ideological litmus test on nominees by Democrats results in more borkings and narrower margins for confirmation for Republican nominees (the only four Democratic nominees during that 53-year period received an average of 78.5 votes and the last four Republican nominees received an average of 60 votes). Paranoia regarding the confirmation process results in Republican presidents nominating liberal judges regarded as more palatable to Democrats. Republican nominees reliably counted on to vote with the court’s liberal wing include Harry Blackmun, John Paul Stevens, and David Souter. Democrat nominees offer no such surprises or even Sandra-Day-O’Connor-Anthony-Kennedy-John-Roberts swing votes.

Projection characterizes Democrats on the Supreme Court. “Leader McConnell has defiled the Senate like no one in this generation,” Chuck Schumer said this week, “and Leader McConnell may very well destroy it.”

This comes from the same guy who sought to derail hearings against Brett Kavanaugh over allegations that he oversaw an organized, gang-raping outfit that terrorized the women of the Washington, D.C., area as a teenager during the 1980s that fell under everybody’s radar until the jurist found himself nominated to the Supreme Court. “There are now multiple, corroborated allegations against Judge Kavanaugh, made under penalty of perjury, all of which deserve a thorough investigation,” Schumer maintained in 2018. Earlier this year, Schumer sought to intimidate Supreme Court justices. “I want to tell you Gorsuch, I want to tell you Kavanaugh,” he announced on the Supreme Court steps, “you will pay the price. You won’t know what hit you if you go forward with these awful decisions.” During the Bush presidency, Schumer described himself as “the leader of the filibuster movement” and “proud of it.” When Barack Obama replaced Bush, Schumer eagerly pushed to do away with the filibuster for most judicial appointments.

Schumer now pays the price for acting in bad faith. His counterpart from Kentucky cited several of the aforementioned examples in an important speech this week that labeled the Senate minority leader “uniquely a non-credible messenger when it comes to the Senate’s role in judicial confirmations.” McConnell scoffed at Democrat “revisionist history lectures,” “performance outrage,” and “threats.”

These threats — Schumer says “nothing is off the table” after Democrats pushed court-packing in response to Trump filling this empty seat — seem particularly empty. Not only does the party threatening court-packing boast neither a majority in the Senate nor the presidency, but the last time it attempted this, more than 80 years ago, it failed despite effectively owning a 4-1 majority in the Senate and coming off a landslide presidential win that saw its candidate take every state save for Vermont and Maine. Chuck Schumer has a will. He lacks a way.

If Republicans rejoice that a figure as sober rather than one as smarmy that even his hairline lies leads their caucus, then they rejoice as loudly that Mitch McConnell chose to play Mitch McConnell and not Howard Baker or Bob Dole as the party’s Senate leader. With his pick Saturday, Donald Trump must decide to forgo Gerald Ford or Richard Nixon imitations lest he make McConnell’s work all for naught.