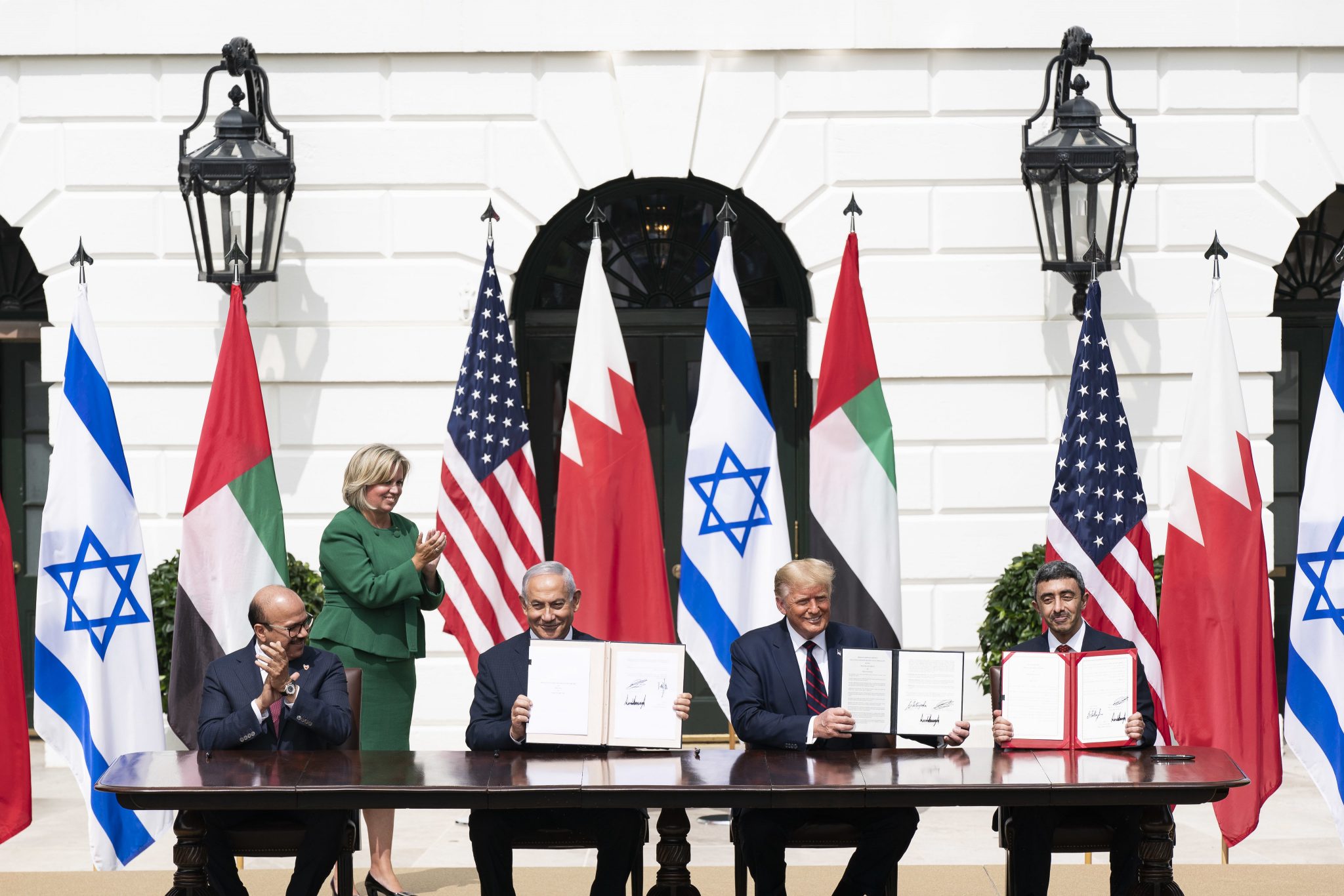 I interviewed Dr. M. Zuhdi Jasser in January 2017, July 2017, September 2018, May 2019, and February 2020 on a range of topics including Islamism and what he believes is its antidote, the Muslim Reform Movement. This is a follow-up interview, in which Jasser and I discuss Middle East peace and Islamist terrorism in Europe, among other things.

Jasser is president and founder of the American Islamic Forum for Democracy (AIFD), co-founder of the Muslim Reform Movement (MRM), and author of A Battle for the Soul of Islam: An American Muslim Patriot’s Fight to Save His Faith. He is a practicing Muslim.

He is also an active physician and former U.S. Navy officer whose parents fled Syria in the 1960s, the host of the Blaze Radio Podcast “Reform This!,” and founder of TakeBackIslam.com. 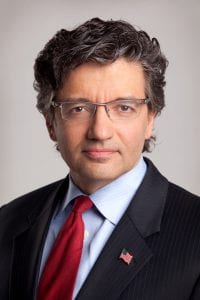 Postal: Georgetown’s Bridge Initiative, the Center for American Progress’ Fear, Inc., and the Council on American-Islamic Relations associate with you with “Islamophobia.” How do you respond to such accusations?

Jasser: We at the AIFD and the MRM have been dedicated to long-overdue reforms against Islamism (political Islam) and its propagandists. I have spoken at length about the differences between Muslim reformers and Muslim Islamists in our first interview. I reject the term “Islamophobia.” It is a mechanism used by Islamist movements and regimes to prevent criticism of Islamism. Islam has yet to go through an enlightenment and reform against theocracy and for individual liberty and universal human rights. The dominant “establishment” of the Muslim community in the West and abroad supports Islamism and its believers, the Islamists. The Muslim reformers, on the other hand, believe that freedom and universal human rights should ultimately prevail.

Those at the Bridge Initiative, “Fear, Inc.,” and Muslim Brotherhood legacy groups like Council on American-Islamic Relations (CAIR), Islamic Society of North America (ISNA), Islamic Circle of North America (ICNA), Muslim Students Association (MSA), and Muslim Public Affairs Council (MPAC) do not accept that devout Muslims exist who reject their ideas. Instead, such groups attack us as anti-Islam and blasphemers. Like theocrats, Islamists and their sympathizers see faith as monolithic and do not tolerate diversity of interpretation.

Postal: According to NPR, 35 percent of Muslims voted for President Trump in November. And according to NBC shortly before the election, 78 percent of eligible Muslim voters were registered to vote, up from 60 percent in 2016. To what do you attribute these statistics?

Jasser: The NPR statistic is very revealing on a number of levels. I covered this in depth in my weekly podcast of “Reform This!” that week. Essentially, American Muslims reject the Obama–Biden policies that fueled Iran’s proxy wars across the Middle East and deepened sectarian conflicts between Sunni and Shia radicals. Many American Muslims see that Islamism has destroyed the Middle East and were tired of the Obama–Biden administration’s appeasement of Islamists.

However, the Muslim Brotherhood in the West is more of an amorphous, underground idea with front groups and ideologically sympathetic travelers. Shutting down legacy Brotherhood groups in the West is a slippery slope that harms free speech. Instead, we need to defeat the Brotherhood’s bad ideas with better ideas. Closing Brotherhood affiliates by force will only empower Islamists.

Postal: In 2020 alone, there were at least five Islamist terrorist attacks in Europe: three in France (stabbing in Paris, leaving two wounded; teacher beheading in a suburb of Paris; and stabbing in Nice, killing three), one in Germany (stabbing in Dresden, killing one and wounding another), and one in Austria (four dead, 22 injured in Vienna shooting). Why is Europe in the situation it is now?

Jasser: Europe has always had bad Muslim immigration policy, and this worsened after the mass immigration from Syria since 2011. The cultural, social, political, and religious shock to Europe is massive. Even if we conservatively estimate that 10 to 20 percent of these immigrants sympathize with ISIS while 30 to 40 percent are sympathetic to nonviolent Islamism and reject the social contract of Western secular liberal democracies, this combined population of militant and non-militant Islamists are insurgents. Security agencies have claimed that there are too many flagged individuals to follow. It is hard for me to understand why this hasn’t led to European countries reevaluating their immigration policies to better screen for Islamists.

But the best weapon against Islamists is non-Islamist Muslims. European governments must create partnerships with Muslim communities to marginalize Islamists. The European governments must work with non-Islamist Muslims to equip them with four things: patriotism to the nation state, a liberal education, critical thinking against tribalism, and faith and morality not in conflict with the above. The goal is to create Muslims that would want to serve and die for their nations, not jihad. If young French, German, Swedish, or Austrian Muslims are not positively engaged, the Islamists will fill that void.

Postal: French President Emmanuel Macron has waged war on “Islamist separatism” while supporting citizens’ right to draw cartoons of Mohammed under freedom of speech. What are your thoughts on Macron’s approach?

Macron has been great at diagnosing but horrible at treating the disease of Islamism. Macron must enfranchise reform-minded Muslims and resist implementing illiberal draconian measures. The nations of Europe must protect themselves from Islamist insurgents and their violence, but not at the expense of Europe’s core values and social contracts.

Chancellor Sebastian Kurz in Austria also diagnosed the problem correctly as “political Islam,” but seeks to criminalize thought by criminalizing Islamism itself. This approach is not only illiberal and counterproductive but demonstrates to Islamists that the West is authoritarian.

The best way to counter nonviolent Islamism is with good ideas. Pushing Islamism underground empowers its supporters, as Egypt, Iran, Russia, and Syria have learned. The American approach, which allows hate speech as long as it does not promote imminent acts of violence (as per Brandenburg v. Ohio) is the most rational and effective approach. But those who advocate for terrorist acts should be arrested.

Postal: Your organization, American Islamic Forum for Democracy, released a statement praising the Israel–UAE peace deal. What are your thoughts on the Abraham Accords?

Jasser: The Abraham Accords are the first genuine reforms within the Muslim world against Islamist anti-Zionism and anti-Semitism, with the UAE and Bahrain paving the way. Across the UAE and Bahrain, imams acknowledged the need to recognize the state of Israel and reject anti-Zionism, and respect Jews and Judaism. We saw Arab leaders and journalists go from being blind supporters of the Palestinian cause to criticizing the Palestinian leadership for its failures and radicalization of its people.

Postal: Rumors abound that Saudi Arabia and even Qatar could be next in making peace with Israel. Is durable peace possible between Israel and Saudi Arabia and Qatar, or are there irreconcilable differences?

Jasser: I see durable peace between Israel and Saudi Arabia possible. The Islamist threats to Saudi Arabia including populist Sunni Islamism, ISIS, al Qaeda, and Shia Islamism have shaken the foundations of the Saudi state and forced it to reckon with the Islamist monster that it created. This pivot has also pushed the Saudi state closer to Israel. While the Trump administration was critical to this, true, durable peace will occur only when the Saudi establishment genuinely reinterprets the anti-Semitic interpretations of the Qur’an and Hadith that it has propagated for years.

As for Qatar, we should close our base there and find other options for our regional security. Its ownership of Al Jazeera, which has peddled Holocaust denial, and its relationships with Iran and Turkey render it incapable of being an ally of the United States. The Al-Thani royal family also supports the Muslim Brotherhood and its spiritual guide, Yusuf Qaradawi. In a sermon on Qatar TV back in 2013, on the topic of interfaith debate, Qaradawi said, “If you invite the Jews, I will not participate. I will participate in a Muslim–Christian meeting, but with the Jews there should be no debate.” I see no prospect of reform from Al Jazeera or Qatar’s leaders and imams.

Postal: How do you think a Biden–Harris administration would impact prospects for Middle East peace, and Muslim reform both at home and abroad?

Jasser: The Biden–Harris administration will reverse the progress the Trump administration made against Islamists domestically and abroad. I believe that Reema Dodin, selected to be a senior White House staffer for legislative affairs in a new Biden–Harris administration, is sympathetic to an Islamist worldview. She joined Muslim Brotherhood legacy groups CAIR and the Muslim Student Association as a college student at UC-Berkeley. She also stated, while at Berkeley, that Palestinian suicide bombers are “the last resort of a desperate people.” Given the above, at the White House, Dodin will likely contribute to policy in favor of appeasing Iran and other Islamist interests domestically and abroad.

Indications that the Biden–Harris administration will “de-emphasize” the Pentagon and the military at the expense of greater diplomacy is troubling. Weakening our military would invite more, not less, war in the Middle East.

Postal: How can the Muslim Reform Movement gain traction in the Middle East?

Jasser: A possible path for Muslim Reform in the Middle East is for countries in the Middle East to evolve from absolute to constitutional leadership that allows for civil society institutions to modernize Islamic thought, defeat Islamism, and promote universal human rights. The UAE and Bahrain provide hope for this model. I am less optimistic about Saudi Arabia relinquishing its interpretation of Islam even as the Saudis openly condemn and declare war on “political Islam.”

Postal: Recently, there were two terrorist attacks in Saudi Arabia: a stabbing outside of the French consulate and an Islamic State attack directed at French nationals wounding three in an Armistice Day ceremony at a cemetery. The Islamic State had previously threatened Saudi Arabia following its tacit support for the UAE and Bahrain normalization deals with Israel. What are your thoughts on these developments?

Jasser: Acts of terror and threats against Saudi Arabia, the UAE, and Bahrain are the beginnings of a much longer war. Normalization between Israel and some Arab states has weakened the Islamist platform considerably. For too long, governments of Muslim-majority countries have been radicalizing Muslims towards Islamism and its anti-Semitism. For example, Islamist and anti-Semitic Qatar and Turkey supports Islamist and anti-Semitic Hamas, which is the Palestinian branch of the Muslim Brotherhood. Many of the Gulf states are pulling away from the Palestinian national movement, and with it distancing themselves from the Islamism and anti-Semitism of both Hamas and Fatah/the Palestinian Authority. We hope that the UAE and Bahrain will serve as the catalyst for other Muslims who love their faith to ultimately defeat the ideology of Islamism.

The author would like to thank Dr. M. Zuhdi Jasser for participating in this interview.